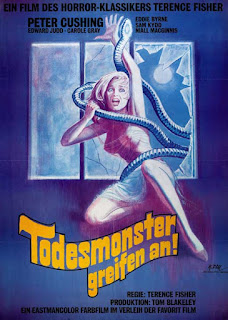 When it comes to science, there are a great many advances that can actually be attributed to someone messing up. Sometimes it's as simple as forgetting to put away a sample and discovering the fungus that grows on it can kill bacteria. Other times, the screw up just results in wasted research.

However, it takes a very special kind of fuck up to have your attempt to develop a cure for cancer release monsters that suck the bones right out of human beings.

Well, unfortunately for the residents of Petrie's Island off the coast of Ireland, their resident secluded scientist is one such fuck up. Dr. Lawrence Phillips (Peter Forbes-Robertson) has based his operation in a huge mansion on the island and when the film begins, he is just about to start an experiment--in coordination with a sister laboratory in Tokyo--that could very well mean the end of cancer.

Unfortunately for him, he's starting right before the opening credits of a horror film. The sound of breaking glass and the glimpse of his lab full of corpses clues us in that the only way he's developed a cure for cancer is if you consider "death" to be a cure.

Of course, the trouble with the cure that Phillips created is that it didn't simply kill everyone in his lab and then stay put. Alas, hapless farmer Ian Bellows (Liam Gaffney) hears a strange sound in a cave while walking along his property one evening. Investigating the sound proves to be a bad idea, though the extent to just how bad an idea it is only becomes clear when his wife alerts Constable John Harris (Sam Kydd) of his disappearance. It doesn't take long for the Constable to find Bellows and he immediately fetches Dr. Reginald Landers (Eddie Byrne) to take a look at the corpse in the cave.

After all, it isn't often you find a body where all the bones are missing.

Landers is utterly stumped, of course. He presumes it must be an unheard of disease, so he requests permission to borrow the island's launch from the head of the community, Roger Campbell (Niall McGinnis). He knows this will leave the island without a means to reach the mainland until the launch can be returned, but he fears it is the only way.

Well, when Landers seeks out famed pathologist, Dr. Brian Stanley (Peter Cushing), in London he finds that Stanley is just as stumped by the details of the case as he is. However, Stanley does know of a colleague who might be of some assistance--Dr. David West (Edward Judd), an expert on bones and the diseases that affect them.

Of course, West is currently busy attempting to canoodle with Toni Merrill (Carole Gray), a wealthy socialite, when they come by his place for a social call. However, West is willing to forgive the intrusion when Landers tells him the details. For her part, Merrill eagerly volunteers the use of her father's helicopter to get back to the island quicker.

Naturally, there's a hitch that isn't revealed until they've already made the trip: Merrill's father needs the helicopter back for some other business, so now the island is completely cut off from the outside world until the helicopter returns.

Sure, why not: what could go wrong?

After examining the corpse of Ian Bellows, West and Stanley find themselves no closer to an answer than before. All they can be sure of is that the bones weren't merely disintegrated but seemingly removed through microscopic punctures in the flesh. Once West and Stanley learn of Dr. Phillips being on the island, they decide to pay him a visit to see what assistance he can offer.

Of course, when they are forced to break into Phillips's mansion, they discover it is strewn with bodies in the same shape as poor Bellows. Hoping Phillips wrote something in his notes, they grab those and return to the hotel. However, after they leave the mansion, it's the poor Constable who discovers the source of the "disease." Landers had left him a note that they were going to visit Phillips, and after the Constable got a report of a boneless horse from another local farmer he went to fetch them. However, when he hears a strange sound in the basement of the mansion, he goes to investigate and is suddenly seized by a tentacle...

It isn't long before Landers, Stanley, West, and Merrill find themselves right back in that basement as well. And then they also meet the creature that killed the Constable, only it's worse than that because it's actually creatures. Later to be dubbed "Silicates" by our heroes, the fiends looks rather like starfish with a single squid-like tentacle snaking out of an opening in what seems to be the front of their carapace.

Well, seeing as how they're trapped by the creatures anyway, Dr. Landers grabs a nearby axe and tries to chop up a Silicate. It's a helpful experiment in that the heroes learn that axes don't even tickle a Silicate, and they get to witness how a Silicate feeds when it grabs Landers with its tentacle and sucks his bones out.

However, the others are spared because the Silicates suddenly retract their tentacles and become inert. This is good news in that they are now given the chance to safely get past the Silicates. The bad news is that the reason the Silicates went inert is so they could divide. So now there are even more bone-eating indestructible monsters on the island, and if our heroes don't think of a solution soon the whole island will soon be overrun...

There are few things quite so delightful as seeing Peter Cushing in a monster movie, but naturally it's much more delightful to see him in a good monster movie. And Island of Terror most definitely fits the bill there.

For one thing, while their design is incredibly simple and relatively cost-effective, the Silicates are marvelous creations. The way the monsters feed is terrifying enough, but they're also also noisy little bastards. Combine their unnatural vocalizations with the fact that they are slow but inexorable, and you've basically found yourself looking at Romero-style zombies if said zombies were also completely indestructible.

For another, the characters are genuinely engaging. That Peter Cushing is charming and likable is hardly a shock, since he could make even the biggest bastard come across as a plaeasant fellow. However, the rest of the cast is game for the task as well. Edward Judd comes across as rather unbearably smug at times, but the film also make sure to show that he is doing his damnedest to help the people of the island. Even Carole Gray gets her moments to shine, though she is rather annoyingly saddled with the role of being the frightened woman who has to cower and be protected. This was still the mid-1960s, after all, so if a woman insisted on coming along for a dangerous mission because she swears she can handle herself you'd better believe the movie was going to find a way to prove her wrong.

The story is also pitch perfect, setting up its climax perfectly. This is a wonderful case of a horror movie plot building from a few mysterious deaths to a crescendo of carnage. My "indestructible Romero zombie" analogy isn't very far off, since it isn't until late in the film that the heroes discover a way to kill the Silicates--but that means everyone on the island holed up in one building as the Silicates swarm around it, hoping that the solution kills the beasts before they can kill the islanders. Naturally, that means not every islander is going to make it out of this one.

Luckily for those of us outside the world of the film, the wonderful folks at Scream Factory put this one out on a great Blu-ray. I highly recommend picking it up as soon as you can.

It's also a great film to watch over a bowl of chicken noodle soup, as you might have noticed.

Welcome to Day Nine of Hubri5Ween 2017, the fifth year of this nonsense! Click the banner above to see what everyone else did for I!
Posted by Random Deinonychus at 6:00 AM