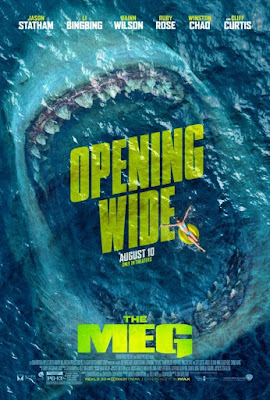 Considering what it takes to get a movie made, it isn't shocking that so many projects languish in development hell. However, few have languished quite so long in that Hell as today's film.

Steve Alten's novel Meg about a hungry Megalodon shark being freed from an ocean trench was published in 1997 and optioned for a film almost immediately. I read it at the time and, while it is far from a good book, it is a damn fun one. However, the promised film never materialized and every few years a new production would be announced and then it would fizzle out.

One of the last productions to fall short of completion would have seen Eli Roth at the helm of an R-rated, super violent and gory adaptation. For some reason, a lot of people were disappointed that instead of that trainwreck, we got a PG-13 film where Jason Statham and Li Bingbing lead an old-fashioned monster adventure story.

I am not one of those people.

In fact, when I saw how light-hearted the ad campaign for this film was, I was delighted. I mean, just look at the poster above: that cheeky tone for this kind of movie is perfection.

The early reviews were not very positive, but I wasn't going to let that daunt me. I was even lucky enough to manage to see it on opening weekend.

And I must say, critics these days really have lost their sense of fun.

To be fair, to some it might be disappointing to learn that someone told the filmmakers that the Megalodon did not live at the same time as the dinosaurs. So instead of the novel's prologue where a Meg takes down a Tyrannosaurus Rex to prove how badass it is, the film opens with a submarine rescue mission led by Jonas Taylor (Jason Statham).

Jonas and his team are trying to get out as many trapped sailors from a downed nuclear submarine as possible before the sub fills with water or is crushed by the depth. However, something seems to strike the submarine while two of his team are still inside. Jonas makes the hard decision to disengage the rescue sub when he feels that waiting for the other men to get back to the hatch will get everyone killed.

The team's doctor, Dr. Heller (Robert Taylor), believes that Jonas was suffering from psychosis and imagined the impact--and is thus responsible for the deaths of two men. Jonas, naturally, resigns in disgrace.

Naturally, you can set your watch to count down the minutes until our hero gets his vindication. Especially since we fast forward to five years later, at the underwater research facility Mana One. The facility is bankrolled by billionaire Jack Morris (Rainn Wilson), who has arrived to watch the historical mission about to take place.

Under the supervision of Dr. Minhway Zhang (Winston Chao) and his oceanographer daughter Suyin Zhang (Li Bingbing), a submersible will be going down into the Marianas trench to test a hypothesis the two have: that the "bottom" of the trench is actually a layer of hydrogen sulfide that hides a whole other world beneath. The crew of the sub that will be piercing this veil consists of Toshi (Masi Oka), a fellow reasonably nicknamed "The Wall" (Olafur Darri Olafsson), and Lori (Jessica McNamee).

You've probably already guessed that Lori is Jonas's ex-wife. And within mere minutes of making their way into this new world beneath the veil, their sub is going to be disabled by a mysterious large creature. They survive the attack, however, but they cannot return to the surface without aid.

Dr. Heller is also on board Mana One, so he strenuously objects when James "Mac" Mackreides (Cliff Curtis) suggest that Jonas is their only hope. However, they don't have time to argue. Jonas is fetched from his self-imposed exile in Thailand, where he has fallen into the sort of old-fashioned "comical" alcoholism that can be immediately shaken off when the character needs to get serious.

Also, fair warning, you will get the Thai cover of "Hey Mickey" in this sequence stuck in your head.

Suyin is too impatient and heads down in another submarine right before Mac and Zhang return with Jonas. She finds the wrecked sub, but she finds herself in need of rescue when a giant squid grabs ahold of her sub and begins crushing it.

Jonas isn't fast enough to rescue her, however. No, she is saved when the squid becomes the meal of an immense shark--and Jonas recognizes it as a Megalodon. The presence of the Meg makes the rescue that much more difficult, since the lights of the subs have lured the creature to them. Lori has been seriously wounded by the time Jonas gets his sub docked with the wrecked one, and it's a race against time to get everyone loaded into the rescue vehicle before the Meg circles back.

It's a race that they have no hope of winning. Toshi realizes this and makes the hard call to lock the hatch behind everyone else and draw the Meg to him. The others are able to escape in Jonas's sub as the wrecked sub is smashed into a thermal vent and explodes.

Unfortunately, that incident means that the horror is not over for our heroes. Oh, sure, they have a little time for Jonas to get to know Suyin and her adorable daughter Meiying (Shuya Sophia Cai) a bit better--including an amusing scene where Suyin walks in on Jonas in nothing but a towel. However, when Meiying is playing with a remote controlled toy in the submerged glass viewing tunnel of the facility, she comes face-to-face with the Meg.

Luckily, the glass is too tough for the Meg to bite through, but it sure tries. And unfortunately the humpback whale and her calf that hang around the station aren't shark proof, so Suyin, Mac, Jonas, and Meiying get to watch them get devoured by the Meg.

Jaxx Herd (Ruby Rose), one of the station technicians, figures out that the thermal vent explosion must have temporarily punched a temporary "hole" in the layer of hydrogen sulfide that was warm enough to allow the Meg to pass through. Now our heroes know that they have to track down the rogue shark and kill it, before it can cause untold damage to an ecosystem it no longer belongs to.

And that's not even taking into account what the beast could do if it made its way to a crowded beach...

There aren't very many surprises in The Meg, but there are actually a few that I really enjoyed. For starters, the relationship between Lori and Jonas. In most media, exes who are reunited either are destined to get back together or still have some kind of animosity between them. Indeed, Lori's character in the novel was a cheating, ruthless reporter whose ultimate grisly death at the teeth of the Meg we were clearly supposed to see as deserved.

Not so here. Not only does Lori not have to die in order to make room for the inevitable romance between Jonas and Suyin, the exes are portrayed as two people who genuinely still care about each other but just weren't right as a couple. They're still good friends and, what's more, Lori is one of the loudest voices pushing Jonas to go for a relationship with Suyin.

That's especially welcome in a climate as steeped in misogyny as 2018 has been. Sure, most of that was in real life and not in films, but this is still the year that Mako Mori got fridged, for fuck's sake.

As for the rest of the film, while the CGI is not exactly groundbreaking in its realism, the shark looks great. I particularly like that they didn't just make it a big Great White, but based it on more distinctive species like tiger sharks or bull sharks. I also always appreciate working in a giant squid, so this film knows how to pander to me.

It's also worth noting that the shark's defeat is memorable without going for the novel's incredibly silly climax. In a way, this ending pays homage to it but isn't completely goofy.

It is true that the PG-13 rating does reduce the amount of human gore we are given, but for my money the film still does a pretty great job of delivering mass carnage when the shark goes on the attack. Sure, this isn't exactly Piranha 3D, but that really isn't a negative in my estimation.

Frankly, after 20 years, I would have been pleased if The Meg was merely watchable. However, I genuinely had a blast with this film. Luckily, the box office shows I am not the only one, which means we may be due for a sequel before you know it. I gladly welcome it.

Even if it may mean we get Kronosaurs with inexplicable gills, like in the novel's sequels. Who knows, maybe on film that won't be too utterly stupid to enjoy.

This has concluded Day 13 of HubrisWeen 2018! To see what the other Celluloid Zeroes chose for M, click the banner above!
Posted by Random Deinonychus at 4:00 AM