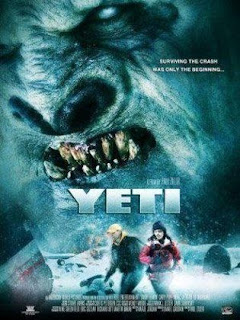 Y is a surprisingly tough letter to find a movie for. I considered using a Scrabble tile for this one, but I couldn't resist checking out a film about a man-eating Yeti attacking plane crash victims.

As I made pretty clear when discussing Terrordactyl, there's a reason I don't watch SyFy Original Movies. Bad movies can be a lot of fun, but the fun usually comes from a feeling that the people making them were genuinely trying to make something good but just couldn't.

SyFy movies, though, are something else completely. They're bad in a calculated, "let's just get this over with" kind of way. Hell, sometimes they just come across as lazy.

And lazy really describes Yeti in far too much of its running time. Which is a real shame, because there was genuine potential in the premise.

The true laziness of this film is made plain in its opening sequence. For no apparent reason, we open sometime in the 1970s as a few guys apparently hunting the Yeti make their way into a cave--and are promptly killed by the very beast they were hunting. This sequence has literally nothing to do with the rest of the film and clearly only exists to give us some Yeti action at the very opening.

Worse, it means that the film ignores the cardinal rule of a movie like this: you never show us the whole monster right away. Yet, less than five minutes into the film, we already know that the Yeti is a very shabby man in a suit. Unfortunately, it will also be rendered by some truly pathetic CGI in random sequences, in case the suit wasn't silly enough.

Also, not only is the suit goofy looking, it doesn't fit the creature it's supposed to be. A character will later theorize that the Yeti is a surviving Gigantopithecus, an actual species of extinct great ape that was roughly 9 feet tall when standing upright. However, the Yeti here looks nothing like any kind of ape. Not only does it have a weirdly cat-like face, it has only three fingers on its hands!

At any rate, our story proper begins on a plane of an American high school's football team. They're on their way to a game in Japan, which for some reason requires them to fly over the Himalayas. I'm no expert, but I don't think any plane route would go that way.

Naturally, the plane crashes and the survivors have to try and find a way to survive the elements and not starve until they're rescued. Meanwhile, the Yeti keeps coming to the crash site to drag off the corpses of the dead to feed on.

I honestly don't care enough about the characters to try and tell you anything about them, but naturally there is one guy who is set up as a dick because he hides some candy bars and suggests that they need to turn to cannibalism to survive. However, he's kind of got a point.

Also, one of the survivors is an Asian woman with dreadlocks, which is...a hell of a thing.

Said Asian woman with dreadlocks also dooms them all because she feels the dignity of the dead is more important than their survival. After the group eats part of one corpse, which she refuses to take part in, she burns all the other bodies. Not only does this deprive them of food, but as the jerk pointed out it also deprives the creature they've already glimpsed carrying off bodies in the night.

The Yeti attacks, kills several of the survivors, and then demonstrates a truly hilarious leaping ability to carry off the designated hero's love interest. For some reason the Yeti suddenly wants to spoon with her instead of eating her face. Considering there's a second Yeti in the cave when she wakes up, maybe they just wanted to swing?

Luckily for her, SyFy Channel movies are only gory, not sexual--so she's in no danger of things taking a Night of the Demon turn. Also, the two mountain rescue characters finally meet up with the survivors and help them kill both Yetis in an improvised tiger trap. However, the group has to flee an avalanche that comes out of nowhere--and then one of the Yetis proves to still be alive.

The surviving Yeti quickly kills the jerk and the two mountain rescuers, until the survivors succeed in spearing it off a cliff. A helicopter shows up to save them...and then we get a really dumb stinger ending when a character supposed to be dead turns out to be alive, only to be confronted by another still living Yeti. It's so incredibly lazy.

Still, I gotta give the film this--it's not often a body count flick ends with 4 survivors, and two of them are the token black guy and Asian woman.

There's honestly not a lot to say about Yeti, as far as bad films go. It does have a few moments where I found myself laughing at its badness, but for the most part it felt like a perfect movie to watch while doing laundry or some other menial task. There's absolutely no danger of becoming invested in what's happening, after all.

It really is a shame, however, because the concept of airplane survivors having to essentially fight a man-eating Yeti in order to eat their dead companions for survival is kind of amazing. Think of the potential for dark comedy alone!

However, the film does hardly anything with such a great premise. It's almost frustrating, except the film is so blandly bad that it's impossible to feel much of anything towards it.

Maybe some day we'll get lucky and someone who actually gives a shit will rip off the concept, with an actual eye toward exploitation and dark comedy. Not going to hold my breath, however.

Welcome to the Day Twenty-Five of Hubri5Ween 2017, the fifth year of this nonsense! Click the banner above to see what everyone else did for Y!
Posted by Random Deinonychus at 6:00 AM