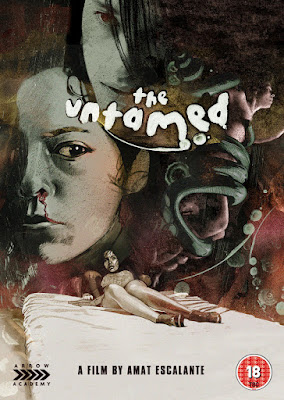 When The Shape of Water was released, I was a bit astounded by how many people were simply unable to get past the core premise. Namely, a woman having consensual sex with a monster. While I can totally understand that idea not appealing to a majority of the population, it did seem like the reaction was much more horrified than even films like Humanoids From The Deep or Galaxy of Terror inspired, and those were films about monsters that sexually assault women!

I bring this up, because today's film would really make those who recoiled at Guillermo del Toro's tasteful fairy tale clutch their pearls. Not only are we shown multiple people having consensual sex with a monster, but the monster's genitals are not merely described for us after the fact.

Of course, I wish I could say that the movie was even half as good as The Shape of Water. Unfortunately, I would have to settle for a much smaller fraction.

Part of the problem is that it seems like the more salacious a non-exploitation film is in certain scenes, the more it feels the need to make everything else as languid and deliberately paced as some kind of contrast. This film has multiple graphic sex scenes--whether the participants are human, monster, or animal--and so the film around those sequences goes too far past languid and ends up dull.

The plot of the film is very straightforward, but is much more dragged out than it needs to be. Somewhere in Mexico we meet Veronica (Simone Bucio). Veronica is a beautiful young woman who helps out an elderly couple, both apparently scientists. How does she help them?

Oh, she has sex with the tentacled monster they keep in their barn.

Veronica is a very willing participant, but that is part of the problem. Sex with the creature seems to be incredibly addictive, but lately the monster is becoming more aggressive and dangerous. After the latest session, Veronica leaves the barn with a terrible bite on her side--despite the creature not having any obvious teeth, much less a mouth--and has to pass it off as a dog bite when she goes to the hospital.

At the hospital, Veronica meets nurse Fabian (Eden Villavicencio) and almost instantly bonds with him. She'll be turning his life upside down soon enough, but as it stands currently Fabian already has a crazy life. His sister Alejandra (Ruth Ramos), or "Ale", is stuck in a passionless marriage with the father of her two children, Angel (Jesus Meza).

Part of that lack of passion may be because Angel is secretly having sex with her brother. In public Angel naturally puts on a horrifically homophobic facade before he sneaks away in private to bend over for Fabian. They have a "switch" arrangement, you see--and boy will you ever see if you watch this.

Fabian seems like a decent fellow, otherwise, but he can't resist Angel and he has tried to simply bury his guilt. However, after hanging out with Fabian a few times and getting to meet Ale and Angel, Veronica decides that Fabian should come out with her to see the barn.

One (surprisingly unseen) session with the beast is somehow enough for Fabian to break things off with Angel, which Angel does not take well. Unfortunately for Angel, this means he is witnessed having an argument with Fabian outside of the hospital.

It therefore looks bad enough when Fabian is found naked, beaten, and near death in a field. It looks much, much worse when Ale goes with Veronica to collect some of Fabian's things from his apartment and discovers messages from Angel on her brother's phone. Messages that start off sexual and then become threatening and full of slurs and promises of violence.

So into jail Angel goes, on suspicion of beating Fabian into his current comatose state--on both the testimony of witnesses who saw him arguing with Fabian and the evidence of his own poorly thought-out text messages. Poor Ale is left to deal with her jailed husband's homophobic parents, managing her poor children without telling them too much, and deciding whether to take Fabian off of life support or not.

Veronica decides this means it is a perfect time to take Ale to visit her friend.

The old couple try to explain to Ale that they found the creature in a crater not far from the farm and have been studying it ever since. In a neat, albeit unsettling visual, we see that said crater is perpetually full of copulating animals of a wide variety of species from goats to Gila monsters--all apparently drawn there by the essence of the creature.

The old couple give her tea to relax her and then they introduce her to the creature. It seems to go very well for Ale, to Veronica's obvious envy. Even though Ale figures out almost immediately that the creature put her brother in a coma, she can't bring herself to hate it or blame it for what happened.

Unfortunately, blame or not, by the time the credits abruptly roll, the monster will be responsible for several deaths...

I really wish this was a film I could recommend. I really admire what it is trying to do, since there is something to be said for how a film like this forces us to confront our views on sex and violence. There are also some truly beautiful shots and great little character moments. I am particularly fond of when we see Ale crying on the couch while her young son watches a zombie movie on TV--one I don't recognize--and he misunderstands her tears and comfortingly tells her, "It's okay, mommy; zombies aren't real."

Unfortunately, for most of the running time this film is so Goddamn boring.

The amount of wheel spinning in this film makes Under The Skin seem tightly paced. Though, at the same time I at least don't feel like the director was just pointing his camera at random people. The pacing of this film is very intentional, and unfortunately the pacing that was chosen is a terrible fit.

It's especially a shame, since the monster is really well done. Someone invested a lot of time and energy into that thing, and the effects used may not be flawless but they look very good.

This has concluded Day 21 of HubrisWeen 2018! To see what the other Celluloid Zeroes chose for U, click the banner above!
Posted by Random Deinonychus at 4:00 AM