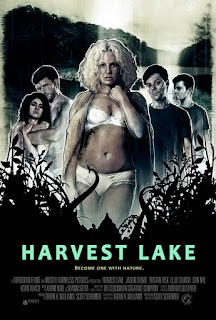 So a film like Harvest Lake is hardly unique in that sense. Yet, something about the film caused Amazon to pull it from their streaming service without warning. Most reports on this seemed to feel the film was considered too sexually explicit, but I can't say if that was the reasoning behind its removal or not.

However, it wouldn't surprise me one bit if it were. For one thing, most horror films about sexuality tend to be rather implicitly sex negative. Harvest Lake, on the other hand, doesn't seem to view sex with any level of judgment--even though sexuality is the instrument the film's seemingly malevolent force uses to control and destroy its victims. Sexuality is just a part of human nature, after all, and it's ludicrous to condemn people for having that nature used against them.

More distressingly, I can't help but think that the film's willingness to portray homosexual sex as frankly as it does the more "acceptable" hetero variety may have also been a factor in Amazon's squeamishness. I hope I'm wrong about that.

We get a good sense of how frankly this film deals with sexuality right off the bat, as we are introduced to an unnamed couple (Lucretia Lynn and Derek Sturgeon) in the woods. The two quickly disrobe and make love in the woods, affording us something not often seen in the opening minutes of a horror film--full frontal male nudity. The two then doze off, but when they awaken they seem to be in some kind of a trance. They both eagerly imbibe a strange liquid dripping from some leaves, and then wander to the banks of a lake. Without any hint of hesitation, they wade into the lake until they disappear from view...

Well, to be fair, she also asked him to come because Josh has just gone through a bad break up and she felt it would be good for him to be among friends. Though perhaps Ben's suggestion that Josh should take advantage of his singleness to "whore it up" is a bit less than helpful.

However, things will get even weirder at the lake because it isn't long before whatever lives beneath the water senses their presence and begins to work its influence on all of them.

Ben and Cat wander off and find themselves individually entranced by bizarre fungi so blatantly based on a vagina and a penis that Freud would say to tone it down. Josh finds himself unable to resist touching himself, as does Jennifer. Except Jennifer does it underwater, and quickly finds some extra friendly tentacles giving her some assistance--right up until they pull her under the water.

Josh breaks the trance first, and when he finds some cast-off swimsuits covered in strange slime he calls out for the confused Ben and Cat. Jennifer also joins them, but it does seem odd that the way she covers herself with her towel almost seems to imply she's naked under it--and that sure does look like her body floating in the lake as the group heads back to the cabin.

That night at the cabin, the group finds themselves joined by handsome stranger, Mark (Kevin Roach). A quick game of Truth or Dare reveals that Mark has the hots for Josh. One passionate kiss and soon the two have said good night to the others so they can go back to Mark's tent and, uh, get to know each other better.

There really isn't a lot to Harvest Lake, since it only runs 78 minutes. However, that's definitely one of its strengths. I've seen it compared to Under The Skin and it definitely is like what that film would have been if it hadn't spent so much of its runtime spinning its wheels.

Even in its short running time, the film does a great job establishing its characters and that something is not right in this lake and its surrounding woods. Sure, the characters aren't really any more realistic than the average spam-in-a-cabin group, but they feel like actual characters instead of just expendable meat.

It's true that we don't really get a lot of insight into what exactly the force that's threatening them actually is. Unlike the frustrating vagueness of The Bye Bye Man's mythology, however, this is a story where we don't really need to know. There's something in the lake and it is clearly ancient and hungry--albeit seemingly not in the traditional fashion of monsters that prey on humans.

Of course, one of the many things I love about this film is that it shows that there are still gems to be found in micro-budget cinema. Harvest Lake is a very independent production, but it rarely shows in the film itself. Sure, some of the performances are a bit more stilted than you might find in a studio production and the one-eyed humanoid form the monster takes seems to be constructed of black garbage bags covered in goop. However, the film looks great and is filmed with a polish that even studio genre fare sometimes lacks.

I often find myself wanting to support indie horror films and coming away disappointed whenever I do, but Harvest Lake is good enough that it definitely made me a believer in its studio, Bandit Motion Pictures. Sure, like any studio their quality varies--I loved this film but was disappointed in Space Babes From Outer Space, which I will speak to at a later date--but I definitely will be digging deeper into their catalogue now that I've seen what they can deliver.

I highly recommend you do the same, dear reader.

Welcome to Day Eight of Hubri5Ween 2017, the fifth year of this nonsense! Click the banner above to see what everyone else did for H!
Posted by Random Deinonychus at 6:00 AM