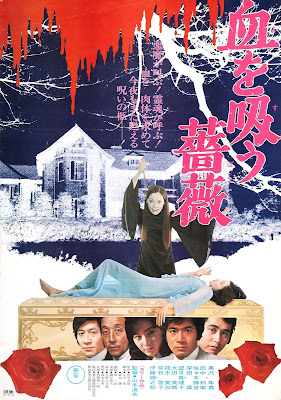 One of the challenges of HubrisWeen is that if you choose to do a series of films, you aren't always able to do them in the correct order. Today's film is a casualty of that, as I knew I wanted to talk about "The Bloodthirsty Trilogy" this year, and today's film is the third film of that trilogy. The upside is that the trilogy does not have any shared continuity, so you can start at any point without missing anything.

For those unfamiliar, "The Bloodthirsty Trilogy" are three vampire films released by Toho Studios in the early 1970s: The Vampire Doll, Lake of Dracula, and today's film, Evil of Dracula. They were fairly obscure in the West for many years--I had never even heard of them until I read about them in Stuart Galbraith's The Monsters Are Attacking Tokyo in the late 1990s.

Thankfully Arrow Video put out an excellent Blu-ray release of them earlier this year and I was finally able to see what happens when Japanese filmmakers put their unique spin on the Hammer vampire formula. Naturally, the result is fairly bizarre.

It's worth pointing out that today's film is easily the closest to what a Western viewer would consider a "traditional" vampire film, and even it is bonkers.

I joked to my wife that a better title for this film would be "Dracula's School for Girls," since we open with Professor Shiraki (Toshio Kurosawa) arriving in a rural village to accept a teaching position at a private school for girls. He is met at the train station by the rather off-putting Professor Yoshi (Katsuhiko Sasaki, best known as the inventor of Jet Jaguar in Godzilla vs. Megalon), who drives him to the school.

Along the way, they pass a wrecked car and Yoshi far too calmly tells Shiraki that the car was struck by a drunk truck driver just a few days ago, killing the current principal's wife. Shiraki is in for an even bigger shock when he meets the Principal (Shin Kishida, best known as the "Scandal Hunter" Interpol Agent in Godzilla vs. Mechagodzilla and he is sort of reprising his role as "Dracula" from Lake of Dracula), because not only does the man seems very casual about his wife's death, but his first action after offering Shiraki some brandy is to tell the teacher that he was actually brought to the school to replace the Principal.

Principal Dracula (he is never actually named that I noticed, so I will just call him Dracula) claims his health is fading after the death of his wife and he needs to hand over the position to someone as soon as he can. Shiraki, naturally, thinks it is highly irregular to be offered such a position when he hasn't even proven himself as a teacher there, but Dracula assures Shiraki that staying at the school for the remainder of the school year will give him a chance to get acclimated and take over from the acting principal, Hosoya (Kazuya Oguri).

Oddly, Shiraki never seems to ask why Dracula didn't just have Hosoya take over, but maybe the acting principal's advanced age is supposed to make him seem like an unlikely replacement.

Dracula also mentions during their conversation that his wife's body is currently being kept in the basement, in observance of a peculiar local custom where a body is not interred or embalmed on the off chance that the deceased may return to life. Shiraki takes that awfully in stride in the moment, but that evening he is woken from a fitful sleep by someone singing--and he finds a young woman in a diaphanous blue nightgown (Yaskuo Agawa) standing by a window.

That's weird enough, but when she turns to him he sees that she is bleeding from two pinpricks on her bare breast. And then the Principal's dead wife (Mika Katsuragi) appears, sprouts fangs, and floats across the hall towards the horrified Shiraki. He manages to knock himself out in his attempt to get away--and since he comes to in his bed with the sun streaming in the window, he chalks it up to being a very vivid dream. I mean, sure, the girl in the blue nightgown was an odd detail, but he'd seen a painting of the deceased wife earlier.

Still, things get weirder from there. Shiraki doesn't seem at all shocked that the three students he meets the next morning are inappropriately flirtatious with him. However, he is awfully dismissive (and more than a little victim-blamey) of Kyoko (Keiko Aramaki), Yukiko (Mio Ota), and Mariko (Kumi Saijo) when they point out that Professor Yoshi is always creepily staring at them. Even Shiraki can't ignore that Yoshi responding to his greeting by quoting poetry in a weirdly reverbed voice is odd, though. He's more troubled by the girls' mention of a friend who went missing, named Keiko--especially when they mention that she usually wore a blue nightgown.

Shiraki also makes a faux pas when he goes into the basement to view the dead wife's casket and actually opens it. Frankly, this seems disrespectful enough that I'm a little on Principal Dracula's side when he angrily appears to confront Shiraki and tells him that he is committing sacrilege against the dead. Of course, Shiraki apologizes and leaves--which means he had his back to the casket when the wife opened her eyes and bared her fangs...

Shiraki is perhaps a little too happy to make the acquaintance of the more seemingly normal Dr. Shimomura (Kunie Tanaka) that evening. However, Shimomura is his own brand of peculiar. For one thing, he lives in the local village and has used that as an opportunity to catalog the area's prolific legends and superstitions. He's also shockingly casual about the fact that not only is he aware of Keiko going missing, but that the school loses at least two or three students every year.

Shimomura blames this on the fact that the school and its quaint surroundings become too dull for the girls after a while, but naturally the locals blame demons and even vampires. Shiraki isn't totally convinced that Shimomura's "logical" explanation adds up, and he becomes even more skeptical when he goes digging and finds a picture of Keiko. Sure enough, he saw her in his "dream" despite having had no way of knowing her face beforehand.

Unfortunately for the students at the school, Shiraki isn't sure what to do with this information yet. So when Kyoko goes wandering the halls looking for him that evening, she pricks her foot on a white rose in the hallway--and then she is startled by Principal Dracula. Before she knows what to do, he has bared his fangs and sunk them into her breast.

Naturally, she is not feeling well the next day and collapses during Shiraki's lecture on Rorschach's inkblot test, after seeing one makes her hallucinate. When Shiraki accompanies his students to Shimomura's office, he notices two familiar punctures on her chest. Shiraki later confides what he saw to Shimomura, and the doctor begins to let him in on the town's folklore.

And it will prove to be some wild stuff, dating back hundreds of years to when a European sailor survived his shipwreck near the village only to be tormented by the villagers for being a Christian. He fled into the desert, renounced his God, and then drank his own blood--turning himself into a vampire. A vampire that then attacked a young farm girl and turned her into a vampire, too.

And that was merely the beginning of a legacy of evil that even Shimomura has not grasped the nature of. Shiraki better put the pieces together soon, however. All the girls have gone home for holiday except for the ill Kyoko and her loyal friends, Yukiko and Mariko, who stayed to help nurse her back to health. Not only are they all very vulnerable now, but Shiraki has not fully grasped that he is in grave danger as well.

After all, the Principal was very sincere in his offer to have Shiraki take over his position. However, he just left out the fact that Shiraki wouldn't actually survive the transfer of power...

A lot of the plot beats of Evil of Dracula will feel fairly similar to anyone who has seen enough Hammer vampire films., which is not actually a bad thing. However, when this film deviates from expectations it does so with gusto. I've seen a lot of vampire movies, but I can't recall any others about a pair of vampires that keep themselves hidden in plain sight by removing the faces of their victims and assuming their identities.

The film is not horribly gory, but it does not shy away from the bloody and gruesome aspects of that process, either. I particularly like the use of shadows to indicate a raven is picking at the skinned face of one victim.

While I'm obviously spoiling some of the aspects of the film, I am also cutting my synopsis very short because I think the twists and turns deserve to be experienced first hand. This is just a delightful film, plain and simple. It's full of atmosphere and set-pieces that keep the viewer just slightly off-balance from frame one. I'd even say that the score by Riichiro Manabe, of Godzilla vs. Hedorah infamy, adds to this. It's just as surreal as his Godzilla scores, but it fits the material much better.

There's also something to be said for the fact that the movie manages to remain interesting even when we're spending most of it several steps ahead of the hero and waiting for him to catch up. After all, despite some of its outrageous reveals, this is still a very traditional vampire film in many ways and I would say that that works in its favor. After all, sometimes it's nice to appreciate that a movie is not trying to "outsmart" you and just wants to tell an old-fashioned horror story.

Of the trilogy, it's hard to say that this is the absolute best--you'll have to wait and see which one that honor should go to--but it is my favorite. I highly recommend this one. Plus, if you're a Godzilla fan, you'll love seeing some familiar faces and hearing familiar Toho Studios sound effects being used in a horror movie setting!

This has concluded Day 5 of HubrisWeen 2018! To see what the other Celluloid Zeroes chose for E, click the banner above!
Posted by Random Deinonychus at 4:00 AM