Okay, hate is too strong a word. I am "Passionately Indifferent" to Ultraman. For no apparent reason I cannot bring myself to have an interest in Ultraman. I have watched precisely two episodes of Ultraman, and the second one only because its "monster" was just Godzilla with a frill on his neck.

So, yes, despite my love of giant monsters, Ultraman has no draw for me. Also, for no apparent reason, I am not drawn to Martial Arts films in general. Yes, I enjoy the ones I have watched, but as a whole it isn't a genre I seek out.

So, you can see why I was not immediately drawn to the Shaw Brothers-produced, Ultraman-style superhero film Inframan (aka Super Inframan). I had heard great things about it, but it was just not my thing. I had no real desire to track down a copy.

And then, I was talked into buying it. Nerd peer pressure is a very serious problem in our society. Happily, it usually ends in you finding something you didn't even know you were missing.

There is no way to logically explain the opening of this movie, so I'll merely summarize: A van or bus full of school kids is driving along a cliff-side highway when a dragon or pterosaur lands on the road in front of them. This causes an earthquake that cracks open the cliff. The driver is barely able to get all the kids off safely before he and the bus plunge off the cliff. And then a city somewhere erupts in flames.

No, I haven't the faintest clue how the two events are connected.

This series of bizarre catastrophes has, naturally, captured the attention of the Chinese government. Professor Chang (Hsieh Wang) rushes to the futuristic Science Headquarters, where everyone wears a silver jumpsuit, machines go "ping!" regularly, lights flash in sequence, and everything is powered by punch cards. There is dialogue back and forth about "monsters" so possibly we missed a scene where there was more than just the one dragon monster attacking stuff.

A dire report comes in that the extinct volcano "Mount Devil" has erupted and 10,000 people are dead. Then an earthquake hits the base. The Professor orders all scanning equipment to pointed at Mount Devil--and The Professor made the right call. Dirt and rock crumble away from Mount Devil to reveal a totally bitchin' dragon fortress. And then a gargoyle-like dragon appears on the bases's viewscreen, before morphing into a beautiful blonde Chinese woman dressed in what can best be described as viking dragon armor.

Our new beautiful overlord (Terry Lieu) introduces herself as Princess Dragon Mom--no, seriously--and advises that humanity must surrender at once or she will destroy us. This is our last warning. The Professor orders somebody to get a printout on Princess Dragon Mom and then asks for Rayma (Danny Lee, aka Li Hsui-Hsien) to be called. Rayma gets the call as he is manfully rescuing a baby from a burning building.

At a cabinet meeting, the presiding official delivers a truly immortal line of dialogue, "Gentlemen, the situation at this time is so serious that it's the worst in human history." It has been determined that the Princess and her monsters are not aliens, but rather prehistoric monsters. The Professor is ordered to find a way to defeat them.

Speak of the devil, at her super villainness lair Princess Dragon Mom is cracking the whip. Literally, her right hand looks like a Graboid tongue and has a long whip coming from its mouth that she uses to summon her creatures: her second-in-command, She-Demon (Dana Shun Shuk Yee), a woman in horned silver armor who has eyes in her palms; Nemesis, a toad-like monster with a drill for a hand; Plant Monster, a green tentacled monster who looks like a melted Oogie Boogie from The Nightmare Before Christmas; Spider Monster, who actually looks like a beetle man; Long-Haired Monster, a laser-powered witch demon with horns and, obviously, lots of long hair; Fire Dragon, a scaly humanoid, horned beast who spits fire; and the Iron Armor Monsters, two creatures with spring-loaded maces for arms and heads. She is also surrounded by her Skeleton Warriors. She announces with glee that it is now their turn to reclaim the Earth.

The Professor has a plan, however. He takes Rayma into his secret laboratory to show him his plans for Infra-Man, an indestructible cyborg soldier. Rayma immediately volunteers to become Infra-Man, despite the professor's warning that he will suffer and possibly die. The Professor picked an unfortunate time to begin the process of turning Rayma into a cyborg, as Princess Dragon Mom decides that Science Headquarters needs to be destroyed and she sends Nemesis and Plant Monster to do it. Nemesis first kidnaps one of the base's personnel, Chu Ming (Wen-wei Lin), and then Plant Monster buries himself under the cement outside the base--and then sends gigantic tendrils up out of the ground to attack the base.Which means the poor expendable bastards have to keep the base's power supply active during the monster's attack, or the Infra-Man process won't be completed and Rayma will die.

The process is a success and Infra-Man demonsstrates hhis power by...wrecking The Professor's lab. Ingrate. The Professor is delighted, though. Infra-Man can sense the monster fight going on and immediately flies to the rescue--whereupon in the vicinity cries out, "Infra-Man! It's Infra-Man! He's here!" Which is pretty impressive, given two minutes ago he was a top-secret project!

Infra-Man's senses allow him to find the Resident Evil-boss weakness of Plant Monster--a heart inside one of the giant tendrils--and blowing it up causes Plant Monster to return to his regular guy-in-a-suit self. Despite having an explosive acid spray and the ability to teleport (!), Plant Monster is laser-beamed to death by Infra-Man. Meanwhile, Princess Dragon Mom has She-Demon brainwash Chu Ming so he can be used against his comrades.

Back at Science Headquarters, The Professor tells Rayma that Infra-Man needs several upgrades to ensure he defeats the Princess and her monsters, leading to the immortal exchange, "For success it's essential that you have Thunderball Fists!" "I can have such a thing?" If you don't love the film before that exchange, you will after you hear that.

Chu Ming returns to the base looking suspiciously zombie-like, but other than The Professor advising he be watched, nobody seems to find anything odd about his return from capture. So Chu Ming is able to use his glowing eyes to overpower a guard and steal the professor's schematics for Infra-Man. Luckily, another guard catches Chu Ming in the act and pursues him--only to be waylaid by Spider Monster and the Skeleton Warriors. The ordinary human holds his own against the Spider Monster and the Skeleton Warriors pretty well until the monster spits a bomb at him that encases him in a web. Rayma shows up with several of the other base personnel in tow--but they're quickly webbed up and Rayma must turn into Infra-Man to take on the fiends.

The Long-Haired Monster shows up, but Infra-Man makes relatively quick work of it. This enrages Spider Monster, who grows to 50 feet in height. Not about to be beat that easily, Infra-Man pulls a Jet Jaguar and also grows to 50 feet in height. The two grapple, but after being tossed into a nearby transformer Spider Monster returns to his normal size and the still-giant Infra-Man stomps him like, well, a bug. Princess Dragon Mom is getting real sick of Infra-Man's shit, but a defect she discovers in the design of Infra-Man's hands could mean victory for the side of Prehistoric Evil.

You really can't undervalue how delightful this film is. For those of us entrenched in an age where even fucking Superman has to be a gritty, dark epic this film stands as a candy-colored testament to the fact that once upon a time a film could be about mutant monsters destroying the world with mention of thousands of casualties and still be light-hearted and fun. We have no scenes of Rayma agonizing over how being a super-powered cyborg has kept him from ever having a normal life. Instead, he is delighted at the idea of getting Thunderball firsts!

The film's budget certainly betrays it in a lot of ways. For instance, Spider Monster is clearly wearing shoes. However, they've clearly spread it around as much as possible. With a wide variety of nifty monsters with a wide variety of powers, awesome sets, and even a few exploding miniatures. There's no question that those involved in the film wanted to make it as entertaining as possible. And what entertainment the filmmakers didn't provide on their own comes courtesy of the dubbing. Normally I always recommend watching a film in its original language with subtitles, but the dubbing for this is such a delight.

To describe the film as episodic would be putting it lightly. If I didn't know better, I'd assume it was like Attack of the Super-Monsters and actually a bunch of TV show episodes edited together to make a movie. However, that really just adds to its charm. This film is an excitable 7-year-old describing their idea of what an awesome movie would be, and while that kind of film can sometimes be exhausting--as it was when I first saw Starcrash--there is something immensely endearing about it.

Quite frankly, if you can watch this film and not love it completely, then I don't know if I need your negativity in my life.

I had been working on this review off and on since I picked up the film, but with Sir Run Run Shaw, the film's producer, having passed away on January 7th, 2014, at the ripe old age of 106: I figured now was a great time to finish it up. 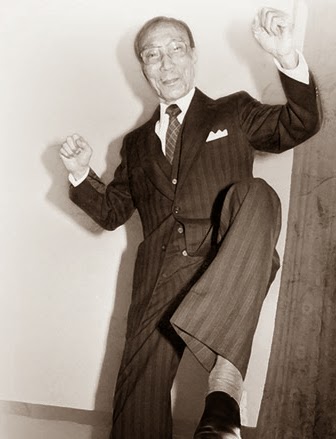 Farewell, good sir, as a producer you brought many forms of joy to the world. From Martial arts epics, to Legend of the Seven Golden Vampires, to freaking Blade Runner--you had an indelible impact on the world of film. May flights of Thunderball Fists carry you to your well-earned rest.


Posted by Random Deinonychus at 11:25 AM