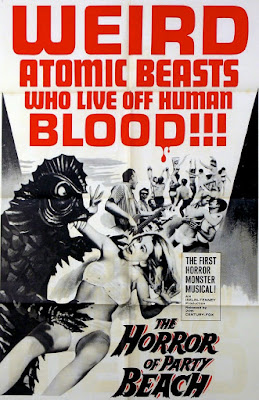 Somehow I had managed to make it all the way to 2018 without seeing this film, despite knowing it very well by reputation. So when the fine folks at Severin Films put it out on Blu-ray this year, I was delighted to finally get to see it in the highest possible quality.

And this is a film that truly rewards HD viewing, because we are talking about a film that contains some of the goofiest monsters ever put on film. So goofy, in fact, that upon seeing them in motion my wife immediately declared them to be her children and that she loves them.

It's hard to blame her for that reaction. I mean, look at this goofball!

We're getting ahead of ourselves, however. After all, this is not just a monster movie--this is a beach party movie that gets crashed by monsters.

Beach party movies were all the rage in the early to mid-sixties, so it was only logical that a few ingenious filmmakers would think to get in on the craze by adding monsters. Nowadays, I suppose the equivalent would be if one of those Step Up dance movies got crashed by flesh-eating monsters, but I think as of this writing the zeitgeist that would allow for that to happen has sadly passed.

One can dream, however.

Since this is a beach party movie, we obviously have to start with a beach party. In this case, we have The Del-Aires playing at a beachfront happening. We actually start off with some of the people on their way to the party, however. Specifically a couple in a convertible who just barely win a half-hearted drag race with a motorcycle gang.

The couple are Tina (Marilyn Clarke) and Hank (John Scott), and Hank is annoyed because Tina has been drinking and is too flirtatious with other men. Tina argues that he used to be fun, while he gripes right back that he's grown up and wants her to, too. Naturally, while the audience is expected to identify with Hank, he just seems like a controlling jerk to a modern viewer and Tina seems like she's more sympathetic--even if she is a bit abrasive.

So Tina immediately joins in the dancing, while Hank seems to just go and sulk and watch the ocean. Hank naturally can't tell from where he's standing, but he's actually watching a boat hauling barrels marked "Radioactive Waste" out into the harbor and dumping them overboard. We see one barrel sink and upon hitting the ocean floor it immediately springs a leak.

The goop that flows out of it flows over to a nearby shipwreck and covers a human skeleton lying on the deck. In a genuinely effective sequence set to excellent creepy music--and really, the whole score is great--we see the skeleton change and take form as a completely new creature. Of course, the effect is somewhat ruined when the creature it ends up as is so goofy, and the ping-pong eyes rolling around in their sockets via some awkward stop-motion does not help.

On shore, Hank is approached by Elaine (Alice Lyon), who is obviously the "good girl" that Hank is supposed to be with. They talk for a while, mainly about her father's scientific work at the university, and then Hank realizes Tina is dancing extra sexily with Mike (Agustin Mayor), the leader of the motorcycle gang. Hank tries to drag Tina off so they can go home, but Mike sees that as the start of a fight and he attacks Hank.

It's a truly surreal fight, too, since at one point the motorcycle gang grabs Mike and uses him as a human battering ram against Hank! Elaine is horrified at the violence while Tina is practically orgasmic at two men fighting over her. However, when the fight ends Mike shakes Hank's hand and then neither of them seem at all interested in Tina after that.

Tina responds by swimming off to an outcrop of rock in a huff, which turns out to be a mistake. The gill man we saw come to life earlier sneaks up on Tina. Meanwhile, the sounds of "The Zombie Stomp" drown out her screams as she is bloodily mauled by the beast.

Side note, "The Zombie Stomp" is the kind of song that tells you how to do the dance in the song and I swear none of the dancers are listening to the instructions.

Poor Tina's mangled body washes ashore within minutes and that puts an end to the party right quick. Amazingly, when we see Lt. Wells (Damon Kebroyd) discussing the murder with other police, the possibility of sea monsters comes up almost immediately and will be the only time the idea is dismissed in any way.

Indeed, when they discuss the case with Dr. Gavin (Allan Laurel, and yes it is always weird to see my first name as someone's surname, whether real or fictional) outside his house, he seems to already be leaning towards some kind of unknown sea creature as the culprit. His extremely stereotyped black housekeeper, Eulabelle (Eulabelle Moore), believes the culprits to be zombies and she is naturally much closer to the truth of it than anyone else.

Hell, if everyone listened to Eulabelle a lot more folks would have made it to the end credits. We'll get to that, though.

Following Tina's funeral, Elaine confesses to her father that she feels really conflicted because she has feelings for Hank but it would be pretty ghoulish to put the moves on him when Tina isn't even cold. She also isn't feeling up to going to the slumber party that is planned for that evening at another young woman's house. Dr. Gavin convinces her to at least be polite enough to call and let them know, which she does.

Of course, it's a bit of a moot point, because Elaine has barely hung up with the girls at the slumber party when it's crashed by a gang of the fish monsters. It's a bloody attack, too, with lots of chocolate syrup being splashed around and even some close-ups of fingers being fed into the mouths of some of the monsters before a couple of the girls are carried off by the creatures. Presumably they will be eaten later.

Now, you may note I said we see limbs being shoved into the mouths of the monsters when the monster suits for this film famously have mouths that appear to be made of hot dogs. Well, that's because there are actually two distinct sets of monster suits in this film and the slumber party massacre is mainly carried out by the less infamous monster suits. These look more like some kind of lumpy humanoid sponges with gaping mouths and they're definitely creepier, but far less memorable.

At any rate, someone apparently survived the attack--despite us not seeing any survivors--and now there is no doubt that there are sea monsters on the loose in the town. A very low-level panic sets in among the citizens, but not so much so that the creatures won't still have several more victims in the next few days.

To be fair, the car of three women who get a flat tire near the local quarry are from out of town, but even they already knew about the monsters killing people. Doesn't save any of them from becoming fish zombie food, though.

The two women walking home at night, though, are just lucky their ride comes along after all. The poor clumsy fish monster that missed eating them instead tries to eat the mannequins it sees in a storefront window and succeeds in cutting its arm off below the elbow.

Dr. Gavin is studying the arm with the police, and revealing how little the filmmakers understand marine biology, when they get a false scare from Eulabelle coming home. Poor Eulabelle has not been briefed on their being a goddamn zombie arm on the table in Dr. Gavin's lab, and when she recoils she knocks a beaker of liquid over onto it. The arm spectacularly goes up in flames, and Gavin excitedly tells her she has found a way to kill the monsters.

What was in that beaker? Why, Sodium of course! Yes, Sodium the metal that reacts violently with water. No, I have no idea why it was a liquid.

The important thing is that now the heroes have a way to kill the monsters. Except they are about to take their sweet time in actually setting a plan in motion, which means there are going to be a lot more dead people before all is said and done...

There is a lot to take in with this film. For one thing, the changes in tone are likely to give you whiplash. Consider that this is a film full of a corny, light-hearted jokes that suddenly veers into graphic, bloody violence that was genuinely extreme for the period.

Honestly, it might be so jarring if the monsters doing all this carnage weren't so incredibly goofy-looking. That's part of the charm, of course.

There is also no way around the fact that poor Eulabelle is a racist stereotype. However, modern viewers can at least take some comfort in the fact that the only time anything gets done in the film to stop the monsters, it is literally because Eulabelle made it happen. Sure, spilling sodium on the monster arm was an accident, but if she didn't chew Hank out for sitting on his butt instead of driving to New York to get the sodium they need, Elaine would have ended up as monster chow instead of the film culminating in a big monster destroying climax. Eulabelle is the film's true hero.

People of color watching this film can also take comfort in the fact that its overwhelming whiteness means all the monster victims are dumb white folks.

Coming back to the tone issues, there's no question that at times the humorous beach party antics are likely to grate on the nerves. Luckily, the film mostly abandons this in favor of the "horror" part of the title after Tina's death and the film does a much better job of fulfilling that part of the title. As easy as it is to laugh at many of its monster scenes, there are some genuinely effective sequences in this.

The score, for one thing, is often very unnerving and the black and white photography lends itself to some wonderfully atmospheric shots.

This is the kind of film that I love being able to recommend in two ways. On the one hand, it's great riffing fodder--and of course it has appeared on Mystery Science Theater 3000. On the other hand, this is a film that I think is genuinely worth watching just as a film. No matter how you watch it, you are going to have a great time with it.

And Severin Films, as they so often do, have done an amazing job with the new Blu-ray. I highly recommend watching it that way if you can get your claws on it.

This has concluded Day 8 of HubrisWeen 2018! To see what the other Celluloid Zeroes chose for H, click the banner above!
Posted by Random Deinonychus at 4:00 AM