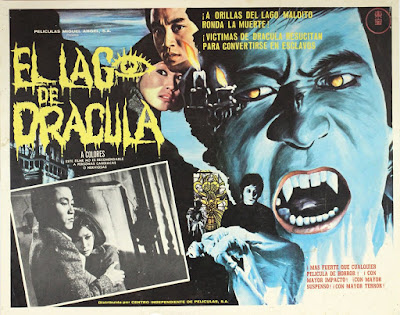 As I mentioned in my review of Evil of Dracula, the requirements of doing these reviews in alphabetical order means we are doing this trilogy in reverse. However, the fact these three films have no connecting continuity means that it's perfectly fine to watch or review in any order at all.

Indeed, it might even be best to watch in reverse order because no matter how you watch them, it must be said that today's film is the weakest of the three. Mind you, when I say that I do not mean that it is a bad film just because it is the "worst" of the trilogy. In fact, it's still one of the better vampire films of this period--and as a vampire film in the early 1970s, it has some serious competition.

We open with a prologue that will turn out to be a recurring nightmare of our heroine. As a child, Akiko Kashiwagi (Michiyo Yamazoe) chases her cocker spaniel, Leo, when he runs away on the beach and disappears into a cave. The cave leads to a European-style mansion and Leo runs inside. Akiko is confronted by a creepy old man (Hideji Otaki) and dodges him to run inside.

Unfortunately, inside Akiko finds a pale woman (Fusako Tachibana) hunched over a piano, and the woman turns out to be dead when Akiko tries to ask if she has seen Leo. Worse, suddenly a pale man with inhuman eyes looms up in front of Akiko and snarls, revealing he is a vampire (Shin Kishida, who will go on to play almost the same role in Evil of Dracula).

As a grown woman, Akiko (now played by Midori Fujita), is a school teacher but is still haunted by her recurring nightmare even though she has suppressed much of it. Even so, the nightmare is so constantly on her mind that she is compelled to paint it over and over, mainly in the form of a single yellow eye looming over a lake.

We join her on holiday by a lake, with her German shepherd, which she has also named Leo. That happens to jog some of the memories of her nightmare when Leo strangely runs off on her as she is talking to the operator of the lake's boathouse, Kyusaku (Kaku Takashina). She has a flash of the other Leo running away, but is jogged back to reality when a package truck pulls up.

The driver of the truck is very odd and insistent that he has a package for Kyusaku, even though there are no papers and Kyusaku did not order anything. The package is also a huge wooden crate, and when Kyusaku opens it in the boathouse--he finds that it contains a coffin. Night falls while Kyusaku tries to get answers from the shipping company, sure that it was delivered as a sick joke.

So when Kyusaku opens the coffin, it is full dark. He is slightly relieved to find it empty, but then he notices what looks like a blood stain. As he goes to investigate it, a pale hand grabs him by the shoulder--and he finds himself face to face with The Vampire from Akiko's dream.

Akiko, meanwhile, is having dinner with her little sister, Natsuko (Sanae Emi), and her doctor boyfriend, Dr. Takashi Saeki (Choei Takahashi). Natsuko is both a loving and very obnoxious little sister. On the one hand she teases Takashi about when he's going to marry Akiko, but she also playfully threatens to steal him away from Akiko if her sister doesn't stop obsessing over her childhood nightmares.

Leaving the nightmare behind is actually getting harder for Akiko, because she is beginning to find more and more things that trigger flashbacks to aspects of the nightmare.

The next day, Akiko and Natsuko go into town and make plans to have dinner with Takashi that evening at a local steakhouse--but Takashi has to cancel those same plans almost immediately due to an emergency. That emergency? A young woman (Mika Katsuragi) who was found on the local road with severe blood loss, despite having no obvious injuries--but then Takashi notices two puncture wounds on the girl's neck.

That evening, to her horror, Akiko can't find Leo. She and Natsuko go searching the woods, but they get separated and then Akiko finds Leo's dead body. (Don't worry about how real the "corpse" is, since if you look closely you can see Leo is breathing) And then she is attacked by Kyusaku, who seems to have gone mad.

Akiko comes to in the boathouse, in a trance, having been presented to The Vampire by Kyusaku. Whatever the fiend has planned for her is interrupted when headlights shine in the window and two anglers arrive, looking to rent a boat. Akiko breaks out of her trance, but the anglers can't find any evidence of the men she mentions as having tried to assault her.

She goes home, but now Natsuko is missing. However, she appears as soon as Natsuko calls Takashi to tell him. However, Natsuko is acting very odd and even dismisses Akiko telling her that she thinks Kyusaku tried to rape her.

Later that night, though, Natsuko wanders off into the woods to meet The Vampire. As his eyes glow, she offers him her neck and he happily drinks her blood...

There is a lot happening in Lake of Dracula. It would be easy enough for the rest of the film to be about Akiko being gaslit by those closest to her, in service of The Vampire. However, that is only part of what the film is about. Hell, we don't even really find out the backstory of The Vampire until maybe 10 minutes from the very end of the film.

Before we get there, we do have vampire gaslighting, atmosphere galore, and a sequence that truly blows me away: two men having a vigorous and well-choreographed fight inside of a medium-sized sedan! I'm not kidding, it's an amazing fight.

And naturally, we get a nicely gruesome end for our evil vampire.

There is, strangely, a feeling that something is missing, however. Part of the problem is that some of the pacing is a bit off, which undercuts the sense of urgency that should be building instead of abating. Then there is the fact that Akiko is too passive in her own story.

As a result, it doesn't all gel together in the way that it really should. It's a shame because there is so much to love, yet it could have been better.

That said, this is still a very good movie. If you love Hammer-style vampire films and want something that scratches that itch while also taking it to a more unique setting, then you should absolutely watch this.

This has concluded Day 12 of HubrisWeen 2018! To see what the other Celluloid Zeroes chose for L, click the banner above!
Posted by Random Deinonychus at 4:00 AM