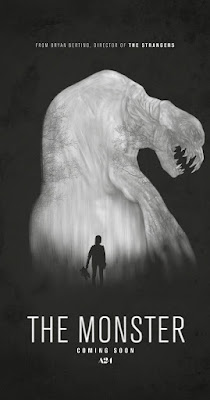 Nothing helps you to confront your metaphorical monsters quite like confronting a real one. I mean, you'd think being almost eaten by a toothy whats-it would be more likely to making you bury yourself even further into self-destructive tendencies, but just you never mind.

And, boy, nothing livens up an awkward road trip with an estranged family member quite like an encounter with a man-eating bat-gorilla-lizard.

Of course, it's hard to anticipate an encounter with such a creature, so 10-year-old Lizzy (Ella Ballentine) is currently more focused on being annoyed at once again playing parent. She cleans up the filthy house full of empty beer bottles, trying to shut out the sound of the alarm that's been snoozed for over an hour. Finally she wakes up her hungover mother, Kathy (Zoe Kazan), who is naturally less than grateful.

Still, late as they are, they do eventually get on the road to Lizzy's father's house. Kathy may be a drunk, but she isn't dumb. When they stop briefly so she can smoke a cigarette outside of the car, she gives Lizzy her grandmother's watch. Lizzy is confused but Kathy explains that she knows Lizzy isn't going to come back this time.

Of course it's a long drive to where they're going and an unexpected bit of construction forces them onto a side road. Just then one of the tires blows out and Kathy loses control of the car, which hydroplanes right into a wolf that had stepped out in front of the car. While they're both shaken up something awful, their only real injuries seem to be Kathy's sprained wrist and a cut on her forehead. The driver's side door is bent inward, so they have to climb out of the passenger door to assess the damage.

Lizzy can't shake an eerie feeling that something isn't right. That's not helped by Kathy discovering that the dead wolf has a huge tooth lodged in its side. Luckily, Kathy has her cell phone and they are able to call for a tow truck and an ambulance. The tow truck arrives first, driven by a man who introduces himself as Jesse (Aaron Douglas).

However, Lizzy notices that the wolf has mysteriously disappeared. Jesse loads their bags into his truck, but he discovers that the car has a broken axle he'll need to fix before he can tow them. He advises them to stay put, but when Kathy realizes her cell phone was in one of the bags she sends Lizzy out to get it.

Since the bags are locked in the truck, she'll have to wait for Jesse to finish up before she can get them. In the meantime she follows the bloodstains on the road into the woods at the edge of the pavement. The wolf carcass is there and something has clearly been eating it. Unbeknownst to Lizzy, that something is standing right behind her, just out of focus.

Lizzy goes back to the car to tell her mother what she found, but a half-eaten wolf seems like small potatoes when they realize Jesse isn't under the car any longer. However, he soon returns--well, part of him returns. His severed arm lands on the hood of the car and the shaken mother and daughter huddle together inside their car.

Unfortunately, it isn't long before they find themselves in the awful position of being helpless to do anything but watch when the mauled Jesse crawls back out of the woods to his truck, and the monster looms up behind him...

As plots go, The Monster seems as simple as its title. However, the film takes a lot of time to truly set up the relationship between Lizzy and Kathy via flashbacks--and it is harrowing stuff.

Even as someone with a relatively positive relationship with my parents growing up, I recognize a lot of truth in the shouting matches between mother and daughter. However, Kathy is by no means a positive maternal figure. There's no question that the two love each other more than they are able to outwardly admit now, after too many disappointments, heated arguments, and verbally abusive boyfriends.

However, one of the most chilling moments in a film full of them is seeing a time when Lizzy held a knife to her unconscious mother's throat, whispering how much she hates her and wants her gone. It's even worse that we know that that moment of pure animal hatred didn't come from nowhere.

That's not to say that the film lets Kathy off the hook. She was clearly an abusive mother who let her own demons ruin her child's life rather than seeking help. Lizzy is never made to forgive her mother for being a bad parent, either. It's also a nice touch that, even though we never meet Lizzy's father, the film doesn't try to give us the impression that he was any kind of saint. One of the few glimpses of his character we get is when we hear Lizzy's side of a phone call with him, and she clearly cuts him off from trying to blame the accident on Kathy being drunk.

It's a simple line, but it rather nicely insinuates that just because he's the "better parent," doesn't mean he's above petty swipes at his ex.

The characters are great and the acting is even better. I've seen Zoe Kazan in more than a few things, so I knew she had great chops but Ella Ballentine is amazing as Lizzy. A bad child actor can really sink a project like this, particularly since so much of the film's perspective belongs to her, but she is more than up to the task.

Speaking of characters, our title character is a real standout. The film wisely never gives us too good a look at it, but it's a great man-in-a-suit beast that once again shows that sometimes old school effects are the way to go. It's a great design, very simple yet ferocious and frightening. It also nicely strides the line between "utterly alien" and "could have started as a real animal" that this sort of unexplained menace really needs to be truly effective.

Though I was a tiny bit disappointed that nothing comes of the fact that the creature either has wings or a flying squirrel-style flap of skin between its front and back legs. Unless we're to infer it dropped a couple of its victims onto vehicles whilst flying, that is.

Bottom line, this film is excellent and you should see it at once. If you have Amazon Prime, it's streaming there as of this writing, but I genuinely feel that if you were to just go out and buy the disc based on my recommendation you would not regret it in the slightest. If this hadn't gotten such a small release when it first came out, it would already be destined for minor classic status and I genuinely believe it deserves to be treated as such.

It's always nice to get to watch a genuinely great movie for Hubrisween now and again.

Welcome to Day Thirteen of Hubri5Ween 2017, the fifth year of this nonsense! Click the banner above to see what everyone else did for M!
Posted by Random Deinonychus at 6:00 AM