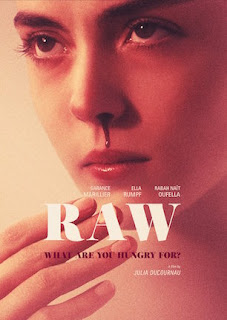 Even in this day and age, there is a weird assumption that women are more squeamish than men. Perhaps it's playground taunts that we never outgrew, or a need for men to somehow prove we are better at something at all times. Like all sexist generalizations, it naturally forgets that women (and men, for that matter) are not a hive mind.

Case in point, the French-Belgian film Raw, which is one of the most brutal and disgusting horror films I've seen in a while. It's also one of far too few I've seen directed by a woman, and unsurprisingly it gets a lot of its power by building on horrors that women can uniquely relate to.

Not in the way you might necessarily think, either.

Justine (Garance Marillier) has been a vegetarian all her life, though not solely by her choice. In fact, we see quite plainly that it's a diet strictly enforced by her overbearing mother (Joana Preiss) and her only slightly less strict father (Laurent Lucas), when they stop to eat at a cafeteria. When Justine finds a single meatball in her mashed potatoes, her mother goes ballistic on the poor server.

Justine's parents are driving her to her first day of veterinary school, which seems to be something of a tradition in the family. Not only did her parents go, but her slightly estranged older sister Alexia (Ella Rumpf) is currently attending the school.

The first day goes awkwardly, as the hazing sets in before Justine even has time to process the odd fact that she has been given a gay male roommate named Adrien (Rabah Naït Oufella) instead of the female roommate she requested. And the hazing at this school is extreme, to say the least. Like, "These upperclassmen sure loved the end of Carrie" extreme.

Worse, they make all the rookies eat raw rabbit kidneys. Justine objects that her family are vegetarian, but Alexia oddly claims that isn't the case when Justine asks her to back that fact up. So Justine gets to eat a raw bit of rabbit, and we're off to the races.

First, Justine gets a rash all over her body that won't stop itching. The nurse chalks it up to a food allergy and gives her some cream to help with it. However, Justine finds herself oddly starving and nauseated all at once, with bizarre cravings for meat so powerful she tries to steal a hamburger patty from the school cafeteria and takes a voracious bite of a raw chicken breast Adrien had in their fridge.

She also finds herself struggling in her classes. After her professor accuses her and Adrien of cheating off of each other, she finds herself in the bathroom and...

...look, I generally think of myself as pretty strong-stomached when it comes to horror movies. However, I am not exaggerating when I say I came close to vomiting at this point. Justine had been her gnawing on her hair while talking to the professor, and now she proceeds to pull handfuls of it out of her mouth and throat.

It's one of the most disgusting things I have ever seen, like seeing someone clean the hair out of a shower drain with their hands: except the drain is their mouth.

Feeling even more of an outsider than she had previously, Justine tries to spend more time with her sister. However, after a night of fun Justine notices her sister has the same topical ointment in her medicine cabinet that she has been using, and then Alexia notices her little sister has hairy armpits.

Alexia suggests it is high time that Justine get a "Brazilian" and, being a good sister, decides to do it for her. Let me tell you, the Saw franchise could learn something from this torture sequence.

Worst of all, the wax gets stuck and Alexia gets a pair of very sharp scissors to cut it loose. Understandably, Justine freaks out at the thought of those being so close to her genitals and reflexively kicks her sister away.

Unfortunately, this causes her sister to cut her own finger off with the scissors. Alexia passes out and Justine calls for an ambulance, but can't find any ice to put the severed finger on. It gets so much worse, however, because suddenly that meat craving hits Justine again and before she can really stop herself she is gleefully chewing the flesh off the severed digit.

So you can imagine an awkward conversation is in store when Alexia comes to, and sees her sister eating her finger.

Oh, but it's so much more awkward than that. Alexia covers for her sister by claiming her dog ate the finger, even though this means the dog will be put down for it. However, she demands that Justine talk with her by the roadside as they walk home from the hospital.

Whatever Justine is expecting, it can't be for her sister to suddenly run out in front of a car to make it crash into a tree--and then take a bite out of the dead passenger.

Yep, whatever made Justine turn into a cannibal got to her sister first, and Alexia is trying to show her how to deal with it. Unfortunately, Justine and Alexia have different ideas about how to handle their strange cravings and sibling rivalry becomes a lot more intense when it's between two wannabe wendigos.

There's naturally a lot to unpack in Raw. It's been referred to as a feminist horror film, and it would not be incorrect to look at it from that perspective.

Like many women-helmed horror films, this plays on fears and experiences that are primarily experienced by women. Not especially subtly, either, since the parallels between adult onset cannibalism and a struggle with eating disorders are made blindingly clear in several scenes--like after Justine's hairball incident when another student in the bathroom tries to advise her of a faster way to purge.

There's also, as you'd expect, a sexual undercurrent to Justine's struggle. She begins to embrace her own sexual being after she begins to transform into a cannibal, but she also is too violent with a few possible suitors (who frankly deserved it), and a video of her drunkenly snapping at a cadaver is played like a sexual violation gone viral. There's also the confusion that happens when she discovers she wants Adrien both as a meal and as a sexual partner.

That isn't helped by Adrien becoming her first sexual partner in a moment of weakness for both of them. That's a slightly thornier issue that I can't fully wrap my head around, since Adrien is explicitly shown to be gay and not bisexual. In fact, he angrily shouts at her in a classroom later when she keeps pushing him to talk about the encounter because of the frustration of finally being able to be out after 20 years, only to find himself having sex with a woman.

It's a character arc that manages to almost make sense, but also rings a bit false for me.

Speaking of sexuality, this film does have a lot of female nudity in it, but I'm always pleased to see what it looks like when such scenes are filmed from a perspective that is almost totally divorced of "the male gaze." Even a male director can shoot naked women in a manner divorced of titillation, of course, but it's a lot less frequent. It almost never looks like this film's nude scenes, which simply remind us that, hey, humans are naked under their clothes.

I have seen many movies that decided the story absolutely called for two women to take a shower together, but never have I seen one that pulled such a scene off without any sense of exploitation the way this one does.

If you have a strong stomach, then I definitely recommend Raw. In terms of story, it must be said that it's pretty slim, but sometimes that's perfect enough. I'll be damned if I wasn't riveted almost immediately and thoroughly enjoyed it even when I was recoiling in horror and disgust.

Just, seriously, don't watch it while you're eating.

Welcome to the Day Eighteen of Hubri5Ween 2017, the fifth year of this nonsense! Click the banner above to see what everyone else did for R!
Posted by Random Deinonychus at 6:00 AM