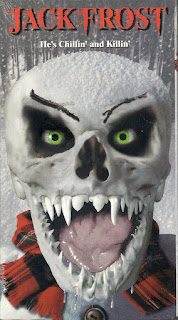 Back in the late 90s, if you were a B-Movie Fan you might remember what is easily the funniest case of two movies with the same title and a very premise coming out within a short time of each other. Even though they were produced utterly independently of each other, the world saw the release of two movies about someone dying and coming back as a snowman, both named Jack Frost.

Even more hilariously, one movie was a cheap horror comedy about a serial killer coming back as a snowman to exact his revenge, and the other was a big studio family movie starring Michael Keaton as a man who comes back as a snowman to be with his son. Though, of course, the living snowman in Keaton's version managed to look far creepier.

Both films lack much of any positive reputation, of course, so in theory you could say they both have that going for them, too. However, I tended to find myself in a bit of a disagreement with the popular opinion on this one, because I happened to love Jack Frost.

The killer snowman one, obviously.

Luckily for me, the fine folks at Vinegar Syndrome may not have necessarily agreed with my love of the film, but they still felt it deserved an excellent Blu-ray release and so I was able to revisit a film I had loved in my teenage years. And in glorious HD!

Of course, this is always an iffy proposition as a film you loved at 14 is often going to be a painful rewatch at almost 34. I mean, that's nearly 20 years of maturity there and...oh, who am I kidding? My tastes haven't matured that much.

The film begins with a genuinely clever bit of exposition delivery. As the camera pans over some Christmas ornaments with the credits written on them, an offscreen Uncle tells his young niece a "happy, scary story" at her request. This turns out to be the story of Jack Frost, the way he killed people and how he eventually slipped up and was caught, and is on his way to be executed this very night.

Well, we all know that isn't going to go well.

Indeed, in the back of the prison van transporting him to his final destination in the midst of a blizzard, Jack Frost (Scott MacDonald), has already managed to kill one of the guards. Whatever plans he had for escape are quickly aided by the van getting into a head-on collision with a tanker truck for a genetics corporation. Said plans are also immediately crushed by the same accident, because heat from the burning truck causes the tank to explode and Jack is doused in a strange acid that quickly melts him into goop.

Said goop, however, disappears into the snow and--via some CGI animation that wasn't even good at the time--we see his cells merge with the ice and snow. The only guard to survive of the crash shoots at the writhing snow as it bellows with Jack's voice...

Meanwhile, the man who caught Jack Frost through sheer dumb luck, Sheriff Sam Tiler (Christopher Allport), is driving home with his wife Anne (Eileen Seeley) and young son Ryan (Zack Eginton, who is clearly not as young as the filmmakers intended him to be). They pass by the scene of the accident, not realizing its significance. Naturally nobody believes the story the crash's lone survivor tells, except Agent Manners (Stephen Mendel) and his twitchy compatriot Agent Stone (Rob LaBelle).

And of course they would believe him--they actually work for the company that acid belonged to, and they know what it was meant to do.

It isn't long before strange deaths start happening in Sam's town, and he begins to wonder if maybe Jack Frost didn't die in the crash as the news claimed. It especially hits home when the local teenage bully is beheaded in Sam's front yard by a sled (it's just as silly as it sounds), after taunting Ryan in front of a mysterious snowman the younger kid was decorating.

Of course, it gets even worse when the same snowman pays a visit to the bully's parents. The father gets his own axe shoved right down his throat, and the mother has her face bashed into a box of glass ornaments before being strung up on her own Christmas tree. Sam is baffled and while Manners and Stone "from the FBI" show up to look at the murder scene, they're keeping mum about what they know.

Though, really, all they actually know is that the killer is something able to alter its molecular structure. In other words, it can melt into water and then refreeze into ice and snow, at will. The local hardware store owner, Paul Davrow (F. William Parker), knows what's going on, however. He was making a delivery of salt to the house when he saw the killer gloating over his bloody Christmas tree. Of course, he just appears to have lost his mind when he's found smashing all the snowmen built for the town's annual contest while screaming, "Fucker's a snowman!"

Said snowman is able to finish the job on the bully's family in the meantime. The bully's older sister, Jill (Shannon Elizabeth in her film debut, though she was originally credited as "Shannon Elizabeth Fadal" and it seems the credits were later altered after she became famous) decides to convince her boyfriend, Tommy Davrow (Darren O. Campbell), that they should sneak into the sheriff's house to have sex.

No, I don't have any clue why she wants to do this. Let's just say it's because she gets off on breaking and entering.

Well, after the two strip down to their long underwear to "The 12 Days Of Christmas", Jill retires upstairs to dry her hair and tells Tommy to get her some wine and draw her a bath. (No, I don't know why she dried her hair before a bath) Alas, poor Tommy makes the acquaintance of "the world's most pissed off snow-cone" and gets an icicle shot through his skull. And then Jill discovers that the water in her bathtub is actually Jack Frost, who then...rapes her to death, seemingly by bashing her head against the wall too many times.

Yes, this is played for laughs.
This is definitely the most indefensible part of the film, made even worse by the fact that you might notice Jack's carrot nose is missing. According to the director, the carrot was supposed to be in place but in the first take poor Shannon Elizabeth got poked in the face by it and they removed it for safety reasons. It was only later that they realized the implications...and then ran with it by showing Jack putting his nose back on afterward.

It says something about where we are as a culture that in 1997 this joke was made most likely without any thought that playing a murder-by-rape as a joke is incredibly fucked up--but if the same joke were done in the movie today, it would have been done specifically to "trigger snowflakes." Both motives are obviously fucked up, but I suppose it's progress that by 2017 only actual shitlords would be unable to realize how wrong it is.

At any rate, Jack very shortly reveals himself to Sam, Manners, and Stone. Bullets don't hurt him and blowing up the sheriff station with him inside it only temporarily inconveniences him. However, he definitely showed an aversion to hairdryers in the sheriff station, so Sam guides the townspeople to use hairdryers to force Jack back into the furnace of the town's meeting hall.

That works, since it turns Jack into steam. However, what happens when steam hits a cold window, class? Sure enough, Jack returns to his liquid state and then quickly to his solid state. Jack uses icicle teeth to chew Manners's face off and then uses Stone as a host body to try and get out of the hall unnoticed. However, when he confronts Sam and Ryan, Sam makes the discovery that the disgusting-looking oatmeal his son made him earlier in the film burns Jack.

It turns out that Ryan, wanting his father to stay warm, put anti-freeze in the oatmeal. Again, I think this shows that Ryan was meant to be much younger than the actor playing him and also, holy shit if Sam had actually eaten that his son would have killed him.

However, I'm sure Sam will come to that conclusion in time and have a serious talk with his son. For now, however, he finally knows what Jack Frost's weakness is...

It's not hard to see why many folks think Jack Frost is awful. Even aside from the rape of Shannon Elizabeth's character being played as a joke, horror comedy is a tricky subgenre to get right. A film that has a killer snowman as its monster must already seem to be trying too hard for most folks.

There's also little question that this is a very low-budget film, and when a film shows its budget as clearly as this one it tends to meet with an extra layer of scorn.

One of the more amusing stories about this film's production is that, despite multiple mentions of dangerous snowstorms and blizzards, the area where it was filmed was experiencing an unexpected snow drought. Therefore, despite a game attempt by the film to bring in some fake snow, it's hilariously obvious that the town has nary a flake on the ground in most scenes. Frankly, this rather endeared me to the film for doing its damnedest to make do.

As for the horror comedy aspects, well, humor is subjective. If you're not game for a lot of very bad snow and Christmas pun one-liners, you're going to find this film to be torture. Personally, I find it rather charming. I mean, come on, this film's soundtrack is largely hard rock covers of Christmas carols!

Most importantly, the film seems to understand--in most scenes--that its premise needs to be played straight in order to be funniest. It definitely goes in for the broad comedy where it can, but otherwise it strives to hit all the same beats you'd expect it to go for if it was a serious horror movie.

It's definitely true that this film is very much not for everyone, and might even be better classified as "not for most people." However, even twenty years later I still find myself a little bit in love with it.

Welcome to Day Ten of Hubri5Ween 2017, the fifth year of this nonsense! Click the banner above to see what everyone else did for J!
Posted by Random Deinonychus at 6:00 AM