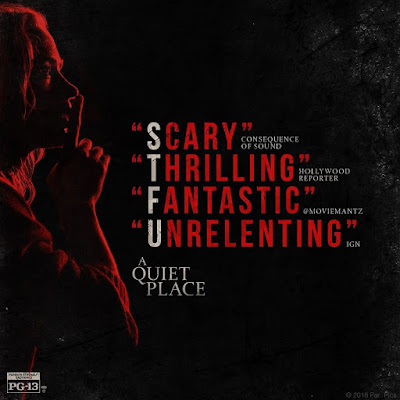 What makes A Quiet Place somewhat unusual is that there were very few detractors for the film itself--though we will address that to some extent later on--but I don't think I know of a single person who saw this film in theaters and didn't have a wretched experience.

Take my own experience. I went to see it by myself and sat on the end of a side aisle because the theater was already crowded when I got there on a Tuesday evening--this being a theater with cheaper admission on Tuesdays. Maybe 15 minutes into the film, a couple and their child squeezed past me to sit in the row next to me. We've all misjudged the start time of a show before, so I don't begrudge them that.

However, the male half of this couple kept leaning over to me to ask what they missed, despite my responses being brief because I was trying to watch the film itself. Then he continued to loudly talk with his partner about the fact that he was confused as to whether the entire family the film focuses on is deaf or not, despite context clues. And then they squeezed past me at least two more times.

Essentially, the cheeky poster above was directly precisely at them.

Thankfully, the miserable experience did not detract from my enjoyment of the film. That said, the film also has some issues that I will be touching on, though I can't blame too many of them on the film itself.

It's been only a matter of months since a catastrophe befell America, if not the entire world. We get only hints here and there, from scraps of newspapers and such, but an alien species has appeared that devours any living creature they can find. The only saving grace is that these predators are blind and they hunt entirely by sound, but by the time that was figured out the town the Abbott family lives in had already been almost entirely devoured.

Luckily for the Abbott family, their eldest daughter Regan (Millicent Simmonds) is deaf, so they had already all learned American Sign Language. This means that the parents, Evelyn and Lee (Emily Blunt and John Krasinski, who are both a couple and parents in real life), have a safe means of talking to both Regan and their sons, Marcus (Noah Jupe) and Beau (Cade Woodward). They have also found a way to mark the quietest routes in and out of town.

However, even a tiny mistake in this new world can be deadly. When we join the family as they raid a local grocery store for supplies, Beau has found a toy spaceship that makes lights and sounds. Being a four year old, he wants to take it home to play with, but Lee stops him because it would be too loud and takes the batteries out of the toy just to be safe. Regan, trying to be kind to her sibling, gives him back the toy ship without the batteries.

Except she didn't realize Beau grabbed the batteries, too. Beau ends up taking up the rear as the family heads home, and then he turns on the spaceship. Evelyn is carrying Marcus, Regan can't hear the noise behind her, and Lee is too far away. Despite Lee's best efforts, the monster that charges out of the forest gets to Beau first.

A year later, the family has further cemented their routine and Evelyn is even pregnant with another child. Still, the scars of the day they lost Beau still sting. Marcus is terrified of leaving the safety of their farm and Regan blames herself for her brother's death, and has convinced herself that her father blames her, too.

It might help her feel less blamed if Lee wasn't so obsessed with fixing her cochlear implant. Sure, he just wants her to be able to hear--especially since that can really make a difference when you have to be aware of every sound to survive--but it sure feels like he's trying to "fix" her to keep another incident like Beau's death from happening.

Lee does at least split the rest of his time between trying to radio the outside world, cataloging information on the creatures to try and find a weakness, and building a soundproof secret room in their barn to keep the baby in once it's born.

Except, of course, babies don't ever keep to a proper schedule, do they? And wouldn't you know it, the baby chooses to come when Evelyn is in the house alone. Well, alone except for one of the hungry creatures...

When I first saw the trailer for A Quiet Place, my thought was that someone decided to do a version of It Comes At Night that actually contains an "It." After I saw the film I discovered that that was actually a pretty fair assessment.

I would also say that, when comparing the two, A Quiet Place comes out on top at the very least because there actually are monsters in it. Both films also have some sadly unusual forms of representation--It Comes At Night has a biracial family at the core and while the family at the center of it is still super white, A Quiet Place has an actually deaf actress playing a deaf character. It really adds a lot to the film.

I'll just go ahead and say that A Quiet Place is a great film, but it is not perfect. There is both a lot of really good aspects and some things that really don't work. On the good side, the sound design is beautiful and really reflects what the film is trying to do. The characters are wonderfully sympathetic and the acting is terrific.

There are also some amazing set pieces and suspense scenes, and the film delivers an ending that made me want to cheer in the theater--even if I basically just laughed in appreciation.

On the downside, well, first let me say that not everything that makes it easy to criticize is entirely the fault of the film. We will get to that, but it let's first be fair by addressing what the movie actually does wrong. For starters, the monster design seems really neat when you first get glimpses of them, but when the movie has to give us a good look finally it turns out that we've already seen these monsters before. They look like the Lickers from Resident Evil with a lot of the moving face parts of something like the Shriekers in Tremors 2: Aftershocks.

I don't expect every monster to look original, but they at least shouldn't be boring.

Secondly, the film has the characters make a lot of understandable mistakes, which feels more human than script-motivated. However, it makes them look a bit callous and foolish that they decided to go ahead and bring a baby into the world so shortly after their youngest son was killed. A baby is such a liability and unnecessary risk that you almost begin to believe the claims that this was a pro-life allegory, because those allegories almost always end up being stupid and counterproductive.

Worse, despite setting up the baby's birth as a huge risk for Evelyn, the film clearly doesn't understand how birth works. Her labor is set up and made incredibly tense, but then she somehow delivers the world's quietest newborn in less than an hour. It comes across as cheap.

If you can forgive that, this is definitely a film worth seeing. However, I do need to address something likely to annoy the shit out of any horror fan. And that is the fact that this film has been grouped into what have been termed "elevated horror," both by critics and even the filmmakers themselves.

Even if we are to accept that "elevated horror" is a thing, instead of an attempt to distance yourself from an unfairly maligned genre, this film ain't it. The original Dawn of the Dead or Get Out? Those I can accept being called elevated horror, because they are addressing society through the lens of a horror movie.

I'm really glad that I saw the film before I knew the film had been talked about this way by its creators, because that would have soured me on it for sure. That isn't really fair, however, so I am here to say that this is a very good film and it deserves to be enjoyed. Just accept it for what it is and don't expect it to be "superior" to the genre it belongs to.

This has concluded Day 17 of HubrisWeen 2018! To see what the other Celluloid Zeroes chose for Q, click the banner above!
Posted by Random Deinonychus at 4:00 AM