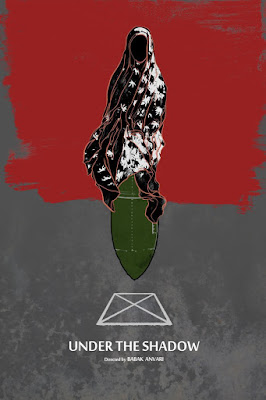 Easily the greatest compliment you can give any horror movie is to say, "It was a really bad idea for me to watch this late at night by myself."

If you've seen enough horror movies, you know the kind of film I'm referring to. The sort that gets you questioning if you heard something that wasn't just your cat eating plastic, makes you swear you saw movement, or leaves you a bit reluctant to look too closely at the shadowy parts of your room. The kind that gets under your skin, both as you watch it and shortly afterwards.

Boy howdy, that describes Under The Shadow to a T.

It doesn't seem that way at first, of course, because this is a perfect case study in the "slow burn" style of horror film. We begin first with a title card explaining that we are in Tehran, Iran during the 1980s and smack-dab in the middle of Iran's war with Iraq. The opening credits roll over a montage of news footage from the period to truly drive home that this was a really rough time to be an Iranian citizen.

Of course, the regular threats of bombings are only one of the things weighing on Shideh's (Narges Rashidi) mind. For what seems like the dozenth time, she has tried to apply to be allowed to resume her studies at a medical school now that the schools have been re-opened to women. However, her involvement in leftist student groups during the cultural revolution means that she is once again rejected.

Returning home to her husband, Iraj (Bobby Naderi), and her daughter, Dorsa (Avin Manshadi) is not exactly well-suited to taking her mind off of things, either. Iraj actually got to complete his medical studies and become a doctor and it's clear that Shideh feels a tiny bit of resentment towards him as a result. So it isn't horribly shocking that Shideh pointing out that the cross tape on the windows (meant to reduce the amount of broken glass in the event of a strike) is starting to peel off quickly morphs into a fight about whether Iraj ever even supported her dreams in the first place.

It gets worse, however, because Iraj has been drafted to go serve as doctor in the field of battle. He tells Shideh to take Dorsa to his mother's home in the country, since there are reports that Iraq has shifted from bombing runs to missiles. However, Shideh refuses--at least partly because she has never felt welcome at his family's home, but mainly because she refuses to give up her home.

However, even before Iraj leaves things start to get strange. Dorsa hears strange noises in the night, which both of her parents assume was merely a dream. Except that Dorsa also tells her that the landlord's nephew, taken in after his parents were killed, has been telling her stories about Djinn. Assuming these stories are responsible for her daughter's night terrors, she asks the landlord's wife to tell the boy not to tell those stories any more.

There's just one problem with that seemingly simple request: the boy is a mute and has been since his parents died.

Dorsa also becomes obsessed with keeping her doll, Kimia, in her possession at all times. This means that when a dreaded missile attack finally occurs, Dorsa is still in the apartment instead of in the basement for safety. She manages to only get a bumped head, but becomes frantic because Kimia is missing. However, their frantic upstairs neighbor barges in to beg Shideh for medical help because her father is hurt--having apparently suffered a heart attack after the unexploded missile crashed into their living room.

Shideh can't save him, unfortunately. But the stranger thing is her neighbor later tells her that her father was fine after the bomb hit, but he saw something that terrified him afterwards. At any rate the neighbor is the first tenant to evacuate the building.

Dorsa comes down with a fever that neither Shideh nor a pediatrician can make sense of. Worse, she becomes convinced that her doll is inside the empty apartment, obsessively trying to get inside. She tells her mother that Djinn stole the doll, which just upsets Shideh all the more.

However, she starts to think maybe there might be something to all this when Iraj suddenly turns up in her bed. When he starts growling abusive comments at her, she realizes he can't possibly be there--and then he attacks her before seemingly vanishing.

Shideh can find no evidence of any actual attacker, so she has no choice but to write that off as a vivid nightmare. However, during a discussion of Djinn with the landlord's wife, Shideh once again scoffs at the idea that Djinn are anything but a fairy tale. However, when she mentions that Dorsa's doll is missing, the older woman gets very disturbed and tells Shideh that if a Djinn steals someone's possession, they can track them anywhere.

And then the human shape in a chador (a form of cloak worn by women, similar to a burqa) begins to appear, even though the building is virtually empty of all other tenants by this time. The chador sure doesn't move like anyone is inside of it--and then Shideh awakens to find a grey old man hovering in her bedroom doorway. When he flees from her, she chases after him: only to see his leg disappearing into a crack in the ceiling that seals up behind him.

Being a parent is rough. People tell you this, sure, but you don't really understand how rough until you are one--especially when it's not really on your terms. It can be very easy to misdirect anger and disappointment at other aspects of your life towards your child.

It's a theme we've seen before in films like The Babadook, but that film dealt with a threat that amplified the innate angers and insecurities inside the parent. Here the threat is entirely external, yet it uses a lot of the same themes to prey upon mother and daughter.

There's also a lot of brilliance in the choice of both the film's setting and the gender of its central protagonists. As a former radical activist and the only woman in her apartment complex who can drive, Shideh already finds herself in the position of an outsider before she ends up being alone in the building with her daughter and the Djinn.

However, Shideh simply can't rely on outside help at all. In one chilling scene, she flees a Djinn attack with her daughter out into the street. In her panic, she forgot to cover herself with a headscarf, and she is stopped by two military police and forced to answer for the crime of indecency to a cleric. The cleric lets her off with a warning, but he still harangues her for putting the physical safety of herself and her child ahead of modesty.

While the Djinn are certainly terrifying, we really have no way of knowing how sinister their motives are. On the other hand, we know exactly how sinister the motives of misogynistic fanatics can be.

Of course, even if you simply look past the social commentary the film deftly balances with its horror, this is a damned fine ghost story. I am actually loath to say much more, lest I spoil it for anybody. So I will leave you with this comment:

I hope I never, ever encounter an apparition under my son's bed that looks like the one that tries to trick Shideh into thinking it's Dorsa. *shudder*

Welcome to Day Twenty-One of Hubri5Ween 2017, the fifth year of this nonsense! Click the banner above to see what everyone else did for U!
Posted by Random Deinonychus at 6:00 AM