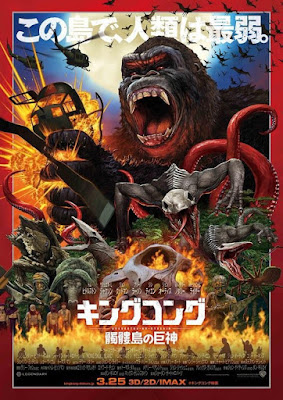 King Kong is definitely one of cinema's most enduring and popular characters, but somehow this is true despite most of his incarnations using him to tell the exact same story. Giant ape encounters blonde woman and carries her around his island fighting off the other denizens of said island, before he is taken back to New York City and ends up taking a fatal dive off of the tallest building.

There are, of course, outliers that try something different. Just look at King Kong vs. Godzilla, King Kong Escapes, or King Kong Lives--but generally the one major Kong story is the one that filmmakers find themselves going with.

So it was a welcome change when today's film was announced as a prequel of sorts to the familiar Kong story. However, things change rapidly in Hollywood and before long the film mutated instead into a prequel to Godzilla (2014) in order to set up the rematch, Godzilla vs. Kong in 2020. As you might imagine, this was quite a shift in the film's original intent.

The clear upside is that it meant that we weren't going to be stuck with yet another remake of the original film. Beyond that, it was tough to know precisely what to expect until the trailers came--and they were pleasantly surprising.

I certainly wouldn't have expected a film where the weird two-legged lizard thing from the original King Kong became the basis for Kong's ultimate nemesis.

But let's not get too far ahead of ourselves.

We open in the Pacific in 1944 in the immediate aftermath of a dogfight that forces both American pilot Hank Marlow (Will Brittain) and Japanese pilot Gunpei Ikaru (pop singer Miyavi) to ditch their planes on a mysterious island. The two decide to continue their battle on foot, but soon find themselves interrupted by the appearance of an enormous ape...

Fast forward to 1973 Washington D.C., as the end of the Vietnam War is announced. We follow Bill Randa (John Goodman) and Houston Brooks (Corey Hawkins), two representatives of the shadowy government agency Monarch as they try to make a plea for official support to explore an island recently discovered via satellite. In this film Monarch is not quite as powerful as it will eventually be in Godzilla, in fact it's in danger of being shut down. After all, nobody actually believes in monsters.

However, pointing out that whatever secrets this unknown island has will surely be exploited by the Russians if Monarch doesn't get there first gets their foot in the door. Soon enough Randa, Brooks, and San Lin (Jing Tian) are hitching a ride with a Landsat mission already set for the same island--along with a military helicopter escort led by Colonel Preston Packard (Samuel L. Jackson). Packard is a career military man who is taking the end of the Vietnam War very hard, so he welcomes one more chance to put himself right in the thick of it.

Of course, Packard isn't super pleased by some of the civilian choices Randa brings aboard. He has no real beef with former SAS Captain turned tracker James Conrad (Tom Hiddelston), but he does bristle at photojournalist Mason Weaver (Brie Larson). In Packard's mind, no-good peaceniks like Weaver lost the war for them.

Luckily, this film learned a lesson from Peter Jackson's bloated remake and once it has established our heroes sufficiently we quickly find ourselves flying through the perpetual storm that walls off Skull Island and the helicopter crew is quickly dropping seismic explosives to map the island. To Brooks and Randa's delight, the island's bedrock is practically hollow, which would seem to back up Randa's hunch that the island is home to monsters.

Unfortunately, his hunch gets proved far sooner than Randa really wanted it to be. Those seismic explosives didn't just disturb the island's population of deer and birds--they angered a gorilla-like creature standing 100 feet tall. And it turns out that the squadron of helicopters is no match for the beast, which quickly destroys every single one of them.

While a lot of Packard's men die, most of them survive and end up scattered across the island in various groups. Packard and Randa's group gets to learn the hard way that the island is home to gargantuan spiders that can disguise themselves as stalks of bamboo. A pretty raw deal by any measure.

Weaver, Conrad, Brooks, and Lin's group manage to get a much better deal of it. They only encounter a harmless gigantic water buffalo and then meet the island's natives, who happen to be sheltering Hank Marlow (now John C. Reilly) in their midst. Marlow is therefore able to explain how things work around here. Kong is the king of the island, protector of all that live upon it so long as they are not hostile...or delicious, if Kong's treatment of a huge cephalopod living in the island's river is any indication.

However, the tunnels beneath the island are home to what Marlow calls "Skullcrawlers." Years ago, one killed Marlow's best friend Gunpei, and before that the biggest of the beasts killed Kong's parents. Kong is still growing, according to Marlow, but he's not sure he's grown enough to take on the big one.

So the survivors find themselves in a serious conundrum with three major conflicts once they all meet up again: First, Packard wants to kill Kong for what he did to his men. Two, if they don't get to the far side of the island within three days, they'll miss their only window to leave the island. Three, those seismic bombs woke up the Skullcrawlers and one of the little ones decimates most of the survivors before they can put it down.

So if a "little" Skullcrawler can do that, what will the "big one" do? Seems like keeping Kong around might be the best idea after all...

It almost seems silly to call Kong: Skull Island a "divisive" film, since it seems like any major release these days seems to manage to have people who love it and hate it in relatively equal measure. That becomes doubly true with a film so ensconced in fandom as a giant monster movie.

For mine own part, I love this film warts and all. And believe me, it has some serious warts.

One wart has seen many essays written about it, so I won't labor on it too much here other than how affects the film's presentation. By that I mean the decision to have a young white male director who had only done low-budget projects previously take over the reigns to a tentpole blockbuster. Don't get me wrong, overall it's clear to me that Jordan Vogt-Roberts was the right person for the job--but he also makes a few bad choices that a more experienced director might not have.

The worst of these poor choices has to be the film's overuse of slow-motion, or more specifically "over-cranked footage immediately followed by normal speed footage." Thankfully the majority of it happens during the initial helicopter fight so we don't spend the whole movie trying to ape Zack Snyder's style. (I make no apologies for that pun) However, it's a choice that really distracts from the film and I wish someone had told Vogt-Roberts to knock it off.

Another wart the film has is that, like Godzilla before it, we spend way too much time with the blandest of our protagonists--Conrad and Weaver. This is thankfully much less egregious here, since this film is much more of an ensemble piece. However, we do still end up with potentially interesting characters given little to do. Hell, Lin is given so little to do that one suspects Jing Tian was included solely to try and sell the film in China. I can't help but wonder if her character got way more scenes in the Chinese cut, in fact, but I feel like I would have heard of that if it were the case.

The film's final weakness, in my mind, is that there are several times when it writes itself into a corner and just hopes we won't notice. In one scene, a character is carried off and brutally dismembered by the island's knife-headed pterosaurs--but the characters never seem worried about the creatures after that incident. More egregiously, however, in Kong's first encounter with the big Skullcrawler he is quickly overpowered by it...

...but the creature then seems to just leave him alone. There's not even a token attempt to explain why it didn't use that opportunity to kill him, beyond the simple fact that if it had he wouldn't have been around for the big final fight. It seems like a glaring mistake that a script doctor could easily have fixed, but no one did.

Aside from those issues, as I said before, I love this movie. Much like King Kong Escapes its main goal is just to tell a fun story, and it excels at that. The final fight between Kong and the big Skullcrawler is a marvelous battle that goes in some delightful unexpected directions, and the film's moments of comedy are genuinely funny.

And the creature design is wonderful. While it's always a little sad to encounter a Skull Island without a single dinosaur on it, I have to give the film credit for giving us something almost as good. From our reptilian antagonists to ferocious giant spiders and even seemingly gentle creatures like the water buffalo and a giant stick insect, this island feels alive in the best way.

I also have to say that this is my favorite incarnation of Kong. I love the choice to have him walking upright, as he did in the 1976 remake, while also modelling his facial features on the original 1933 ape. It's true that Peter Jackson's version did a much better job of actually building Kong's character, but you still get a great sense of who this film's Kong is and the design is about as unique as "a gorilla but big" can really get.

Obviously, the other major goal of this film is to fully solidify its shared universe and it does a much, much better job of that than other much clunkier attempts like Iron Man 2 or Batman v. Superman: Dawn of Justice. Mainly this film succeeds because it actually focuses on the story it's trying to tell first and franchise-building second. Hell, shades of Marvel, it waits until the very end of the credits to give us a teaser for the upcoming Godzilla: King of the Monsters and you better believe that teaser still makes me as giddy as a schoolgirl.

At the end of the day, Kong: Skull Island is a delightfully fun giant monster movie, and most days I just simply couldn't ask for more.

Welcome to the Day Eleven of Hubri5Ween 2017, the fifth year of this nonsense! Click the banner above to see what everyone else did for K!
Posted by Random Deinonychus at 6:00 AM