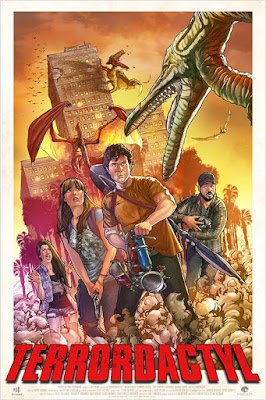 Before we get started talking about the movie it belongs to, just take a look at that title. It's amazing, isn't it? It's so beautiful and simple that you kind of feel angry that you didn't think of it, right? Hell, right now you're probably thinking there's no way the movie it belongs to could possibly live up to that title, like even if you went in with low expectations you'd still be let down.

Well, I'm here to tell you that your expectations are wrong.

You're not just going to feel let down, you're going to be pissed off, too!

Okay, okay, I'm overstating just a little bit. The sad truth is that Terrordactyl is not the worst movie I've reviewed this year, but it is bad. Not only is it bad, it's "horror comedy that can't do either of those genres properly" bad, which means that any humor you might get out of its incompetence is ruined by the film also trying to be funny.

So, exactly how bad is it, really?

Well, first off our film starts off by utterly confusing the audience because right from the prologue its story makes no sense. We see a random trucker get his truck destroyed by an egg-shaped meteorite the size of a football. And then, after he reacts by assuming it was an alien ship crash landing (?!) and that they owe him a new truck, a fully grown pterosaur appears perched on the truck next to his. (I'm just going to call the creatures "Terrordactyls" from here on in, since they doen't bear any resemblance to a single actual pterosaur species) The trucker runs away but is overtaken by the Terrordactyl and carried off.

See the problem? If the Terrodactyls are already implied to hatch from meteorite eggs, where did the adult come from?!

To tell you the truth, I don't even care enough about this movie to go into the actual plot synopsis as I normally do. Usually, if I see a movie and then decide to review it later, I try to watch it again at least once more so I can be reflecting on it with a clear memory.

However, the prospect of watching this film again was about as attractive a prospect as having to do math homework. So I'll just save some time by listing the official synopsis and then talking more about why I didn't even feel like this movie deserved a second look:


When a meteor shower rains down outside Los Angeles, Jonas (Jason Tobias) and Lars (Christopher Jennings), two friends stuck in tired, boring lives, head out to find a meteor and strike it rich. After recovering one, they start being stalked by terrordactyls, ancient flying reptiles that launch a full-on assault on the city.

Trying to survive, they go on the run where the unlikely heroes, along with Candice (Candice Nunes), a tough-and-sexy bartender, Valerie (Bianca Haase), her sultry roommate, and Sampson (Jack E. Curenton), a constantly drunk and brash ex-marine, soon discover that there’s more to the meteor than meets the eye…


Well, frankly you can kind of already see why I didn't care just from that blurb. It's rather like someone took Sharknado and Big Ass Spider and tossed them in a blender. Let me tell you, it feels that way when you watch it, too.

It's not even that this movie is bad. I mean, it is bad, but so is The Bye Bye Man and you already know I adored that piece of shit. No, this movie is bad in the same way that the average SyFy Channel Original Movie is bad: it just feels like they didn't even try because they knew they were making a bad movie so it didn't matter if actually did more than the bare minimum.

In some ways it's worse than that, however, because the film also decides it would be funny to have a running gag where Sampson, the drunk ex-marine, keeps getting killed only to be revealed to still be alive. Except that such a gag only works if either we are happy to see Sampson alive again each time or the gag builds to a truly whacked-out death that actually takes. Except Sampson is an odious character and the film fails to pay off the running gag because he still survives his final "death" at the end!

I am loath to say anything positive about a movie as shitty as Avalanche Sharks, but at least it actually made that same gag work.

Naturally, poor Valerie is killed off very early on because God forbid a film like this not kill the sexually promiscuous female character. I have to say, if they had given the "surprise, I'm not dead" running gag to her it might actually have been funny--so naturally they missed that opportunity.

I will give the film credit on two scores. One, the terrordactyls are actually pretty well-realized effects. Two, at least they appear to have actually been trying for something more like the much better Big Ass Spider, which actually aims to be a horror comedy instead of trying to assume you'll just laugh at its awfulness like Sharknado.

Okay, and I suppose I also have to give it credit for actually delivering on a kaiju-sized terrordactyl, even if not much comes of that.

I went in to this film genuinely hoping I would love it, especially given its amazing title. Alas, it was not to be.

Maybe someday someone else will give the title another shot and actually make something awesome with it. Until then, you should really do yourself a favor and just watch Big Ass Spider instead.

Welcome to the Day Twenty of Hubri5Ween 2017, the fifth year of this nonsense! Click the banner above to see what everyone else did for T!
Posted by Random Deinonychus at 6:00 AM