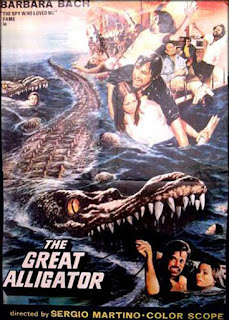 Like many people, I have my share of pet peeves. Or, as the late George Carlin called them, "psychotic fucking hatreds." And there is no petty hatred I am more psychotic about than when people confuse alligators and crocodiles.

It's true that being able to tell the two animals apart is not really that important in the grand scheme of the universe. It's not like if one bites you, you need to know if it's venomous. It's just that telling them apart is such an elementary school level of knowledge that, to me, it's like seeing someone confuse a lion and a tiger. And yet, so many people can't be bothered to tell them apart.

One of the many annoyances in Indiana Jones and The Temple of Doom for me is that the ending features the villains being devoured by alligators--in India! I should be enjoying their delightfully wicked comeuppance, but all I can think about is, "Where the Hell did those alligators come from?"

So naturally, I was initially pretty well disposed to hate The Great Alligator (or The Big Alligator River or even just Alligator, depending on which English version you're watching). The reason for this being that the film goes to great lengths to tell you its titular menace is an alligator, despite the fact that it could not be more obviously a Goddamn crocodile and there's no reason to pretend otherwise except to vex me.

And yet, I'll be damned if I'm not incredibly fond of this stupid, stupid movie.

We begin in a helicopter belonging to Joshua (Mel Ferrer), who is ferrying photographer Daniel (Claudio Cassinelli) and model Sheena (Geneve Hutton) to his brand new resort: Paradise House. Joshua proudly tells Daniel--whom he has hired to take photographs for advertising purposes--that the resort is the grandest undertaking of its kind, as it is a nature preserve that has perfectly preserved the wildlife around it and made sure not to damage the environment of the surrounding jungle. He's shown to be a liar on both counts almost immediately.

First, we're never told where we are, aside from "the Orient," but given this was filmed in Sri Lanka we can presume it's somewhere in South Asia. However, the wildlife stock footage includes Indian cobras, green iguanas, orangutans, hippos, and macaws--meaning that a great deal of the wildlife had to have been introduced by Joshua. Secondly, we see the workers for Paradise House dynamiting the trees to clear the forest, which is hardly "preserving" it.

Said workers, by the way, are said to be largely made up of the local stone age tribe, the Kuma. Joshua assures Daniel that they've actually improved the tribe's lives by hiring them to do all the manual labor, but you'll forgive me if I'm skeptical. However, to try and drive home that point, Joshua introduces Daniel to Allie (Barbara Bach), his head of staff who also happens to be an anthropologist. Daniel gets a significant look on his face when he sees Allie, but I have to be honest that I'm not sure if they knew each other before or if it's just because he has the hots for her.

Well, Daniel isn't the only one with the hots for the staff. Sheena quickly falls in with one of the Kuma and they make plans for some fun that evening. Daniel, for his part, explores the resort and manages to antagonize Joshua's right-hand man, Peter (Romano Puppo), as Peter is tossing live piglets in the river to ensure that the sign for "Crocodile Bridge" doesn't lie.

Of course, Peter may regret those words quite soon. Joshua, Daniel, Allie, and Peter are taking "Tarzan's Raft" out for a test drive and watching the installation of an underwater anti-crocodile fence to make a safe swimming spot, when frantic drums are heard from the Kuma village. The Kuma with them all react with concern, and then something big hits the underside of the boat. The natives all panic, shouting "Kruna"--until it turns out to be a log.

Kruna is the river god of the Kuma, but even Allie knows very little about it. However, it will prove very relevant soon. Ignoring the earlier panic, the young Kuma man takes Sheena out on the river in a canoe. Unfortunately, the drums resume as they are on the water and he frantically tries to return them to dry land. It's a bit too late for that, however, because an enormous crocodile catches up with their raft and devours them both.

Allie and Daniel happened to be near enough to hear the scream, but not to witness the attack. Daniel immediately puts two and two together when he finds a smashed raft on the beach, and discovers Sheena never returned to her room. Joshua scoffs at Daniel's concerns, and insists that even if there had been a crocodile attack that all guests who just arrived at the resort are still perfectly safe on land.

No, I'm not sure if it's the character or the movie that doesn't know that crocodiles can come on land.

Allie and Daniel decide to go visit the Kuma village, where the natives are in the midst of a ceremony of some kind. The chief angrily throws a spear at them when he sees them watching, then has a subordinate who speaks English tell them that Kruna is angry with them for helping the construction of Paradise House. This is why he has awakened and devoured Sheena and the native's brother. The native then tells them they must speak to Father Jonathan, the only white man to see Kruna, and then they will understand the danger.

Indeed, Father Jonathan (Richard Johnson), proves to be a crazy old hermit in a cave by a waterfall. He was once a missionary, but then he watched his entire group of missionaries be devoured by an enormous crocodilian that the natives told him was Kruna. Well, Father Jonathan switched Gods that day, and has spent the years since hiding in the cave and carving a stone effigy of Kruna.

Allie points out to Daniel that the stone effigy looks more like an alligator than a crocodile, despite alligators being foreign to "the Orient." I can't agree on either count, since the statue doesn't look all that different from a crocodile and China is generally considered part of "the Orient," and the Chinese alligator lives there. Although, it is both much too small to be dangerous and it is nearly extinct, so obviously Kruna would not be one of those.

Well, Father Jonathan decides they've come to bring him back to Kruna and shoos them out of his cave. He's certainly given the two of them lots to think about, but to further drive home the point, Kruna puts in an appearance to prove he really exists. The giant "alligator" attacks their boat, sinks it, and then eats the Kuma who was trying to spread his god's word.

Man, as gods go, Kruna is a real dick.

I might add it's here we get our first really good look at Kruna and, hoo boy. Let's put aside for a moment the fact that the prop is clearly a crocodile, despite whatever Allie insists. First, I do have to say that the full-sized prop is pretty good. It's not exactly convincing, but I have seen much worse, and it at least generally looks consistent. However, for many of the underwater shots, the filmmakers oddly opted to go for a miniature Kruna in what looks like a fish tank attacking boats--and the miniature they chose looks like a dollar store "alligator" toy that had the end of its tail chewed on by the family dog.

Well, now that we've met our poorly realized menace, it's time to set up our buffet line in earnest as night begins to fall.

First, Joshua tells the frantic Daniel that he has already called for a helicopter to arrive in the morning and refuses to take the issue more seriously than that. In fact, when he catches Daniel trying to radio the police to come now, he has Peter beat Daniel up. Secondly, somehow the resort's only helicopter was pushed into the river and it's going to take a lot of effort to get it back out. Thirdly, Peter finds that someone has sabotaged the radio.

However, Joshua decides to go ahead with the "Tarzan's Raft" party boat tour anyway. As Daniel watches the resort's handymen try to pull the helicopter from the water, he fails to see the Kuma silently kidnap Allie. By the time Daniel sees Allie being rowed out into the lagoon on a raft to be offered as a sacrifice, the party boat is already too far out to hear his cries for help.

To Joshua's credit, when Daniel swings by in a speedboat to warn him something weird is going on, Joshua tells the boat's driver to head back to the dock. Unfortunately, it's too little and too late, when Kruna shows up and sabotages the boat--and eats several of the staff and guests that fell off the boat. Two guests manage to swim to the fenced-off swim area by the docks, with one going to the hotel for help while the other takes a boat out to help everyone into the safety of the fence.

Just one flaw in that plan. First, the Kuma have killed everyone at the hotel and set it on fire. Second, the Kuma arrive with spears and flaming arrows to ensure that anyone who leaves the water is killed at once.

Unfortunately for the trapped guests, that fence was not built with a crocodile the size of Kruna in mind. Soon the beast has torn his way through and he begins to feast on his helpless prey...

There's not much else to say from this point on, since there aren't too many surprises. The carnage, while not actually any gorier than Jaws, is truly enthusiastic without that weird sense of sadism you find in something like Piranha 3D and its sequel. I can sincerely recommend the film on that quality alone.

Which is not to say that this is actually a good movie. It's stupid, clearly cheap, and more than a little racist. (Not only are the Kuma evil savages, their ethnic background seems to be "anyone darker than tan") However, I can't help but call it delightful just the same.

It's also inexplicable, of course. Sure, its funky soundtrack actually makes more sense than such contemporaries as Tentacles, but that's not saying much. However, the film still makes utterly bizarre decisions like the Kuma reacting to the sight of their dead god with a celebratory whoop and walking back into the jungle to leave the survivors of the massacre in peace.

And, again, the assumption that a rubber toy crocodile attacking toy boats and vans in a fish tank was at all convincing.

Of course, the film's many, many bad decisions tend to add to its favor as much, if not more than, its good ones, if you ask me.

Again, the rule that most killer crocodile movies suck is very still in effect for this one. However, I can't help but find this one enjoyable all the same. And, unlike the equally silly Crocodile, this one doesn't feature multiple incidents of on-screen animal cruelty--aside from some very agitated pigs being tossed into water on ropes.

So if you want a Jaws rip-off with a serious body count but don't care if it's actually a good movie, you can't go wrong with this one.

Welcome to Day Seven of Hubri5Ween 2017, the fifth year of this nonsense! Click the banner above to see what everyone else did for G!
Posted by Random Deinonychus at 6:00 AM