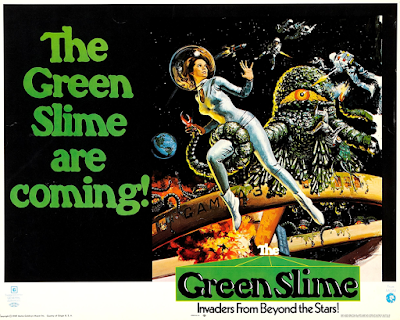 You know what's a sadly neglected musical niche these days? Rockin' horror movie theme songs, that's what. It's a bit of a stretch to say that it used to a booming industry, but today's film has what is unquestionably the greatest example of such a theme song.

Honestly, I could just drop this link to the song on YouTube and conclude my review. I mean, if you're not sold on the film with that alone you are dead inside.

Still, I suppose I should also mention that this is a Japanese-American-Italian co-production, filmed in Japan and directed by Kinji Fukasaku of Battle Royale fame. If that doesn't assure you that you're in for a good time, then let me just point out that the poster above is actually only dishonest in that the monsters are human sized at their largest. Everything else? Pretty much dead-on.

Okay, and the heroine does not get grasped in their tentacles whilst wearing a kickin' silver space-catsuit, but that's probably a good thing if you consider the powers of the film's monsters. We'll get to that, though.

Before we get our awesome theme song and our adorable monsters, however, we have to do a tiny bit of world-building. Some time in the near future, presumably the 1970s, a manned space station called Gamma 3 has been established in Earth's orbit. As the station and mission command on Earth are doing some routine communications, they are suddenly caught off-guard by some communication interference. Wouldn't you know it, this interference has been caused by the sudden appearance of an enormous rogue asteroid on a collision course with Earth!

The asteroid is dubbed Flora and it will hit the Earth within about 24 hours, which means they really weren't watching the till! The mission commander decides the only thing for it is to bring in Hardass Cleftchin--er, Commander Jack Rankin (Robert Horton) and ask him to come out of retirement in order to lead a mission from Gamma 3 to plant bombs on Flora before it can destroy all life on Earth.

To make things extra awkward, the current commander of Gamma 3 is Commander Vince Elliott (Richard Jaeckel) and he used to be close friends with Rankin until an incident where Elliott attempted to save one crewmember and got several others killed. To make things extra, extra awkward, Elliott is also now engaged to Rankin's ex, the station's chief medical officer Dr. Lisa Benson (Lucianna Paluzzi).

A word here about Rankin: I have yet to meet anyone who didn't come away from this film hating his damn guts, myself included. He's a smug prick with an insufferable grin and thumbs up that he is constantly throwing out. Worse, he's the kind of asshole who won't let anyone live down their past mistakes and is happy to disrespect both his old friend and his old partner by trying to get Benson to admit she still loves him.

That's not the absolute worst part about him, however. The worst part is he is all of these things and he is completely at fault for 90% of what goes wrong in the film.

Rankin gets started on being wrong about everything really quickly, too. The crew of the ship that departs Gamma 3 for Flora includes Dr. Hans Halversen (Ted Gunther), in case there is anything worthy of study while they are there. Rankin bristles at Halversen's inclusion, but he is ordered to allow the scientist along. Naturally, on the surface of the asteroid it is Halversen who first discovers the clearly animate green slime that is attracted to their electronic equipment and he immediately secures a sample in a jar.

The slime attaches itself to several of the team's electronic carts that they use to drive across the surface of the asteroid and bury their charges. This causes an issue, of course, and slows down their work significantly so that they have to rush to plant the charges and get back to the ship. So when Halversen appears with his perfect secure sample of the first specimen of alien life ever found, Rankin tells him he can't bring it on board and smashes it against a rock!

Naturally, this little temper tantrum splatters slime onto one of the team's space suits. Worse, after they successfully blow up the asteroid and return to Gamma 3 to party, Rankin orders all the suits and equipment be put through the decontamination process an extra time. This mutates the slime into a cyclopean creature with electric tentacles and it begins sneaking through the station, killing crewmembers that get in its way and feeding on the station's elecrtical systems.

So that's already twice now that Rankin has caused a potentially hazardous issue for the station. However, when the creature is cornered in the reactor room and Elliott's first plan to capture it fails, Rankin manages to make things absolutely catastrophic because he pulls a laser rifle and blasts the beast until it is gushing green blood.

Not only does this not kill the beast, but Halversen quickly discovers that the blood absorbs the station's energy and grows into more monsters. And Rankin already gave the order to shoot the monster on sight.

Soon the entire station is in danger of being overrun. Rankin and Elliott manage to coordinate a plan to lure most of the monsters into a section of the station they intend to seal off. However, after a cart accident leaves Halversen trapped on the wrong side of a bulkhead, Rankin and Elliott relive their old argument about whether it is worth risking several people to save one.

Except by the time Elliott opens the door, Halversen is good and fried and once they get another bulkhead shut on the creatures, it turns out to put them right next to barrels of flammable materials and an entire section of the station is blown apart. Worse, the vacuum of space does not harm the monsters and soon they're crawling all over the hull.

Now it's a matter of trying to evacuate the station before the creatures make it impossible, and then piloting the station into Earth's atmosphere to destroy it. But that means going outside to clear the monsters from the launch bay doors and someone has to stay behind to set the station's orbit to decay with very little time to bail out...

A year or two earlier, The Green Slime would surely have found its niche as perfect matinee fodder. However, it had the bad fortune to hit Western cinemas after 2001: A Space Odyssey had shown audiences what was truly possible with special effects.

Meanwhile, The Green Slime had special effects that compare unfavorably to the work Toho had done for The Battle in Outer Space a decade earlier. And unlike Destroy All Monsters the same year, it didn't have a menagerie of giant monsters threatening the world to distract from the cheesy spaceships--it just had some human-sized monsters that are far more adorable than menacing.

It's really a shame, of course, because this film is a delight in so many ways. Especially if you are a fan of Japanese sci-fi from this period, because Robert Dunham the controller of Seatopia from Godzilla vs. Megalon is Elliott's second in command and if you keep your eyes peeled you'll spot Linda Miller of King Kong Escapes fame in a few crowd scenes.

Then, of course, there are the memorable monsters. Sure, as I said they aren't exactly terrifying, but they are very unique and the suits are incredibly detailed--I particularly love the fact that the creatures all have a band of tiny eyes across their chests just below their main eye.

Also, it's always wonderful to see a movie preceding Alien that deals with humans trapped in a space vessel of some kind with an extraterrestrial menace. The movie gets a lot of mileage out of the setting, too. Even if the film's space sets aren't quite as memorable as the director's later Message From Space, there's a definite attempt to make them logical and workable. And it makes use of fights with the monsters both inside the station and out, for a nice bit of variety.

That said, it's hard to say that The Green Slime is a good movie. Mainly because Rankin, our hero, is so damned insufferable. I honestly can't be sure if Kinji Fukasaku did that on purpose, as a subtle jab at convention, but if so then he was a little too good at making it subtle. It makes spending the entire film in his company unpleasant.

Worse, we can already tell this is the kind of movie where any romantic triangle is going to be resolved by killing one of the corners. And, despite making a couple of his own bad decisions, Elliott is far more likable than Rankin and it irks to know he's destined for an electric hug because he isn't the hero.

That said, even though this movie isn't good, it is a lot of fun--and that's true whether you're watchign it to mock it or just to enjoy it. On one level, there is a lot to laugh at with this one and on another level it's great to just accept it as a goofy good time.

If nothing else, that theme song is worth watching the film for all by itself.

This has concluded Day 7 of HubrisWeen 2018! To see what the other Celluloid Zeroes chose for G, click the banner above!
Posted by Random Deinonychus at 4:00 AM