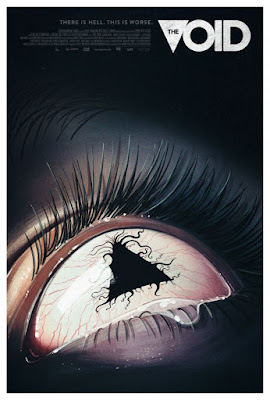 There's a common refrain these days that there just aren't enough original stories being told anymore. Usually this is just pointing out how sick to death we are of our only options at the modern cinema being sequels and remakes. However, the refrain tends to also imply to some degree that there is no value in stories that are unoriginal or at least that such stories are inferior.

This is patently false.

For evidence of that, look no further than The Void. It's a pretty standard protocol to describe a movie as "X meets Y" in order to give an audience a good idea of what to expect. You see this a lot in pull quotes. Oftentimes it isn't even all that accurate, but The Void could easily be sold as "Prince of Darkness meets The Thing and The Beyond" and it would be totally accurate.

The amazing thing is that that is not selling the movie short or criticizing it for being derivative. This is a perfect example of how to take well-known elements and mix them together into a genuinely good film.

We open as a man we'll later come to know as James (Evan Stern) flees from a farmhouse in the woods, with a door marked with a dark triangle. It's pretty clear something awful has been going on inside, but that's made crystal clear when a screaming woman rushes out, too. Unfortunately, she is shot by a man we'll later learn is Vincent (Daniel Fathers) and his seemingly mute son Simon (Mik Byskov). Vincent douses the wounded woman in gasoline and sets her on fire, promising Simon that James won't get far.

Luckily for James, though, he stumbles out of the woods and collapses in front of Deputy Daniel Carter's (Aaron Poole) police cruiser. Seeing that James is wounded, Daniel rushes the lad to the nearest hospital. Of course, that means he has to take him to the hospital that was largely abandoned after a fire. In fact, the staff there are really only there for absolute emergencies and to get the hospital's records and equipment transferred to a different facility.

Which means that there's an actual reason for the hospital being deserted, unlike many horror films.

It's a bit awkward for Daniel, though, because his estranged wife, Allison Fraser (Kathleen Munroe) works there as a nurse. The only other staff at the place at this time are Dr. Richard Powell (Kenneth Welsh), nurse Beverly (Stephanie Belding), and intern Kim (Ellen Wong). Kim is keeping a patient named Cliff (Matthew Kennedy) company in his bed when she is called to the front to assist Beverly with the files. Meanwhile, pregnant young woman Maggie (Grace Munro) and her grandfather Ben (James Millington) have arrived at the place in order to get Maggie a check-up.

When Daniel brings James in, the young man's behavior makes the staff suspect drugs are in his system and he has to be sedated. While Daniel is trying to call in to his office to update them, he happens upon the shocking scene of an entranced Beverely stabbing Cliff to death with scissors. Even worse, she has already cut off most of her own face. In a panic, Daniel shoots her dead.

Naturally, this means someone else needs to be called in. Luckily, state trooper Mitchell (Art Hindle) was already on his way to question James after discovering the bloody scene at the farmhouse. He takes Daniel's gun, as is procedure. However, when Daniel goes outside to radio in about the shooting, he is attacked by someone in a white hooded robe with w triangle over the face.

Daniel manages to escape the cultist, but he is wounded badly. Worse, everyone sees now that a huge mob of robed figures has surrounded the hospital.

And then things get even worse. A scream from James's room leads Daniel and Mitchell to discover that Beverly has transformed into a horrid, tentacled monster and she is trying to eat James. They manage to rescue the poor bastard and lock her in.

So now they're not only trapped in the hospital by the cultists, but they're trapped in there with whatever Beverly has become. And when Vincent and Simon fight their way into the hospital, things naturally manage to get even worse...

The influences of The Void are plain as day. Yet, while many movies would go out of their way to call attention to the fact that they know what movies they're copying, The Void accepts that you either know or don't and tries to focus on telling a compelling story with the motifs it is borrowing.

And, in some ways, it actually even improves on the elements it borrows. Much as I love Prince of Darkness, I think this film does a better job with a few of the set-pieces it copies.

What's more, it's always great to see a film that properly utilizes practical effects but also understands the benefits of said effects. There are a few moments of CGI in this film, in fact, because the filmmakers clearly understood what effects made the most sense for which parts.

I obviously left a lot out of my summary here, because I feel this is a film that really deserves to be seen with fresh eyes. It may not have very many surprises for the veteran horror viewer, but those it has are well worth being experienced on their own terms.

I genuinely hope that we will be seeing more horror movies like this in the years to come.

Welcome to the Day Twenty-Two of Hubri5Ween 2017, the fifth year of this nonsense! Click the banner above to see what everyone else did for V!
Posted by Random Deinonychus at 6:00 AM