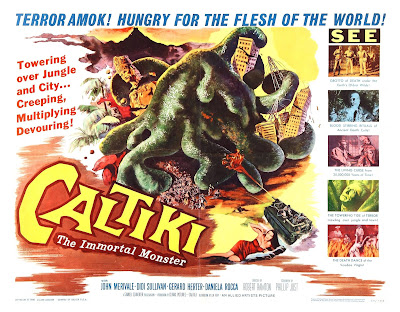 One of the greatest things about the modern age of media is the host of options for finding once obscure films. Twenty years ago, I would never have dreamed of the movies I would have sitting on my shelf in near-pristine transfers. You better believe Caltiki, The Immortal Monster is one such film.

When I was a child I first read about today's movie in Jeff Rovin's Encyclopedia of Monsters, and even though he very much made clear that the monster in the film was not as horrifying as the one on its poster, I was fascinated all the same.

Well, fast forward to 2017 and the marvelous Arrow Video releases this film on Blu-ray and I immediately snatched it up. And you better believe I got my money's worth.

We open with footage of a Mayan ruin, while our typical somber narrator tells us about how the Mayans mysteriously abandoned their cities in the seventh century and fled into the jungle. As a nearby volcano dramatically erupts, the narrator warns that it had something to do with the return of a deadly goddess the Mayans worshipped named Caltiki!

Yes, I realize that it's an obviously bogus name for a Mayan Goddess. Just roll with it, okay?

We return to the film as a man carrying a revolver stumbles away from the ruins in a state of horror and shock. He returns to the camp of archaeologists he belongs to and collapses. And boy, the camp he returns to sure is made up of characters. The expedition leader, John Fielding (John Merivale) spends much of his time bickering with his wife, Ellen (Didi Perego), while his expedition partner, Max Gunther (Gérard Herter) spends much of his time trying to hit on Ellen. Max's wife, Linda (Daniela Rocca), is very much aware of her husband's interest in Ellen but seems to be more delighted in his failure than angry at his attempts.

Well, the soap opera antics stop briefly when their companion returns, especially since he was supposed to have been with another of their team and a couple native porters. His revolver is empty and all he can do is mutter the name "Caltiki." This leads Bob (Daniele Vargas), the team's other remaining and unattached archaeologist, to conclude that the afflicted man must have found some treasure and killed the others in a bid to keep it all for himself. However, that just doesn't track for the others.

When they explore the ruins, they find the missing man's film camera in a grotto, near a body of water beneath the statue of a goddess that they identify as Caltiki. However, they mange to overlook the desiccated corpse lying close by. When they develop the film, they see that something attacked the missing man from behind as he was filming and the survivor fired at it to no avail. Bob volunteers to wear the diving rig the next day in order to see if maybe the missing scientist ended up in the pond. However, he also ignores Linda's advice to not film the ritual dance that the natives are currently enjoying, laughing off the notion that it could mean death. He does, to his credit, have the decency to look a little sheepish when the sensual dancer at the head of the ritual catches him watching and she screams.

Well, he really should have listened to Linda. During his dive to the bottom of the pond--which is surprisingly well lit despite the only light source shown being the torches on the surface at least 20 feet above--Bob finds no evidence of the missing scientist, but does find skeletons and lots of treasure. He shows John and Max, and while Max is just as eager to recover more treasure as Bob is, John fears it's too dangerous for another dive. However, Bob is so eager to go down that John agrees, and that's when Bob discovers that the cross around his neck is no match for the goddess that lives in the pond.

When they feel something pulling on the line, the team on the surface pulls Bob up--only to pull off his diving mask and discover that he no longer has most of his face.

Well, they don't have to wait long to find out what happened, because the pond churns and out pops a huge, ambulatory blob. And while it is very clear that this blob is actually a sack of something that has been covered in tripe, I still think it looks pretty awesome. However, despite how quickly it reduced Bob to a skeleton, Caltiki proves somewhat easier to outmaneuver on land. Hell, everyone has almost escaped when Max decides to run back to retrieve the bag of treasure that fell next to the beast.

Max is rewarded for his greed when he trips and falls right into the blob. Luckily for him, it only swallows his right arm and John is able to rush over with an axe and chop away at the blob until Max comes free. However, Max's arm is still covered in the blob and he is clearly not enjoying the experience.

Well, John's immediate concern was getting Max to safety and making sure the native porters didn't touch the gunk on his arm, but the big blob is still a problem and it's coming out of the cave after them. Luckily, if inexplicably, there is a truck nearby full of barrels of gasoline. (Note that the truck has the wheel on the right side, which I'm pretty sure is not the case in Mexico) John points the truck at the blob and dives out just in time to ram the gooey fiend with the truck, causing a huge explosion rendered via some simply adorable miniatures. This is sufficient to kill the monster, luckily.

Well, Max is flown to a hospital in Mexico City, where we see the doctors graphically remove the blob from his arm--and much of his arm goes with it. In fact, we'll later see he was left with a skeletal arm which looks totally awesome but doesn't make any sense. I mean, wouldn't they just amputate it?

No matter, the important thing is that John is able to take the remaining chunk of blob to a nearby laboratory. There it is determined that the creature is actually an enormous single-celled organism, and a somewhat dubious machine is used to determine the specimen is twenty million years old. This is, naturally, a very big deal. However, it's also determined that the creature is not only radioactive, but that it absorbs radiation from outside sources--very quickly, in fact, as they almost cause it to grow out of the box it's in by exposing it to radiation.

Unfortunately, all the pieces are quickly set in motion for things to take a very bad turn. We find out Max is still being poisoned by the toxins the creature left in his system and it is affecting his brain, gradually turning him mad. (Which really just means he acts like more of an asshole than usual) John took a sample of Caltiki home with him to keep in his lab, which means it's in a prime position to menace them both Ellen and their daughter when it inevitably wakes up again.

Oh, and it will be waking up very soon, indeed. John had mentioned a Mayan prophecy about a sister from the sky arriving to reunite with Caltiki, which one of the other scientists felt was somehow significant. Said scientist visits an observatory to determine that there was a comet that passed close to Earth when the Mayans vanished, and that same comet is now passing Earth again--and it's radioactive.

Unfortunately, by this time Max has already killed a nurse and escaped the hospital to head to the Fielding house, while John is summoned to the lab where the other Caltiki suddenly woke up and killed the night watchman and had to be put down with fire. So by the time John hears about the comet hypothesis, his family is already in the sights of a homicidal madman and a rapidly growing and multiplying carnivorous blob...

It's easy to see where Caltiki, The Immortal Monster got its ideas. You have the character with a blob devouring his arm (The Blob), who then goes on a rampage with his damaged arm (The Quartermass Xperiment), and then you have the race to save the world from a radioactive blob menace (X the Uknown). It definitely lacks originality, but I have never found that to be an issue if the film still delivers on a good time and this most certainly does.

For one thing, the climax is not quite as dynamic as the American poster implies, but it is close. Instead of a giant blob destroying a city while tanks and soldiers face it down with flamethrowers, we see several gigantic blobs take over the hero's mansion while tanks and soldiers try to take them down. This film does not really have the means to pull off this climax, but it sure does try its hardest--even if the miniatures are hilariously bad.

And really, there is a lot about this film that is hilariously hokey, but it was also one of the first films where Mario Bava was credited as the director and it drips with atmosphere. Bava would later be known for his amazing use of color, but the man knows how to use black and white as delightfully as any earlier noir director. The visuals alone often elevate this movie to much more than just cheesy matinee fodder.

But make no mistake, this is definitely a cheesy film, and I love it all the same. Silly pseudoscience, obviously bogus history, and special effects that are woefully unable to keep up with their ambitions: I adore it all.

Well, not all of it, there's definitely some racism and sexism at work, mainly in the character of Linda. We're basically told that the reason Max is more interested in Ellen than his smoking hot wife, is that Linda is a "half-breed" and it's heavily implied she was a sex worker when he met her. Worst of all, she ends up being killed by him because she oddly loves this complete asshole so much that she tries to help him get his hands on Ellen before finally thinking better of it and taking a bullet so her blonde friend can escape.

However, if you can look past Linda, the film is actually not as horrible on that score as most of its contemporaries. Even the natives early in the film, despite being a diverse group of what the filmmakers deemed sufficiently "not white", are treated with a lot more respect than you would expect. After all, Bob suffers pretty horribly for not respecting their traditions because he considers himself superior to them.

While I would have to say that Caltiki is not quite up to the level of the many films it imitates, it does come awfully close. After waiting decades to actually see it, I found it fulfilled my best hopes for it nicely and I highly recommend it despite its obvious flaws.

And naturally it must be said that Arrow did an amazing job with the Blu-ray. If you're considering getting it, I urge you to do so at once.

Welcome to the Day Three of Hubri5Ween 2017, the fifth year of this nonsense! Click the banner above to see what everyone else did for C!
Posted by Random Deinonychus at 6:00 AM