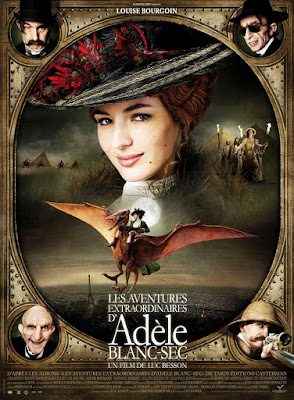 [Yes, I am sort of cheating by using this as my X review, but that's what the Blank Scrabble Tile is for!]

Luc Besson sure has a varied resume, doesn't he? Most recently he decided to adapt an influential French comic book series when he made Valerian and the City of a Thousand Planets, which managed to crash and burn pretty hard--at least partially because it was "influential" in the saw way as John Carter. When your source has inspired a slew of imitators, it is going to feel like a rehash of earlier ideas.

Hell, even Besson's own The Fifth Element was a better riff on the basic material. I'm not here to rag on that film, however. No, I bring it up as a roundabout way of pointing out that it certainly wasn't Besson's first attempt at bringing a famous French comic book to the big screen.

And boy, it would have served Valerian much better if Besson had given it even a fraction of the quirky attitude he gave today's film!

In Paris, France circa 1912, we join a random drunk who is about to have a very odd night. First, he sees strange lights near the statue of Joan of Arc. Then he sees a car containing a well-known former prefect and the showgirl he is having an affair with--which is run off of a bridge when it is attacked by a Pterodactyl!

Now, as it turns out, these two events are related. The lights were caused by eccentric scientist and occult practitioner, Professor Esperandieu (Jacky Nercessian), as he was levitating himself and everything in his apartment. Why was he doing that? Why to hatch a Pterodactyl out of its egg in a nearby museum!

Esperandieu is delighted to find that he can see through the creature's eyes and even control it. Unfortunately, whenever he is not controlling it, the Pterodactyl becomes dangerous--hence why it caused the death of the prefect.

This is all odd enough, and certainly too baffling for Inspector Albert Caponi (Gilles Lellouche) to make sense of when he is assigned to the case. However, it gets even stranger because we will later learn that Esperandieu brought the Pterodactyl to life as practice.  For what, you ask? Well, as a favor for a young friend of his, the famed and notorious journalist/author/adventurer Adele Blanc-Sec (Louise Bourgoin).

See, Adele is presently in Egypt--despite promising to go to South America for her publisher--in search of the mummy of Patmosis, the supposed personal physician to Pharaoh Ramses II. She needs Patmosis for a consultation and Esperandieu was supposed to bring him back to life for her. Naturally, she runs into a few complications: first her guides turn on her, then they change their mind and help her again, and then she is found by the grotesque Professor Dieuleveult (Mathieu Amalric) along with the soldiers he brought along to kill her via firing squad.

For Adele, this kind of certain death is just Tuesday.

Sure enough, Adele manages to set off an explosion and outruns a fireball in order to use the sarcophagus of Patmosis to escape into a secret passage. However, when she gets back to Paris, she learns that Esperandieu has been arrested. When Inspector Caponi paid a visit to Esperandieu, the old kook had the Pterodactyl in his apartment and it went berserk at the sight of Caponi eating a hard-boiled egg. The creature then escaped, but that put the blame for the deaths caused by the beast right on Esperandieu's head.

A head that is due to be chopped off by the guillotine in only a few days.

Adele is desperate to save Esperandieu, since only he can revive the mummy and only the mummy can heal her poor, dear sister Agathe (Laure de Clermont). Agathe has been in a catatonic state ever since a tennis accident drove a hat pin through her skull, and Adele blames herself. However, her increasingly outlandish attempts to break Esperandieu out of jail all fail in montage form. And attempting to get the President to pardon him only results in her being detained for "attacking" the President when she tackles him to save him from the Pterodactyl.

The Pterodactyl just makes off with the President's Scottish terrier, instead. However, it apparently just wants the dog for a friend, as a young scientist named Andrej Zborowski (Nicolas Giraud) has already figured out that the Pterodactyl hatched from an egg in his museum and he has set up a nest for it to return to, complete with food so it doesn't keep eating sheep or humans.

Andrej, more importantly, is creepily obsessed with Adele and writes her constantly. In his latest letter, he reveals what he knows about the Pterodactyl. And so Adele realizes perhaps her grandest ambition yet, by flying the Pterodactyl to rescue Esperandieu from the guillotine.

However, when a big game hunter shoots the Pterodactyl, it reveals that Esperandieu is linked to the creature and if either one dies so does the other. So it's a race against time to get the old mystic back to Adele's to bring her mummy back to life before he dies...

In case it hasn't been made clear from my synopsis, this is a very silly film. I've left out multiple plot lines and side characters, but you can still tell there is a lot going on. Indeed, while the film does occasionally waste time on subplots that we really don't care about, it still moves along at a brisk clip and there is so much happening that you rarely feel its 107 minutes.

You can also tell that this is a film based on a comic book, since virtually every character is covered in some kind of heavy makeup to make them look cartoonish. At times it can be effective and other times it's very unsettling and distracting--I mean, Esperandieu is supposed to be a likable character but he looks like the terrifying Six Flags dancing old man mascot.

However, if you can roll with the aesthetic--and a few moments that come across as a bit racist when Adele is in Egypt--there is a lot to enjoy in the film. I'm always happy to see a Pterodactyl on the rampage and most of the CGI that brings it to life is solid, as is the CGI that later brings mummies to life.

As for the cast, everyone does great with their roles but Louise Bourgoin is particularly delightful as our brash and daring heroine. Adele is perhaps a bit too abrasive at times, but we still root for her the whole time. Having such a charismatic actor inhabiting the role definitely helps and she is, of course, stunningly beautiful.

Rather annoyingly, the film did not get a release in the United States until 2013 when the usually reliable Shout Factory released a copy that had been cut up to remove some brief nudity to make the film a more traditional PG-rated family film. Thankfully, they remedied their mistake ever so slightly by releasing a "Director's Cut" edition only a few months later, but it is still a frustrating example of how American society is disgustingly backwards. God forbid somebody rent this film for their child and see a brief glimpse of Louise Bourgoin's nipples!

Of course, while I like this film quite a bit, it could use a bit of editing. The events following the awakening of the mummy, for instance, is one of the few places where the film drags a bit. If Shout Factory had trimmed those sequences a little shorter instead of excising a tiny amount of nudity, I wouldn't have complained.

However, if you're in the mood for a light, pulpy adventure, you're likely to have a fun time with this one.

This has concluded Day 24 of HubrisWeen 2018! To see what the other Celluloid Zeroes chose for X, click the banner above!
Posted by Random Deinonychus at 4:00 AM