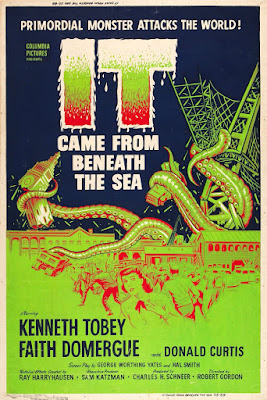 I mentioned previously that in the early stages of development, the titular monster of the original Godzilla almost ended up being a giant octopus. Thankfully, that did not happen since I doubt the character would have had the same staying power in that form. However, a city-destroying giant octopus is such a cool idea that someone was bound to also think of it, and actually get a movie about it made.

Even better, when it came time to make this concept a reality, the filmmakers tapped Ray Harryhausen to bring their giant octopus to life. Although, in a ruthless bid to keep the effects budget down, Harryhausen was told to only animate six of the beast's arms and the finished model actually only had six attached to it as a result.

To be fair, it's not as if the average viewer was going to be counting the number of tentacles an octopus has in a movie. That's nerd stuff!

At any rate, we open with a submarine on testing maneuvers in the Pacific. The commanding officer is Commander Pete Matthews (Kenneth Tobey) and he wasn't expecting anything beyond the routine, so naturally the sub encounters a mysterious, huge sonar signal. Worse than that, the signal grabs them and then turns out to be so radioactive that it sets off the sub's Geiger counter.

The signal eventually lets go, but it leaves a mysterious chunk of rubbery flesh behind. Once the sub makes port at Pearl Harbor, Matthews and his superiors wisely turn the flesh over to the best experts on marine life that they can find: Dr. John Carter (Donald Curtis) and Professor Lesley Joyce (Faith Domergue).

Joyce is reluctant to stay on and study the specimen, however, because she has something important to do elsewhere. Carter assures Matthews that Joyce needs to be there if they want to have any hope of solving this mystery, so Matthews drafts her into staying on--which she is not happy about.

Yes, Matthews and Joyce will be hooking up soon.

It takes the two scientists a shocking amount of time to figure out that the flesh belongs to a giant octopus, all things considered. There is a bit of a twist, however. The octopus isn't a mutant or anything like that--rather the poor thing was irradiated by H-bomb tests and now its usual prey, fish, are driven far away from it by their internal Geiger counters.

Look, just go with it.

At any rate, it makes sense that the octopus would seek prey that can't sense it coming and humans turn out to be ideal. There have been some mysterious lost ships recently that seem to back up this hypothesis, but the big brass are still reluctant to believe it. Confirmation for the audience comes quickly when we see the octopus sink a trawler.

Now, sailors reporting that their ship was sunk by a giant octopus tend not to be taken seriously once they get rescued. So it takes Joyce essentially seducing one of the sailors to get him to describe his experience where Matthews and his superiors can hear it.

The big brass are mostly convinced by this and soon all reports that might be a giant octopus are being carefully collected. One gets Joyce's attention: a missing family on the coast of Oregon. She's especially convinced when Matthews and Joyce arrive and the local sheriff shows them the site of the "car accident" and there are clear sucker marks on the beach.

The sheriff laughs when they ask if there have been any "sea serpent" reports lately, but he doesn't laugh for very long since he gets to be the octopus's next meal during a search of the beach. Our heroes were luckily far enough away that they can easily escape inland.

The octopus makes its way much further South again, despite the Navy's best efforts to drop depth charges on its head. Electrifying the Golden Gate Bridge and stringing up electric nets just results in making the beast so angry that it destroys the bridge in the film's most famous sequence.

Joyce and Carter consult with the Navy on how to kill the octopus, advising that the average torpedo is way too slow to keep up with the creature. So a special torpedo is crafted that propels itself very much like an octopus does.

However, by the time the torpedo is brought to San Francisco to be loaded into a submarine, the octopus has begun its assault on the city. Buildings are smashed and helpless civilians are snatched up in the monster's suckers.

Carter and Matthews board the submarine and go in for the attack. Flamethrower troops drive the beast back into the bay and the torpedo is launched into the octopus's head. However, the octopus grabs hold of the submarine and won't let go--so now Matthews and Peters need to figure out how to get free so they can detonate the torpedo without destroying themselves, too.

As Harryhausen's career of effects works goes, this film falls somewhere in the middle. There are some genuinely effective sequences, even with the reduced budget. The attack on the Golden Gate Bridge is a particular standout. However, there are also some duds.

As you can see above, we get a close-up of the octopus's eye that looks nothing like an octopus's eye. There are also some very jerky moments with the octopus where the animation feels rushed.

Then there is the fact that the octopus's size is wildly inconsistent. I mean, consider how big it is when it grabs the submarine at the end of the film and try to imagine how there could be any way the sub could have escaped from it in the film's beginning.

Those are minor issues, of course. The bigger concern in a movie like this is how engaging the human characters are, since they are what will keep us going between monster attacks.

Well, luckily the film relies on Kenneth Tobey and Faith Domergue to be our major leads. They are both charismatic and engaging, even though poor Tobey is written to be the typical embodiment of toxic masculinity that you expect the hero to be in a film like this. In the film's most memorable scene, Donald Curtis has to tell Tobey that women in the 1950s can handle themselves and think they are just as capable as any man--while Domergue is standing between them.

As one of the cycle of 1950s radioactive monster films, It Came From Beneath The Sea has a lot of stiff competition--even from other films with Ray Harryhausen effects! It's thus a bit unfair to say that it doesn't distinguish itself as one of the best of the lot, since it certainly does try.

Yet there is no question that this is an entertaining film that moves along at a good clip. If you can look past some of the most ludicrous moments of 1950s sexism, it's definitely a rewarding film. I'd say give it a look.

Just don't watch the awkwardly colorized version on the Sony Blu-ray release. You'll want to scratch your damn eyes out within minutes.

This has concluded Day 9 of HubrisWeen 2018! To see what the other Celluloid Zeroes chose for I, click the banner above!
Posted by Random Deinonychus at 4:00 AM