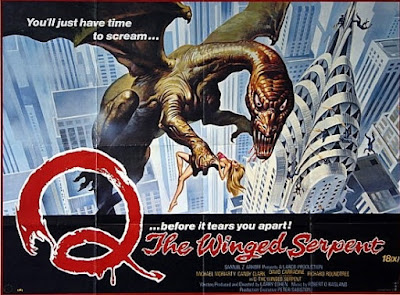 Larry Cohen is a filmmaker who really needs to be talked about more often.

Oh, sure, in the kinds of circles I hang out in, he's mentioned in the same breath as someone like John Carpenter, but if you ask me he deserves that kind of reverence everywhere. He has had a wide-ranging career as writer, director, or both; from Blaxploitation to monster movies to thrillers, and even his lesser works tend to have something incredible to offer a viewer.

Of course, my love for Cohen is helped by the fact that my introduction to him was through today's film. I was already pretty predisposed to like a film about Quetzalcoatl setting up shop in New York City and going on a rampage, but Cohen delivers so much more than even that amazing premise would imply.

New York City in 1982 is not exactly the safest place to live in general, but everyone is still understandably baffled when people begin dying mysteriously in a variety of ways. The only common like between the victims is they were high up on skyscrapers when they were killed--a window washer who was beheaded, a sunbather violently snatched from her roof, a construction worker killed while trying to find his stolen lunchbox. It doesn't help that pieces of these victims start raining down on the streets and sidewalks.

No one has seen what did it, since whatever was responsible flies in line with the sun.

Even more bizarrely, people are also turning up dead in what appear to be ritual murders. First a flaying, then someone with his heart cut out. Homicide detective Shepard (David Carradine) and Sergeant Powell (Richard Roundtree) are naturally at a loss, but Shepard finds his mind unexpectedly opened when he researches the deaths and finds they fit the pattern of ritual sacrifices in ancient Aztec culture to appease Quetzalcoatl. More alarmingly, this means the victims had to be willing sacrifices.

Shepard begins to wonder if maybe there is a connection between the seemingly unconnected cases. What if whomever has been bumping off people in the Aztec fashion actually succeeded in calling forth the ancient feathered serpent? And how do you go about killing a God in the first place?

Well, Shepard's going to end up with a truly unexpected lead on the best way to exterminate a pesky deity--petty crook Jimmy Quinn (Michael Moriarty). Quinn plays wheelman for a diamond robbery, but when he is forced to take part in the actual robbery things go South. He manages to get himself hit by a cab while trying to escape and loses the briefcase of diamonds.

While fleeing from his accomplices, Quinn finds himself in a part of the Chrysler Building's spire that doesn't see much use. And in that spire are human remains and a huge nest, housing a huge egg.

Quinn uses his new discovery to rid himself of his accomplices by feeding them to mommy Quetzalcoatl when they come looking for those diamonds. However, he is also both a clever bastard and not as clever as he thinks, since he realizes he has information that everyone is going to want. So he goes to the police with the intent to blackmail the city into giving him what he demand in exchange for the location of the monster's lair.

There's a famous story where, after a screening of Q: The Winged Serpent, notorious film critic Rex Reed came up to the film's producer, Samuel Z. Arkoff. Reed enthused to Arkoff, "What a surprise! All that dreck--and right in the middle of it, a great Method performance by Michael Moriarty!" Arkoff simply replied, "The dreck was my idea."

Well, Reed was half-right. Moriarty is amazing in this film, and his performance puts the film on a whole other level. But Arkoff had the right idea with all that dreck. Whether you mean the awesome stop-motion monster, some truly effective scare scenes, or the hilarity of moments like an undercover cop dressed as a mime gaping in silent horror as another cop is picked off by the monster.

This is both a wonderful monster movie and, much like Wolfen, a fascinating snapshot of what New York was like when it was filmed. It's also, as Rex Reed suggested, a fascinating portrait of the kind of weirdly sympathetic loser like Jimmy Quinn. Whether true or not, Quinn claims he was framed for drug possession as a teenager and "the city owes me one," even though the rest of the items on his rap sheet he's genuinely guilty of.

There's no question that Quinn is a crook and an asshole, though, and yet he's incredibly compelling. He's definitely the final key to the film's success, but I still say there are so many other reasons to watch this film. If you haven't seen it yet, you owe it to yourself to check it out.

Welcome to the Day Seventeen of Hubri5Ween 2017, the fifth year of this nonsense! Click the banner above to see what everyone else did for Q!
Posted by Random Deinonychus at 6:00 AM