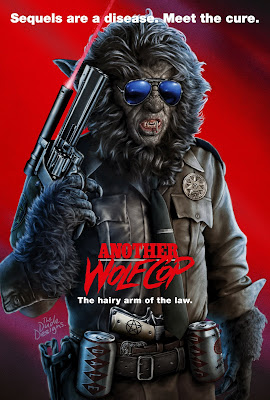 Low expectations are a hell of a thing, which is the simplest explanation for why I found myself inexplicably enjoying Another WolfCop far more than any other reviewer I've encountered thus far.

Regular readers, and people who can follow links easily, will know that I did not care for the original WolfCop because I felt it squandered its potential in far too many ways. Yet, I admit that I had just enough fondness for it as a concept that I was willing to give its sequel a chance. Especially when I saw the brilliant poster for the film that parodied the infamous poster to Cobra.

When the buzz I heard was that this film was not as good as the original and seemed to be trying too hard to be a Troma film, well, that definitely put a hopeless feeling in the pit of my stomach.

Even so, I wasn't all that shocked that I actually enjoyed this film much more than the first. Make no mistake, this is not what I would call a good movie. However, this is the kind of movie that somehow speaks to me personally. Quite possibly because this film is determined to throw as much at the screen as it can, even if nothing quite sticks.

At the very least this time the film actually delivers on the killer lizard monsters the first film cruelly teased me with and then failed to provide. Well, sort of.

It's been a year since the incidents in the first film, and the town of Woodhaven has been undergoing some changes for the seemingly better because a mysterious benefactor has bought the disused local Darkstar brewery from interim Mayor Bubba Rich (Kevin Smith, in a bit of a glorified cameo). From frame one we know that the millionaire motivational speaker, Sydney Swallows (Yannick Bisson, and yes that is really the character's name), is actually a Shapeshifter pushing his own sinister agenda: with the help of a few mad scientists and his badass queer-coded henchwoman, Number 2 (Kris "The Raven" Blackwell), naturally.

That agenda involves one of those light-up spinning toys you'd find at a dollar store--and producing a beer called "Chicken Milk Stout" that has the tagline, "Slam a cold cock!" Hey, you better quit your groaning now or this is going to be a long one.

Our titular lycan lawman, which is literally a joke the movie makes, has also been busy. In fact, when we catch up to Lou Garou he is in full WolfCop mode (Leo Fafard, again) as he gorily massacres a van full of hired goons transporting a box with a Shapeshifter symbol on it. Crashing a van full of dismembered bodies into the parking lot of the police station doesn't help Chief Tina (Amy Matysio, again) in her efforts to convince the public that WolfCop is an urban legend.

For some reason, this effort extends to her two new deputies, Daisy (Devery Jacobs) and Expendable Guy. It's really a silly plot cul-de-sac, because not only does everyone know WolfCop is a real thing--even an idiot like Mayor Bubba has seemingly figured out that Lou and WolfCop are the same person!

At any rate, the mysterious box turns out to contain Willie Higgins (Jonathan Cherry, again), whom we last saw getting shot dead by Tina. Well, it turns out that this is the real Willie, who was replaced by a Shapeshifter after being rectally probed by lizard aliens. Again, this is the level of the jokes, people. Of course, Willie wasn't left totally normal after his experience and he quickly finds himself dealing with a reptilian, penis-shaped clone of himself bursting out of his stomach and playing the part of his loud-mouthed Id.

Oddly, he reveals this to Tina but not his friend who he now knows is a werewolf.

Swallows, meanwhile, takes some time away from promoting the upcoming hockey game at his brewery to have his pet mad scientists build a robot assassin. Said robot is then sent to massacre a strip club named Club Phoque. Sadly, unlike Liquor Donuts, this joke name does not indicate it is a combination strip club and Pho restaurant--which is such an incredibly obvious missed joke that it's truly inexcusable.

Why does Swallows need this robot to kill a bunch of people in the strip club for his plan to succeed? Don't look at me, I'm just watching this.

When Daisy and the other deputy arrive on the scene, they found nothing but body parts. Daisy goes to call for backup and the expendable guy encounters the robot. He escapes harm at first because it can tell he has been drinking Chicken Milk, but the robot kills him after he shoots it. WolfCop shows up to help Tina confront the robot, but the robot proves too strong even for WolfCop and invulnerable to bullets. Luckily, after he gets beaten to a pulp by the robot, Tina saves him from certain death by taking it out with a Molotov cocktail.

Now, Swallows and his crew recover the robot not long after and have video footage of it beating the crap out of their most powerful foe. So you'd think they would want to either restore this robot or make more just like it, right? Apparently, Swallows did not become rich by making sound strategic decisions because we will never see a single hint of the robot ever again.

Oh, sure, they'll make you think they built an entire hockey team of killer robots later, but they all turn out to just be very human goons.

Luckily for our heroes, Willie has a sister in the nearby town of Regina who is weird into occult stuff, too. Kat (Serena Miller) is more than eager to help Lou. It turns out the best way to heal a werewolf is to have him snort powdered moon rocks like cocaine.

Oh, and then Kat reveals herself to be a werecat and has incredibly graphic sex with human Lou. Remember how there was a weird werewolf and human sex scene in the first film that seemed like it was just there to fulfill someone's very specific fetish? This is not like that, since it is actually clearly played for laughs--and it seems tailored to disgust even the most ardent furry.

Willie, for his part, has the misfortune of turning on a commercial for Chicken Milk while attempting to drown out the sounds of his sister and Lou banging. The result is that his miniature clone turns into a turkey-sized lizard monster and tears its way out of him. Lou and human Kat have to kill it, since Willie can't bring himself to.

Naturally, this is what Swallows had planned all along--he is trying to replenish the population of Shapeshifters since Lou has so effectively reduced their numbers.

As Tina and Daisy sneak into the brewery to learn what Swallows is up to, Mayor Bubba visits Swallows and makes the mistake of enjoying a Chicken Milk in his presence. Swallows activates the dollar store toy and we are treated to the sight of Kevin Smith fighting a lizard puppet that bursts out of his gut. For some reason, Bubba does not survive the birthing process like Willie does.

Swallows is planning to do this to the entire town at the upcoming hockey game, naturally, so it's up to our heroes to keep that from happening. Naturally, they aren't going to succeed because they're mostly incompetents. However, their failure is surprising on two counts.

First, it turns out that having a reptilian clone pop out of your stomach is not fatal unless it successfully climbs out of you. At one point Willie shoots the lizard baby climbing out of one victim and the guy seems to be immediately fine right after. Hell, the film never really addresses what happens to the clones they fail to kill or stop before they shut down the machine--it's a little like how The Amazing Spider-Man showed us The Lizard turning lots of people into lizard monsters and then just...forgot all about it.

Second, despite massacring an entire hockey team and all of his goons, the heroes don't even catch Swallows! If that's the way they set him up to be the villain in an upcoming part three, it is lazy and awful.

At a run-time of 79 minutes, I suppose it is to be expected that a few plot threads and things would just be utterly dropped or forgotten about. That's especially true of a film that throws so much random crap at the wall, like this one, but it still just comes across as a sloppy mess.

It's entirely possible, then, that the fact I enjoyed this one more than the first is merely due to incredibly low expectations. However, there are definitely glimmers of cleverness and fun that are more wisely spaced out than in the first film. Sometimes that is enough.

Of course, that's all well and good, but if a film is only enjoyable because it is better than its awful predecessor then that film is probably not very good, now is it? With a film like this, how successful it is depends a lot on how rewatchable it is.

When I considered watching this film a second time for this review, I realized that I absolutely did not want to. This film is fun enough but it is not worth more than one viewing.

If you hated WolfCop then you're not likely to get much out of this one. However, if you just simply need to see Kevin Smith headbutt a lizard man puppet sticking out of his stomach, this is the movie for you.

This has concluded Day 1 of HubrisWeen 2018! To see what the other Celluloid Zeroes chose for A, click the banner above!
Posted by Random Deinonychus at 4:00 AM