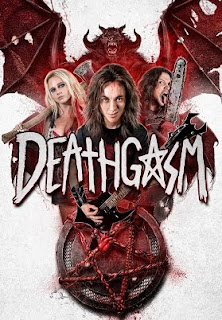 It really doesn't matter what the concept for a horror comedy is: if you tell me it was made in New Zealand, I am instantly going to be more interested than I would have previously been. After all, I have yet to think of a time they steered me wrong. Whether we're discussing early works of Peter Jackson like Bad Taste and Dead Alive, the killer sheep and were-sheep romp Black Sheep, or the amazing vampire mockumentary What We Do In The Shadows--they're just somehow on a higher level.

So I was a tad skeptical when I decided to give Deathgasm a whirl because, well, I'm not a metalhead and most comedy centered around metal tends to fall a bit flat for me. I also figured it would go for low hanging fruit and barely have any original ideas. I wanted to give it a chance, but I set myself up for disappointment.

And then I realized it was made in New Zealand and my expectations took a complete 180.

Life has taken a bit of a lousy turn for teen metalhead, Brodie (Milo Cawthorne), our sometimes-narrator. Well, to be fair when he opens the film he is covered in blood and apologizing for dooming the world, but that's getting ahead of ourselves. No, before he doomed us all, the problem Brodie found himself dealing with was that his mom had developed a meth habit and was institutionalized after a seedy incident with Father Christmas. Unfortunately, this means Brodie has been forced to move in with his more conservative Uncle Albert (Colin Moy) and Aunt Mary (Jodie Rimmer), whom he delightfully describes as "balls deep into Jesus."

Worse than that, his cousin David (Nick Hoskins-Smith) is the head of the local bullies. Since Brodie's lifestyle is already unusual and the first two friends he makes at his new school are the D&D nerds Dion (Sam Berkley) and Giles (Daniel Cresswell), he soon finds himself a new favorite target of his cousin and flunkies. It doesn't help matters that, against all odds, Brodie finds himself with a crush on David's girlfriend, Medina (Kimberley Crossman), who might actually be interested in him in return.

Well, things pick up from Brodie's perspective when, at the only sufficiently metal record store in town, he meets Zakk (James Blake). Zakk is the real deal, and Brodie quickly forms a tight friendship with the fellow, despite Zakk trying to appear mostly aloof. Recruiting Dion and Giles, Brodie and Zakk form a band--which Zakk ultimately names "Deathgasm" after an amusing brainstorming session.

After filming a rather embarrassing music video, Brodie runs into Medina while still in his makeup. The get some ice cream and, to Brodie's shock, Medina shows a genuine interest in learning more about metal. He happily shares some CDs with her, but is too awkward to try and make an actual romantic move.

That night, Zakk has something of a surprise for Brodie. After leading Brodie to an abandoned house in the town, Zakk reveals he's learned that the famous and recently vanished metal musician Rikki Daggers (Stephen Ure) is hiding out in the house. Brodie is incredulous, but naturally Zakk is right.

However, the meeting with an idol goes...not as well as hoped. Daggers is asleep, clutching an album in his hands. He starts awake when they try to take it from him, only to suddenly cease attacking them and tell them to take the record and run. They manage to leave in time to avoid being seen by the mysterious man who arrives, seeking "The Black Hymn," and kills Daggers after determining he no longer has it.

Of course, anybody looking for "The Black Hymn" probably belongs to some nefarious group and sure enough our hitman does. So nefarious, in fact, that when he returns to the leader of his order, Aeon (Andrew Laing), he gets his head chopped off for failing to obtain the item.

Meanwhile, Brodie discovers that there is sheet music inside the album that Daggers had. Naturally, thinking nothing of it, he proposes that the band try to play it. The result is that the band goes into a trance, the lights in the garage flicker, and unbeknownst to the band people close enough to hear the song--including Uncle Albert--become violently ill. Brodie snaps out of it and stops playing, but the group is sufficiently unsettled.

However, when Brodie translates the Latin on the music sheet, he realizes that it advises the reader that the song will summon a demon and ultimate power. This is the last thing that Brodie needs to see, since he finds himself feeling extra low after two incidents. First, David beats Brodie up for showing interest in Medina. Second, Medina suddenly seems to avoid him--unbeknownst to Brodie, this is because Zakk told her that Brodie doesn't want to see her around any more and then Zakk hooked up with her himself.

Needless to say, Brodie takes his frustration out far too rashly when he talks the band into playing the whole song. This time everyone without the range of the song violently vomits up blood, their equipment blows up, and the band passes out.

Well, if there was any doubt that playing the song released some weird and dark shit, that doubt is removed the next day when it becomes clear that anybody that was within the song's range has been possessed by demons that delight in making their hosts expel bodily fluids and tear their own eyes out. And naturally, that's just the beginning because the cult has descended on the town in order to welcome the arrival of the archdemon Aeloth, who will merge with the most evil human around and then take over the world...

Naturally, my partial synopsis is not getting into even a fraction of what goes on in this film. Simply read straight, you might be forgiven for thinking that this film is very typical and hits all the expected notes. To a certain extent, you'd be correct. However, there's a lot more going for this film than just the zaniness that automatically comes from a New Zealand horror comedy.

For one thing, while the main characters are definitely stereotypes, each of them brings a certain heart to their roles that elevates them. Sure, Zakk is mainly a dick who has a tiny shred of decency in him, but even he shows a bit more depth than you might expect.

The main standout, however, is Kimbereley Crossman as Medina. More than just the popular girl that the hero ends up with, Medina is a genuinely enjoyable character. The film actually does a good job establishing that she has lost interest in the boarish behavior of David instead of the usual case of "the love interest is dating a total jerk and is somehow okay with that until she falls for the hero." Best of all, she's just as awkward in her own way as the other protagonists and she is funny and adorable.

Best of all, her conversion to full-on metalhead by the film's end doesn't come across as her simply changing her entire personality for the guy she likes. Maybe I'm speaking from a biased point of view and a female reviewer would disagree, but you genuinely get the sense that she has found a niche she actually feels like she belongs in.

While it's played as a joke and a callback to an earlier fantasy scene of Brodie's, the scene of her listening to metal for the first time really drives this home.

So, it's great that the film has characters that are good, but what about the horror elements? It's clear from early on that this film is a bit on the lower budget side--I mean, Aeloth is basically just a very detailed fright mask--but it really knows where to put its money. From the amazing opening credits to the simple but effective demon designs, this film delivers on so many levels.

In spite of its more overt gross-out gags, I think the film deserves a chance. Is this a future cult classic in the making? Hardly. While I compared it to movies like Bad Taste, I don't think it quite achieves the same level as they do. It does, however, come mighty close.

And don't forget, if for some reason your best source of acquiring films is Wal-Mart, the pearl-clutchers that be insisted the film be renamed "Heavy Metal Apocalypse" before they would dare to let it darken their shelves. After all, the only fucking Wal-Mart approves of is fucking over their employees.

Welcome to Day Four of Hubri5Ween 2017, the fifth year of this nonsense! Click the banner above to see what everyone else did for D!
Posted by Random Deinonychus at 6:00 AM