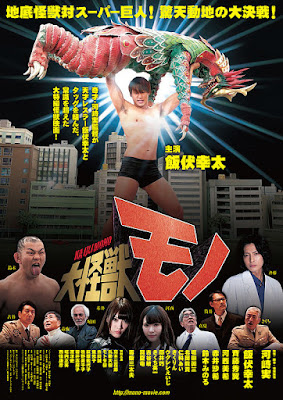 Since about 2013, it has been a great time to be a kaiju fan. The releases and moderate successes of Pacific Rim in 2013 and Godzilla in 2014 showed filmmakers in both East and West that audiences were prepared to flock to giant monster movies again. While there had been a few scattered attempts here and there in the years between, that had not been true since at least 2004.

So we have returned to a glorious time when we are positively tripping over new kaiju movies. This is, of course, a very double-edged sword.

On the one hand, we have so many to choose from that if one is a bit disappointing we'll have plenty of other choices. On the other hand, even as much as I love kaiju movies, there is still a potential for some truly awful films to be released in the genre.

You're already guessing which category Kaiju Mono falls into, but just wait--there's more!

Low-budget genre cinema can be hard to keep track of even in the country you live in, so prior to this year I don't believe I had even heard of Kaiju Mono despite it having come out in Japan two years ago. However, I am a huge fan of director Minoru Kawasaki's earlier film, The Calamari Wrestler, and I was excited to see a new kaiju film coming to American Blu-ray this year.

Of course, I knew that Kawasaki's oeuvre following The Calamari Wrestler has been very divisive, especially when it comes to his entries in the giant monster genre. For instance, in 2008 he made a comedy sequel to The X From Outer Space called Monster X Strikes Back: Attack the G8 Summit--and the critical reception of that film was so outright toxic that I have yet to bring myself to watch it.

Still, the premise of this film sounded delightful: a wrestler is grown to giant proportions to fight a kaiju! Sure, a few years earlier Big Man Japan did basically the same thing, but this seemed more in line with old school kaiju films, complete with miniatures and rubber suits. So I pre-ordered it for its August release.

I was about ready to give up on this being my K entry before it finally shipped out to me. Being an utter fool, I eagerly popped the Blu-ray into my player. It didn't take long for me to realize that the delays had been a failed attempt to protect us.

For you see, this is the most dreadful of bad movies: a bad comedy.

It's actually worse than that, to some degree. As a Japanese comedy there is an extra level of context that I am missing whilst watching it that makes a majority of the jokes baffling instead of merely unfunny. The distributors tried their best to help, with occasional on-screen subtitles explaining a joke that no non-Japanese viewer could get, but this is still a very rough ride.

It's an even rougher ride when you try to watch this dubbed, I might add. Not so much because the dub is terrible, but because someone felt the movie needed more awful jokes added to it. It does not and I could only tolerate about 15 minutes of the dub before I wisely switched to the subtitles.

We open with a Japan that is being wracked by earthquakes and volcanic eruptions. No one quite agrees what is responsible, but it naturally isn't long before a huge burrowing kaiju dubbed Mono has appeared and begun eating people--among the first victim being the pro-kaiju activist who first calls the monster "Mono" in the first place. Equally inevitably, Mono is totally immune to the military's attempts to kill her and in fact she shoots lightning from her horns just to make things even harder.

I say "her", incidentally, because Miwa Saigo (Miki Kawanishi) accidentally discovers Mono's egg while on an excursion in the country with her father's naive lab assistant who has a crush on her. She won't know it's an egg until much later, of course, which is fair since it looks nothing like an egg. Miwa's father, meanwhile, is disgraced scientist Doctor Saigo (Ryu Manatsu) who deals with his disgrace by dressing up as a magical anime girl.

These are the jokes, folks.

Dr. Saigo also has developed a formula called "Setupp X" that he thinks can help defeat Mono. After forcing the government representative to win a joke-off with his assistant before he will help--yes, really--Saigo then volunteers his assistant to be injected with Setupp X in order to become a superhuman giant and defeat Mono.

Ibushi is a naked giant, at that, but Saigo has already provided briefs that will stretch with Ibushi when he changes size. Once those are slipped on, Ibushi engages Mono in battle and actually beats the crap out of her until she flees.

The Setupp X wears off after a few minutes, but Ibushi is still a muscular hunk when he returns to human size. So he has to deal with the price of fame, which includes being seduced by a foreign spy, Scorpion (Saki Akai), who is out to steal his briefs.

No, really. It's actually one of the cleverest gags in the film when it's revealed to the government agents on her tail that she is not after Setupp X because so many scientists are inventing super human serums all the time, but super stretchy clothes are actually practical!

Miwa figures out that the object she found is Mono's egg and tries to return it to the kaiju. Ibushi grows to huge size to try and help, but he actually just ends up pissing Mono off. This time around, he gets thoroughly thrashed by the mother kaiju.

Now disgraced, Ibushi must learn new techniques if he is to have any hope of defeating Mono for good the next time they meet. Part of this involves a parody of a Rocky training montage, complete with a blatant copy of the original music. I guess the director forgot he had already given us the perfect version of this when he had a squid going through a training montage in The Calamari Wrestler.

Meanwhile, Mono's egg is getting much bigger and her appetite for human beings is getting more voracious. Our heroes better find the key to defeating her soon...

One of the issues Kaiju Mono has is definitely how scattered its plot and characters are. I've barely even touched on all the stock types we get throughout this film. On the one hand, as a kaiju fan this does mean that a lot of the characters are clear references to tropes I can appreciate. Hell, many of the scenes with the military seem to be clear, but affectionate digs at Shin Godzilla (despite Kaiju Mono making it into Japanese theaters two weeks before that film) and one of them is Bin Furaya of Ultraman fame! On the other hand, it leads to an experience that is often bewildering because you're trying to make sense of how each new person fits into everything.

Of course, again, I'm left wondering how many of the joke characters would actually make perfect sense in Japan. Several media people seem to portray themselves, and the ending where a man known for wooing elderly women tells Ibushi how to calm Mono down has to make more sense if you actually know who the hell he is.

The other issue is that the film tends to get too bogged down in the jokes that it doesn't deliver much of a story. The best spoofs have a discernible plot beneath all the gags, and this is even true of Kawasaki's earlier The Calamari Wrestler. This film just keeps giving us Mono rampaging and then fighting Ibushi in the exact same miniature city each time. It gets repetitive very quickly, and given how flat most of the jokes fall, that doesn't leave the audience with much else to enjoy.

It's a shame, because when this film connects it does so really well. I got a kick out of the fact that Ibushi trains to learn how to do a super impressive move that can stop a waterfall in its tracks, only for it to be utterly ineffective against Mono. Wrestling fans will surely appreciate how injecting Ibushi with the "evil gene" to defeat Mono means that he suddenly transforms into a villain wrestler.

However, a few clever gags are really not enough to recommend this film. Unless you are a kaiju completist you aren't likely to get much out of it, and if you watch the awful dub your wife will threaten you with divorce after only a few minutes.

Trust me, it isn't worth that risk.

This has concluded Day 11 of HubrisWeen 2018! To see what the other Celluloid Zeroes chose for K, click the banner above!
Posted by Random Deinonychus at 4:00 AM