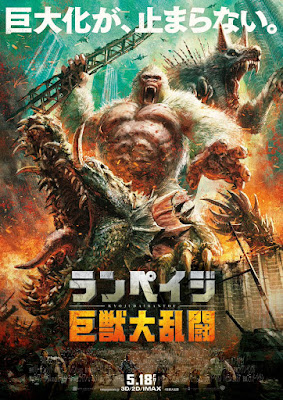 Video game movies are a largely maligned genre and it's not hard to see why. I mean, if you've seen Super Mario Bros. you're probably just as amazed as the rest of us that that didn't stop anyone from ever wanting to make another one.

However, there are some occasional bright spots even among this genre. So I was understandably excited when today's film, based on the awesome arcade game, was first announced. I mean, obviously I am excited about any giant monster movie period, and this was based on a game I had loved since childhood. My excitement only grew with the trailers, promos, and even the Walmart-exclusive toy line.

So naturally this was not only a must-see for me in the theaters, but I took my equally excited son to see it opening weekend. And yes, we did bring a Lizzie action figure to cheer her on.

Of course, within the first few minutes I knew folks would question my parenting decisions because it revealed that this is the sort of film that really pushes the boundaries of a PG-13 rating when it comes to violence. Inside a space station, we see panicked scientist (Marley Shelton) effectively swim her way past destroyed control panels, mangled corpses, and severed limbs to try and make it to the escape pod. Seems the rat they were using for an experiment has mutated into a huge, man-eating monster and she is not sticking around to join her compatriots in its stomach.

Unfortunately, ground control has the override on the escape pod and won't let her leave until she secures the canisters of the chemical that turned the rat into a spiny ROUS. With no other choice, she does as she is told--however she only just makes it into the escape pod ahead of the rat. The rat is going down with the station, but it also damages the pod door severely before it can be launched. So our hapless scientist escapes the destruction of the station only to die horribly when the pod ruptures on re-entry.

Did I mention that this is actually a fairly light-hearted monster movie? I say that because you might be thinking it is much darker based on that opening.

Indeed, the following scene that introduces primatologist Davis Okoye (Dwayne Johnson) and his crew at a gorilla sanctuary in San Diego is pretty much all comic relief. The main purpose, beyond introducing us to our human hero, is to introduce us to his closest friend, George the albino gorilla. George is a very good-natured fellow, even if he does love to pull pranks and respond to Davis's sign language with rude gestures.

Of course, that changes pretty quickly when one of those canisters crashes into his enclosure and sprays him with its contents. Worse, another canister lands in Montana and does the same to a wolf; and the third canister is eaten by a crocodilian in the Everglades. (The film plays coy so we never see if it was an alligator or crocodile, but based on Lizzie's appearance later and the fact that she is the largest of the three--I'm going to say American crocodile)

Now, in the video game the monsters were humans turned into monsters, and they turned back into little naked humans when they took too much damage. A shocking amount of people objected to the very reasonable decision by the filmmakers here to make them actual animals instead. To me it just made sense, especially once they clearly decided on a tongue-in-cheek monster movie instead of a cartoonish outright comedy.

Of course, you could be excused for thinking that the film is cartoonish when it introduces the human villains, Energyne CEO Claire Wyden (Malin Akerman) and her brother Brett (Jake Lacy). Personally, I love these characters, but there is no question that they could just as easily have escaped from a Captain Planet episode.

Currently the Wydens are tracking down the canister that landed in Montana, using a team of mercenaries that they hired. The team discovers that the canister is empty and there is a slaughtered pack of wolves nearby, who could only have been killed when one of their number absorbed the contents and mutated. So Claire orders that wolf to be brought back, dead or alive.

Meanwhile, Davis returns to work in the morning to learn that George has broken into the grizzly enclosure and killed the grizzly after a fight. Oh, and he's grown larger significantly overnight. Luckily, Dr. Kate Caldwell (Naomie Harris), the disgraced geneticist who designed the genetic goop for Energyne sees a news report on George. She quickly shows up to offer her aid, but she is not fast enough to prevent George from breaking loose and going on, well, a rampage at the zoo.

Some shadowy government officials, led by Harvey Russell (Jeffrey Dean Morgan, chewing more scenery than the monsters), appear and tranquilize George. They collect Davis and Kate, as well, since they figure they can use their input. The Wydens are not pleased that the government got ahold of one of their specimens before they could, but they get even more upset when the mercenary team discovers the wolf they were tracking has grown to 30 feet in length and is merely annoyed by gunfire. The entire mercenary team are devoured and their helicopter is smashed.

So Claire decides to put a very particular contingency into effect. The Energyne offices are in the Willis Tower in Chicago, so she activates a beacon installed on one of the skyscraper's famous radio towers. This sends out a high frequency signal that only the creatures mutated by the canisters will hear and the sound will enrage them so much that they will do anything to get to the source and destroy it.

Now, her assumption is that George will be killed when he downs the government plane he's on and then the wolf, nicknamed "Ralph" by "weirdos on the internet," will be put down by the military. However, she both fails to realize how hard the mutants are to kill, and she is totally unaware that a third mutant even exists.

As a side note, poor Lizzie not only doesn't get a name in the film, but she's the only monster who seems to be just minding her own business before the signal hits her.

George does indeed down the plane, with only Davis, Kate, and Russell managing to escape. However, George survives the crash. To Davis and Kate's shock, when they are brought to a military base and see that George and Ralph are charging towards a military ambush together. Obviously, a wolf and a gorilla shouldn't be working together, and Kate realizes it's the Wydens' doing.

The military blockade fails, of course. The evacuation of Chicago is ordered but there is no way the city can be emptied before the monsters arrive. The only hope lies in a cure that Kate knows of, stored in the Wydens' facility. It won't reverse the mutations but it will remove their increased aggression, if only Kate and Davis can get to it.

In the meantime, Lizzie has arrived in the Chicago River and now all three giant monsters are tearing the city apart...

If anyone tells me that they disliked this film, I honestly no longer trust their opinion. You either love this movie or you are wrong.

Sure, there are some aspects that could have been improved. For starters,George is kind of dull. The character design for Ralph and Lizzie is delightfully inventive, giving us mutant creatures with unexpected spikes and abilities. Ralph can fly like Varan The Unbelievable and throw spikes from his tail, while Lizzie has gills, tusks, and an Ankylosaur-like club. She pretty much is Anguirus.

Meanwhile, George just gets big. I suppose it was just assumed that the "good" monster wouldn't be as easy to root for if he wasn't at a slight disadvantage, but it also means that the only thing that makes him different from the usual Kong rip-off is that he has white fur.

The other issue is that the final fight could use a bit more pacing. The fight itself is great, but instead of three monsters fighting it is quickly reduced to two--and as much as I love the way three are reduced to two, it does seem way too sudden. The fact that Davis is helping George the entire time could be a negative for some, but I thought it was handled pretty well.

I'm also a little disappointed to learn that the film was supposed to end with a set-up for a sequel in a scene where Alexandra Daddario cameos as a member of a dive tour who are utterly unaware that a giant cephalopod is about to attack their boat. The scene was scrapped before the CGI got beyond the animatic stages, but it would have been perfect.

It is worth mentioning again that Rampage is very violent. I do not see this as a negative, per se, and my son did not ever seem bothered by it. However, a more "normal" four-year-old may not be able to handle some of what happens in this film, to monsters and humans alike.

Though I do want to address an odd misconception I have noticed many places and even heard on the usually excellent podcast Who Shot Ya? when they reviewed this movie. Namely, the idea that giant monster movies became more violent and bloody when CGI took over as the main method of bringing monsters to life. That is patently false and I am shocked that crew did not know better.

Monster movies have been bloody since King Kong snapped a T-Rex's jaw and left it to bleed out back in 1933. Films intentionally aimed at children like Gamera vs. Viras and Godzilla vs. Gigan feature a staggering amount of monster and human violence.

Hell, need I remind you of how earlier in this very HubrisWeen a film forced us to watch a "dinosaur fight" that ended with a tegu actually bleeding to death on camera?

In the end, I won't try to pretend that Rampage is high art simply because it clears the incredibly low bar of being the best video game movie ever made. Nor will I even pretend it's one of the greatest giant monster movies ever made, though I would argue it deserves a significant amount of recognition within that subgenre.

Rampage knows exactly what it is and it sets out to give you an engaging and exciting spectacle, and it succeeds admirably. I absolutely love it and hope that its very positive box office means we'll be seeing a franchise after all.

And I don't say that just because I live near Chicago and it's fun to see giant monsters tearing my city up for a change.

This has concluded Day 18 of HubrisWeen 2018! To see what the other Celluloid Zeroes chose for R, click the banner above!
Posted by Random Deinonychus at 4:00 AM