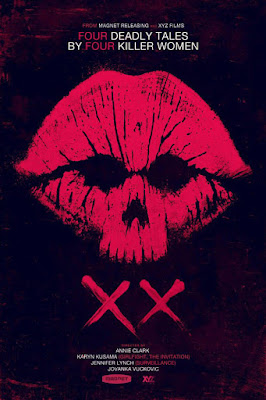 I've managed, almost totally by accident, to review multiple horror films by women for this year's HubrisWeen, but today's movie is the genuine mother lode: it's actually four horror movies directed by women.

Of course, while that sounds awesome on paper, it's still an anthology film. If you've run afoul of enough anthology films, you know that that means you're lucky if the majority of the stories are any damn good and you're just about guaranteed that one of them is going to suck. It's a truly rare thing to encounter an anthology film that has all of its segments be good.

Sadly, XX is not that rare film. However, that isn't as damning as it sounds.

Most anthology films have some kind of wraparound story, but this film goes for the rather unsettling adventures of a living doll house wandering around a seemingly deserted building. It makes for some arresting visuals, via some unsettling stop motion and time lapse animation, but it doesn't really add much. It does give us something to look at between segments, though.
Our first tale is "The Box", based on the short story by Jack Ketchum--making it the only one of the segments that is explicitly adapted from a pre-existing work.

Susan (Natalie Brown) is taking the train home from some pre-Christmas festivities with her son Danny (Peter DaCunha) and daughter Jenny (Peyton Kennedy). Susan, our occasional narrator, mentions that Christmas was foremost in the minds of her children, which is most likely why Danny becomes fixated on a strange man (Michael Dyson) seated beside them with a box on his lap.

Despite Susan telling him to stop, Danny asks the man what the box is. The man assures Susan it's all right, then tells Danny, "It's a gift." He also lets Danny peek inside--and the boy goes eerily silent. When Jenny asks what was inside, he just tells her it was "nothing."

Things only get weirder from there, as Danny oddly says he is not hungry when they join his father, Robert (Jonathan Watton), for dinner. That's not so unusual--except Danny refuses to eat for the next four days, claiming he simply isn't hungry.

Robert gets worried first and Susan takes Danny to the hospital, but the doctor can't find anything wrong with the boy and asks his parents to keep them updated. However, Susan catches Danny telling something to Jenny that evening, which he refuses to repeat to her.

Except, the next day Jenny is also suddenly "not hungry"...

Okay, I'm getting ahead of myself here, but the next segment is my favorite of the film: "The Birthday Party." It's also totally unlike the other three stories, since it isn't actually a horror story, per se, but more of a dark comedy--and it marks the directorial debut of its director: Annie Clark, better known as singer St. Vincent.

Poor Mary (Melanie Lynskey) is having a devil of a time getting her house ready for her daughter Lucy's (Sanai Victoria) seventh birthday party. Her weird housekeeper/nanny Carla (Sheila Vand) nearly gives her a heart attack when she appears out of nowhere to give her a mug of coffee. Even odder, Carla claims that she saw Mary's husband's car in the drive, but Mary protests he is still supposed to be on a business trip.

Well, she's quickly going to wish that that was the case, because she is shocked to find her husband, David (Seth Duhame) in his office. She's even more shocked to discover that he's dead, apparently a result of taking some of his medication with alcohol.

However, Mary is bound and determined that nothing is going to ruin her daughter's party, so her only choice is to try and hide the body. That's easier said than done, however, because the party is starting in less than half an hour...

Our next story is "Don't Fall" and calling it slight would be an understatement. I can literally sum it up in its entirety as follows:

Four friends go hiking, find an ominous cave painting, and when Gretchen (Breeda Wool) scratches her hand she becomes possessed by a demon and kills the other three.

That's it. That's all there is to it. About all that I can say for it is that it seems to imply that the two women in the quartet are a couple, but it never really makes it clear and it ultimately doesn't matter.

Our final segment, "Her Only Living Son," has a very interesting premise in that it's an unofficial sequel to Rosemary's Baby. Unfortunately, it really has no idea what to do with it.

Cora (Christina Kirk) has been trying to hide her son, Andy (Kyle Allen), from his estranged actor father for years but the lad is now turning eighteen. Worse, he is showing horrifically sadistic tendencies while having the people around him totally wrapped around his little finger.

Well, that's because the actor wasn't his actual father, and Andy's daddy intends to collect his spawn before his birthday is over...

To sum up XX as a whole, it must be said that the first two stories are its strongest. That's really too bad, of course, since it means that all the best stuff comes in its first half.

"The Box" is a really chilling, low-key horror story. It does require some patience, however, because it's a story that sets up a burning question and the whole point is that you can't get the answer. This is a story of existential dread and the horrors of the unknown. It cheats a little bit by using a dream sequence to inject a bit of bloody horror in a story that really didn't call for it, but I can excuse that as a means of keeping the viewer off-balance.

"The Birthday Party" is just delightful and hilarious, a pitch-perfect bit of dark comedy that builds to one of the greatest visual punchlines I've seen in quite a while. I don't mean to disparage the other segments, but if you were to turn the film off as soon as the dollhouse showed up again after said punchline, you wouldn't need to feel like you were missing anything.

It's not that "Don't Fall" is bad, mind you, but it's basically just a very average "spam in a cabin" style of story--or "spam in a camper," in this case--that's been squashed into an even shorter run time. It's ultimately just kind of bland, as a result. The creature design is pretty good, though.

If I'm brutally honest, though, "Her Only Living Son" is the film's worst segment. The premise is actually really good, but it's wasted on a story that is severely front-loaded with set-up and then just abruptly ends in such a way as to suggest that they had reached the allotted time for the segment and needed to wrap it up quickly.

A bad anthology segment is bad enough, but a bad segment with a really promising premise is so much worse.

In the end, I think that XX is worth watching. However, I definitely recommend going in with your expectations significantly lowered. With the right mindset, it's possible that even its weakest segments might surprise you.

Welcome to the Day Twenty-Four of Hubri5Ween 2017, the fifth year of this nonsense! Click the banner above to see what everyone else did for X!
Posted by Random Deinonychus at 6:00 AM