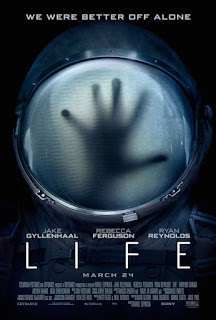 It's not unusual for an official sequel (or prequel, as the case may be) to a famous film and a clear rip-off of that same film to come out in the same year. After all, when studio executives see something that works, they want more of that exact same thing in any way they can get it. Amazingly, this remains true even when the film everybody wants more of came out nearly 40 years earlier.

And so it was that 2017 gave us both Alien: Covenant and today's film, Life.

Of course, whenever a sequel and a knock-off go up against each other, it's natural to be extremely curious as to which of them will be better. Indeed, oftentimes it's about far more than that--there's a curiosity to see which film does a better job of following in the footsteps of the original.

Well, it wasn't exactly a hard task but I am happy to say that Life makes for a far better Alien "prequel" than the one we actually got. God knows I would have hated having two watch two films painfully fail at that.

That is, unless we're talking The Bye-Bye Man levels of failure, of course.

We open as the International Space Station crew prepares to receive an incoming probe carrying soil samples from Mars. Samples that have clearly already been determined to contain life, based on how eager they are to catch it when it turns out to have gone off course--and the fact that the ISS usually doesn't contain a representative from the CDC, to my knowledge.

Said representative is Dr. Miranda North (Rebecca Ferguson), whose main responsibility is setting up various "firewalls" for the crew to maintain in order to keep whatever specimens they find safely quarantined. The job of studying the specimens falls to Dr. Hugh Derry (Ariyon Bakare), an exobiologist. It's worth noting that Hugh has been wheelchair-bound since he was a child and thus welcomes the freedom that zero-gravity has allowed him.

While Mission Commander Ekaterina Golovkina (Olga Dihovichnaya), systems engineer Sho Murakami (Hiroyuki Sanada), and medical officer Dr. David Jordan (Jake Gyllenhaal) watch closely, the ISS's flight engineer Rory Adams (Ryan Reynolds) goes EVA to control the station's arm and manages to catch the probe. Hugh quickly determines one of the specimens contains a unique single-celled organism and before you know it, an elementary school in America has been granted the honor of naming it.

Your nightmarish, flesh-eating extraterrestrial for this evening will be named "Calvin."

Calvin is a very curious creature, indeed. Once Hugh manages to find the right atmosphere to wake it up, the creature quickly reveals itself to actually be a multi-cellular organism where each cell is able to perform any task the creature as a whole needs. What's more, it seems to be aware of its surroundings and even extends a friendly pseudopod to explore Hugh's gloved hand inside the quarantine box.

However, its rapid growth makes Miranda nervous. So she's almost relieved when Hugh forgets to check a clamp in the lab and a leak in the box causes Calvin to go dormant. However, they can't exactly give up that easily on the first verifiable case of alien life. Hugh's solution is to use a small electric rod to shock the creature back to life.

This is both a good idea and a really shit one. It's good in that it works, bad in that Calvin wakes up pissed.

Now both looking like and moving like a cartoon starfish that snapped and went homicidal, Calvin snaps the electrical rod in two and then begins breaking all the bones in Hugh's hand until he passes out. Miranda has to fight with the others to maintain the quarantine, especially when Calvin figures out that the rod has a sharp point and the gloves can be broken with this point. Upon seeing the creature make its way into the cage with a rat and devour it in seconds, Rory impulsively breaks the quarantine.

On the plus side, Hugh is safe. On the downside, Calvin latched onto Rory's leg and he can't leave quarantine until that's resolved. Luckily, the lab has both "oxygen candles" and a flamethrower to use against the little fiend--and Golovkina gives Rory clearance to kill it.

Now, despite a flamethrower seeming like a very, very bad idea inside a pressured oxygen environment, Rory does his damnedest to incinerate the little monster. Unfortunately, it just won't burn and he quickly runs out of fuel with nothing to show for it.

And then Calvin forces his way into Rory's mouth and down his throat. The globs of blood that keep floating out of Rory's mouth as a result of this seem like a pretty bad sign, even before his vitals flatline on the station's monitor.

Unfortunately, the flamethrower's pilot light manages to set off a CO2 sprinkler fire suppression system. Calvin emerges from Rory's body, much larger than before, and it clearly has figured out that the sprinkler vents are a way out. Because the vent system is so poorly designed that it has to be turned off vent by vent in order to seal the lab again, the creature escapes into the station.

And, as luck would have it, their communications go down shortly after--cutting off a distress call they were busy sending. So Golovkina goes EVA to fix the communication array, only to discover that the issue is that the equipment has overheated due to a coolant loss. And when she opens a valve to check she discovers why: Calvin has been feeding on the coolant and it leaps out and latches onto her suit. Somehow the creature is able to survive in the vacuum, which Hugh hypothesizes is because the creature somehow stored oxygen--basically it's holding its breath.

Golovkina is able to close the valve again, but the plan to get her back to the airlock and then remove Calvin goes seriously FUBAR when the tentacled creature somehow damages her spacesuit's coolant pump and she finds her helmet flooding with toxic liquid. David is almost able to get the poor woman back inside when she finds a moment of clarity in her panic and deliberately locks the airlock door and allows herself to drift away rather than risk Calvin getting back inside.

Man, drowning in outer space has got to be one of the most horrifying ways to go that I can think of.

Unfortunately, Calvin is smart enough to figure out to leap back onto the ISS hull. Worse, it has a way in via the thrusters. Sure, Sho can read a change in the thruster temperature and then burn the creature back out each time it tries to get in, and he does. However, just firing thrusters in orbit is a bad idea and soon the ISS is entering a decaying orbit. The crew find themselves forced to choose between using the last of their fuel to avoid burning up on re-entry or letting Calvin get back into the station.

Given that they can't risk Calvin getting to Earth, they clearly have no choice but to let the creature back in and try to eradicate it. Of course, Calvin is not going to make that easy for them, since not only has the creature grown much bigger and changed into a form that resembles more of a squid crossed with a stingray, it's also distressingly smart and nigh indestructible...

I can't say there are genuinely very many surprises left in Life past this point. It's hardly to the point that you'll guess every single development but you also won't be terribly shocked, even when the film expects you to be.

That said, I went into the film with, well, mediocre expectations. So naturally I was pleasantly surprised when the movie turned out to be good. Not great, mind you, but I was expecting utterly disposable trash that wasted a great premise and, instead, I got a very enjoyable film that mostly succeeds in living up to the excellence of its core premise.

Oh, there are definitely some points where it fails. For one, for all that it tries to be a monster movie rooted in science, the film also occasionally just abandons that science totally in ways that make little or no sense. Not just in the fact that it should be plainly obvious using a flamethrower aboard the ISS would be a disaster, but also in the biology of Calvin.

For one thing, Calvin is revealed to be a creature made up of cells that can perform any function as needed. This would seem to be setting up the fact that such a creature could easily regenerate into several more creatures from a single stray cell--but it never does. Also, we are clearly shown that it can survive in space but the plan for killing it revolves around the assumption that it is susceptible to oxygen deprivation?

However, in a way that just adds to the film's charm. There's a lot of this movie that reminds me of science fiction films in the 1950s. In fact, part of the film's ending involves a character recording a warning for Earth to avoid Martian lifeforms, which is almost identical to the speech that ends It! The Terror From Beyond Space about humans needing to bypass Mars and its fearsome native life.

The cast is also excellent, with nobody making the blatant choice to not give a shit about their performance in a monster movie. And the characters are likable enough, to the point that you may not cry over their deaths, but you definitely don't want to see them be killed.

It would be a stretch to call Life a "great" film, but it's a highly enjoyable creature feature. And, really, sometimes that's all you can really ask out of, er, life.

Welcome to the Day Twelve of Hubri5Ween 2017, the fifth year of this nonsense! Click the banner above to see what everyone else did for L!
Posted by Random Deinonychus at 6:00 AM