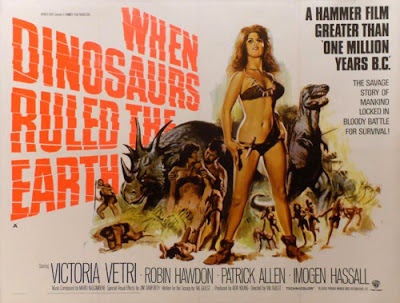 Let's get one thing straight right off the bat: even for a cavemen & dinosaurs flick, today's movie is stupid. Yes, it's even stupider than One Million Years B.C. because at least that film didn't try to sell us on its events taking place during a geological event that happened long before any animals lived on Earth.

That film also got made before the homophobic president of Hammer Studios decided that therapods like Allosaurus, Ceratosaurus, and Tyrannosaurus Rex shouldn't be featured in a dinosaur movie because he felt that they walked like gay men. Yes, really.

So despite said dinosaurs being wildly popular--and one plainly being featured on the poster I'm using for this review--we won't see a single one in this film. However, that's not really as big a negative as it sounds because such a restriction forced the filmmakers to think a bit outside the box on this one for the dinosaurs they chose.

However, yes, I am still going to mark the fact that this story takes place during the formation of Earth's moon as a negative.

When we open, we find ourselves amongst a tribe where blondes are considered the only suitable sacrifices for the sun god. We start with three reluctant potential sacrifices, but before the priests can choose the one to be sacrificed, one of them panics and manages to throw herself and one of the priests off the cliff to their deaths. This is apparently not good enough, however, so the ritual of choosing continues.

However, luckily for Sanna (Victoria Vetri), something strange begins to form in the sky and during the resultant windstorm, she is able to escape off the cliff into the ocean. She is rescued by a passing raft from another tribe, when Tara (Robin Hawdon) sees her. Of course, as movies have always taught us, cavemen prefer blondes--which means when the raft returns, Tara suddenly spurns the advances of Ayak (Imogen Hassall) in favor of Sanna.

Before the drama of that really has time to take hold, the Elasmosaurus that the tribe was trying to capture breaks free and goes on a rampage through their village before it is finally killed by oil and fire. And here I'm about to say something heretical: even at this point in the film it's clear that Jim Danforth's stop motion dinosaurs are way better than Harryhausen's were.

Now, I don't know what factors contributed to this. Either the budget for this entry was higher, there was more time to put the effects together, or the models were just better constructed. However, every dinosaur in this film is vividly alive and mark some of the most convincing dinosaurs ever put on film. Even the ones that don't hold up as well still look great.

Well, naturally, Ayak's jealousy of Sanna eventually spurns a fight in the surf. Ayak waits until Tara has gone fishing to try and accuse Sanna of stealing the necklace and knife he gave to her. However, the tribal elders take Sanna's side in the disagreement, which just makes her all the madder.

You better believe when representatives from Sanna's tribe show up, Ayak is all too eager to point them toward her hut. However, Sanna is able to escape into the jungle. The tribesmen who follow end up losing one man to a large python that Sanna manages to elude and then they find a cave they assume she is hiding in. Unfortunately, inside the cave is one pissed off Chasmosaurus that kills all but one of them--and he's left severely wounded.

Tara returns and hears where Sanna went from Ayak, who seems to think that will make him just forget the blonde. Instead, he rushes off to find her. Tara does succeed in rescuing the wounded man and luring the Chasmosaurus off of a cliff, but he tragically finds Sanna's blonde hair in the jaws of a carnivorous plant and takes it back as proof of her death.

Naturally, we already know that she had tried to hide from some stock footage from The Lost World and accidentally got her hair grabbed by said plant. She cut it off in order to escape, and then managed to find herself adopted by a carnivorous dinosaur that found her in its nest along with one of its actual babies.

The species of dinosaur is totally bogus, since it's a quadrupedal carnivore that owes more than a little to the Rhedosaurus. Still, it behaves a lot like a big lizard so I'm going to go ahead and just call it an oversized Megalania to save myself some time.

Tara never quite gets over Sanna, but he still tries to just move on with life. Sanna, meanwhile, spends much of her time frolicking with and training her new family. She manages to avoid being seen, until fate manages to not only get her spotted by someone from her tribe but also to reunite her with Tara.

Sanna's tribesman spots her after he has some uncomfortably rapey sex with a woman (a scene cut from the original US edition) up on a cliff, and then he sees her leading the Megalania across the desert below. Tara manages to reunite with her after he is carried off by the best Rhamphorhynchus ever put to film. (Not that it has very stiff competition there) After killing the beast (noooo!) he runs right into Sanna and the Megalania, naturally shocked to find the lizard is her friend.

Their loving and passionate reunion (also trimmed down by the US distributors on account of exposed T&A) is obviously not very fated to end well. When Tara returns to his tribe, the other tribe is there, too. Since Tara is obviously in cahoots with Sanna to piss off the sun god, he is put on a raft to be sacrificed to a hungry Mosasaur.

However, even if he survives that the cavemen at the heart of our story are all going to have a much bigger problem. The moon is finally finished forming, and its creation means a horrifying cataclysm is about to strike...

In addition to the superior quality of the dinosaur effects, another aspect of When Dinosaurs Ruled The Earth that I like a lot better than the film it's cashing in on has to do with its cavemen storyline. Namely, I can actually understand what the hell is going on with it.

This film also utilizes the fake caveman language, but it does so in a much better fashion. Midway through the movie you actually begin to feel like you understand what each word means, or at least well enough to fake it. As a result the characters feel much more realized and you actually care what happens to them.

Now, of course, this doesn't mean it's a great movie. It's still based around a totally ridiculous story that thumbs its nose as grade school level science, after all. However, if you can look past that--and you really, really need to be able to if you're going to watch this--it's a very entertaining and engaging romp.

And no, I don't just like this film more because it has actual nudity in it. It's the Rhamphorhynchus that truly panders to me!

Welcome to the Day Twenty-Three of Hubri5Ween 2017, the fifth year of this nonsense! Click the banner above to see what everyone else did for W!
Posted by Random Deinonychus at 6:00 AM