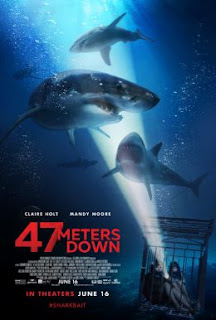 While there are obviously many important elements involved in making a movie "good," a truly great premise is one of the best elements to work from. It doesn't have to be an original premise or even especially unique, as long as it's solid.

Two people on shark-cage diving when the cage sinks to the ocean floor? That is a real humdinger of a premise. You've got built-in antagonists via the sharks, plus the myriad of dangers that result from being trapped that far underwater.

Unfortunately, even a great premise does not automatically make for a good movie. And make no mistake, 47 Meters Down is not a good movie.

I had a bad feeling when the film introduces us to its two sister heroines when Lisa (Mandy Moore) is knocked off of her floating lounge chair in a pool by Kate (Claire Holt), and we see Lisa's glass of red wine billowing in the water significantly. I'd make an "auteur" joke here, but given the title appears to us as "Johannes Roberts' 47 Meters Down," the movie already made the joke for me.

Even less promising is that when Lisa leaves the pool to go call her boyfriend who didn't join them on the vacation, Kate calls out, "Nice ass," to her. Now, I can only speak to the sisters I have known in my own life, but I haven't known any who would loudly shout out a compliment to each other's asses across a crowded pool.

At any rate, Lisa soon confesses to Kate that her boyfriend actually broke up with her and the only contact they've been having has revolved around texting him the plans for removing his stuff from the apartment. Lisa claims he left her because she was "boring," so Kate decides this means that they need to prove to her ex that she is not, in fact, boring.

The first step is going out that evening. As if to hammer the point home, Lisa is incredulous that anything would still be open past midnight in a Mexican tourist trap. However, a night of drinks and meeting two handsome locals is just the beginning, because said locals know of a cage-diving tour run by American ex-pat, Captain Taylor (Matthew Modine). And before you know it, Kate is convincing Lisa that no boring girlfriend would ever go cage-diving.

Captain Taylor looks rather scuzzy, but he seems to be a decent fellow so Lisa begrudgingly agrees to go along with the plan. It's rather a shame, since Matthew Modine seems to be trying his best to have fun with the character and I bet he'd be so much more fun as a straight-up villain.

At any rate, Lisa tries to calm her nerves by wondering aloud to Kate if her ass looks good in the wetsuit.  Again, actual dialogue that happens in this movie, folks.

It isn't long before CGI great white sharks are swarming around the boat and the diving part of the tour begins. Presumably for safety reasons, only two divers are sent down at a time so the two guys who turned them onto the tour in the first place take the first turn. Their dive goes just fine, but when it's the girls' turn things start to rather quickly go awry.

First, Kate borrowed a camera from one of the guys and she manages to drop it through the bottom of the cage, where it is immediately eaten by a shark.

Secondly, Lisa starts to panic. When Kate radios the boat to pull them up, the winch chooses that moment to break.

The sequence of the cage plunging to the ocean floor should be gripping and suspenseful, but through a combination of poor CGI and being edited together without enough sense of panic...well, it comes off as more silly than anything else.

At any rate, the two find themselves trapped 47 meters below the surface with their air rapidly running out. Worse, they're so deep that they risk getting the bends if they try to swim to the surface and the boat's radio is just out of range.

Well, it's out of range unless they swim out of the cage and several meters closer to the surface. Kate does just that in order to contact the boat, which involves her having to squeeze through the bars without her tank or mask because the broken winch fell on the cage door.

Of course, leaving the cage means exposing themselves to the sharks that are still hanging around. Luckily for Kate, the shark that takes an interest in her narrowly misses. However, another shark tries to get at them in the cage and succeeds in bending the bars before it loses interest. So, yeah, they're in a bad spot and the fact that Captain Taylor assured them that his first mate was coming down with a spare winch is small comfort.

Well, naturally, this first rescue attempt fails and it does so pretty spectacularly. The first mate manages to get himself eaten and, following his flashlight to find him, Lisa nearly suffers the same fate. She does manage to get back to the cage with the spare winch cable--but her fears that it seems to weak are justified when it frays upon them being lifted almost to the surface and sends them hurtling back down.

Now Lisa's leg is pinned under the cage and their oxygen is running out. When Kate once again risks swimming higher to reach Captain Taylor on the radio, he tells her that the Coast Guard is on the way with rescue divers and he will be sending down two spare oxygen tanks. Now, Taylor points out that he had a good reason for not doing so earlier: nitrogen narcosis. The longer they are down there, the more likely they will suffer its effects, which include hallucinations and erratic behavior.

Just what you need when you're surrounded by sharks, eh?

And, frankly, this is where I found myself most disappointed by the film because it sets this up and then pays it off...but then seems to lack the conviction to do so properly.

See, Kate goes to recover the tanks, since they land several meters from the cage. She dodges one shark attack, but the second one seems to get her--leaving the spare tank just out of Lisa's reach. Lisa, desperate for air, manages to get it by using the spear and line from the deceased first mate's spear gun to drag it to the cage. She changes the tank...

...and then she hears her sister on the radio. She's surrounded by sharks and wounded, but Lisa bravely frees her leg and goes to rescue her sister. Using flares that were included with the spare tanks, she manages to fend off the sharks surrounding them in a physically impossible manner until they can safely decompress.

Unfortunately, as they are within inches of safety and the boat, a shark grabs Lisa by the leg. However, she manages to fight it off and climbs aboard the boat. Lisa happily embraces her sister, but then notices her wounded hand is billowing blood into the air as if she were still underwater...

That's right, it's the old An Occurrence at Owl Creek Bridge twist. Unfortunately, it's done without any sense of why that twist worked, because shortly the Coast Guard divers come and rescue Lisa. Sure, it's sad that her sister got eaten, but--that twist doesn't really work with a "happy"ending. Considering this almost got dumped straight to DVD before The Shallows turned out to be a huge hit, one wonders why they gave it an ending that feels like it was the product of test audiences and focus groups.

Of course, it should be obvious that 47 Meters Down has nothing on The Shallows as far as quality. I won't spend the rest of this review comparing them, however. The two films are, after all, quite different aside from the basic premise of a white woman (or women) on vacation in Mexico being trapped in a life or death struggle involving great white sharks.

For one thing, there's no show-stealing sea gull in this one.

No, 47 Meters Down owes a lot more to Open Water, which--to my great amusement--has a sequel called Open Water 3: Cage Dive that actually played before this movie on the DVD copy I watched. I haven't watched any of the sequels so I can't speak to them, but Open Water had a budget much lower than this one and no name stars in its cast. The sharks it used were real, as opposed to mediocre CGI creations, and it told a much more straightforward story.

It was also a much better film than this one.

That's not even to say that 47 Meters Down is a terrible film, since it really isn't. It's actually something far more frustrating: it's blandly bad. If I were to grade films, this would probably be C-level work at best. It's technically competent, the acting is fine, and aside from some truly awkward dialogue the script is fine.

And yet, it never engages and it barely even entertains. It's never quite full-on boring, but it certainly teeters on the edge. It's a real shame, too, because I wanted to give this movie a chance and I wanted to really like it--especially when it pulled that twist ending.

However, this film just simply isn't good. It's not quite bad enough for me to wish I had those 85 minutes back, but you better believe I would have preferred to spend them in the time of a better movie.

Welcome to the Day Six of Hubri5Ween 2017, the fifth year of this nonsense! Click the banner above to see what everyone else did for F!
Posted by Random Deinonychus at 6:00 AM