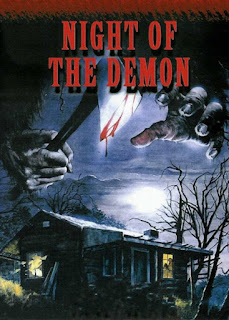 Imagine for a moment that Bigfoot is real--though statistically at least some of you reading this probably already believe he is. Now imagine that Bigfoot is a massive, perpetually grouchy asshole.

That's essentially the core conceit of Night of The Demon.

Hell, based on the many, many flashbacks to stories about deadly encounters with Bigfoot in this film, you begin to wonder how anybody has ever come out of the film's setting alive.

Really, flashbacks are the name of the game in this film as we open in a hospital where anthropology professor Bill Nugent (Michael Cutt) has been taken after he was found in the woods. His face is bandaged because it was badly burned, but the doctor caring for him has determined that he is well enough to tell his incredible story to the police. See, Nugent didn't go into the woods alone and the cops would like to know exactly what happened to the students who all followed him out there.

Well, as Nugent tells them, the inciting incident was the death of a man on a fishing trip. So our first flashback is Nugent relating an event he was not present for, which won't be the first time. At any rate, the man was minding his own business at his campsite when a red-ringed POV cam snuck up on him. (Note that, per this film, Bigfoot has an appalling case of tunnel vision) In shadow we see a hairy figure yank his arm out by the roots, and then the poor man's blood fills in a footprint next to his body--which is a genuinely cool shot.

Well, the daughter of the fisherman joins Nugent's class later, since for some reason Nugent's curriculum is currently focused on Bigfoot and specifically cases where people have been killed or gone missing after encountering the beast. (Also, don't ask me to try and figure out which students are which because I almost immediately gave up trying) Nugent is planning to go camping with the students, something his poor wife is not too keen on, in order to find the truth of the matter.

This involves many shared "hey, did you hear about this story" flashbacks over the course of the film. You'll see a couple be interrupted in the middle of sex when Bigfoot kills the man, Bigfoot casually axe murder a guy who really overacts his death scene, Bigfoot effectively force two girl scouts to knife each other to death by swinging them into each other, and the film's notorious highlight--a biker getting his dick torn out by the roots when he stops to take a leak by the roadside.

If that's not enough, when the group is settling down for the first night, we watch a totally unrelated camper get killed when Bigfoot finds his sleeping bag and then swings him around above his head before launching him onto a pointy tree branch. It is glorious, and rivals the sheer delight of the goofy sleeping bag kill in Prophecy.

At any rate, Nugent did have a plan to first visit a man who had talked to the police about Bigfoot, but that guy is suddenly mum. However, he does let slip about someone deep in the woods named "Crazy Wanda." Asking around in town, the heroes learn that Wanda was the daughter of some backwoods religious fanatic who ended up burning himself alive after his daughter gave birth to a deformed child. Wanda sure sounds like someone worth talking to...

Finding Wanda requires taking their boat deep into the woods. That night Nugent and another student witness some bizarre cult engaged in a ritual that involves a man preparing to have sex with a woman before an effigy of Bigfoot. Taking the woman's participation in the ceremony to be nonconsensual, Nugent fires into the air to scare off the would-be rapists. This succeeds in one of them accidentally setting the Bigfoot effigy on fire, but Nugent shrugs off the concern that it could start a forest fire.

Unfortunately, Bigfoot apparently doesn't approve of Nugent's half-assed heroism. (Note that he assumed he just stopped a rape, but did nothing to ensure the victim was actually okay) For in the morning they discover that their boat--which contained supplies and back-up ammunition--has been untied and floated off. The footprints at the scene are unmistakable and they make a cast of one.

Alas, by the time they find Wanda (Melanie Graham) in her cabin, Bigfoot has already clawed the back of one of the students when he came upon two of them having sex. Wanda is no help as she seems catatonic, and Nugent realizes she was the woman they "rescued" from the cult earlier. Worse, when one of the students shows her the Bigfoot cast to try and get her to talk, she breaks out of her reverie and smashes it.

Deciding to camp outside of Wanda's cabin proves a poor idea when one of the students wanders to far from camp and Bigfoot bashes his head against a tree and carries his body off. Nugent decides the best way to get answers is to hypnotize Wanda. He's right, in that they learn that her father cast her out of the house when she was 17 after he saw her being romantic with another young man. However, he chose a poor night to do so, as Bigfoot found her and--in a break from his pattern up until now--he decided to rape her instead of killing her.

Her father did nothing but wail in anguish as he watched her be attacked, only shooting at the beast once it was finished. However, he did apparently try--and fail--to poison the baby out of Wanda before it was born, assuming it to be a demon spawn. However, the baby was born and when he beheld its poorly made visage he murdered it and buried it outside the cabin. Wanda also reveals that she actually burned her father alive in revenge for murdering her baby.

Nugent decides to dig up the grave and discovers what appears to be a deer skull (?!) in the coffin, which is apparently proof that the baby was half-Bigfoot. He decides this must mean that Bigfoot was desperate to further his species since he knew he was the last, and thus chose Wanda as his mate. Never mind that Bigfoot comes calling on the cabin now and, despite there being several women he could choose from to further his species, he opts to go for "murder everyone but Wanda."

I suppose the women might be grateful for that, if they weren't too busy dying horribly.

Naturally, Nugent somehow survives after Bigfoot smashes his face onto a hot stove. Did you know that having your face burned off causes you to sprout novelty vampire fangs? Well, now you do!

Back in the hospital, the cops decide that Nugent is simply criminally insane and that's that. I mean, why bother looking into such a clearly crazy story? The End.

There's really no way of arguing that Night of the Demon is a good movie. Technically competent, sure, and definitely entertaining--but that doesn't automatically make it good.

For one thing, the acting is uniformly awful. I really can't think of any performance that rises above "minimally competent," but most are simply bad. For another, while the film manages to somehow balance flashbacks within flashbacks, its story is still rather nonsensical. Note that it sets up some kind of a Bigfoot cult, implied to be an offshoot of Wanda's father's religious group, and they appear in precisely that one scene with no further role in the story.

Yet, for all its many, many faults, this is a damn fun little movie. It moves along at a great clip and, silly as the frequent flashbacks are, they keep the film from being boring even during the long set-up. It also must be said that, for the most part, its Bigfoot suit is really good. We get a lot of good looks at it and it only looks painfully fake in a few of its shots.

The gore is also far from Tom Savini in quality, but damned if it doesn't give us lots of it.

Really, this is the sort of monster movie that is perfect for watching with a group of friends or at a high school sleepover. It's fun, violent, and sleazy in all the best ways--note that unlike most films of its era, the rape scene is actually not played for titillation--and it really is a hoot.

Shame that the version streaming on Amazon Prime is of such poor quality. True, this is the sort of film that was destined to always be presented in VHS quality, but it would be a treat and a half to see it get an HD release one day.

I mean, you can never have enough scenes of Bigfoot ripping a guy's ding-dong off in HD.

Welcome to Day Fourteen of Hubri5Ween 2017, the fifth year of this nonsense! Click the banner above to see what everyone else did for N!
Posted by Random Deinonychus at 6:00 AM