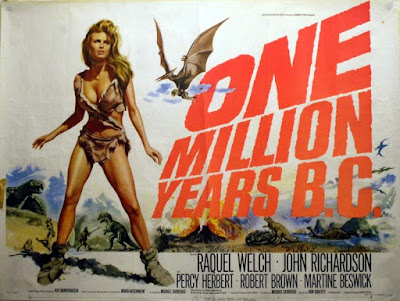 Humans and dinosaurs lived millions of years apart, and even by 1940 this was sure to be a well-known fact. However, pop culture does not require its entertainment to reflect reality, so I doubt anyone involved in One Million B.C. really gave a shit that their movie about cavemen fighting for survival against dinosaurs was utter bullshit.

If there's any doubt of that, consider that they also didn't give a shit that the "dinosaurs" in their movie were just lizards and alligators with stuff glued to them. (As we have seen elsewhere) I have never seen the film myself, but it is famous for both its animal cruelty and the fact that its "dinosaur" footage has been reused by countless films since its release.

In 1966, however, Hammer Studios decided to remake the film--but this time boasting the special effects of stop-motion maestro Ray Harryhausen. This time at least the audience would get some actual dinosaurs with their cavemen. Of course, while that was a great decision, what really put the remake on the map was putting relative newcomer Raquel Welch in a fur bikini.

And the rest, as they say, was total bullshit pretending to be history.

In fact, we open with a portentous narrator trying to set the scene for us of life one million years ago. He does so in the vaguest terms possible, however. He then introduces us to Akoba (Robert Brown), the leader of the stone tribe, as the man gets a warthog to chase him so it can be trapped in a pit. Then we are introduced to his sons Sakana (Percy Herbert) and Tumak (John Richardson), and the narrator promptly leaves us with, "And that is our story."

Actually, our story starts with Tumak winning the honor of wrestling and killing the now patently rubber warthog. However, while Sakana is still holding a grudge against Tumak, it actually is Akoba who decides to pick a fight with his son that night over a piece of the roasted boar and throws him off a cliff.

Tumak survives the fall but decides he would be better off elsewhere. Of course, given he nearly gets himself devoured by a giant iguana, runs afoul of vicious ape men, and narrowly avoids a giant tarantula--maybe he isn't better off on his own. Luckily, he staggers his way to the land of the shell tribe, where he finds Loana (Raquel Welch) spearfishing with a group of other women. He collapses and is almost run over by an Archelon--a giant sea turtle--on its way to the sea. Luckily, Loana gets him out of the way in time while her fellow tribesmen annoy the poor turtle a bit with their spears.

The shell tribe welcome Tumak, even though he's kind of a dick, and try to teach him how to spearfish. There's a vague hint of a love triangle between Tumak, Loana, and Ahot (Jean Wladon) but it sure looks more like Ahot would like to make their relationship into a trio if you ask me.

However, Tumak's time with the shell tribe is cut hilariously short. A rather puny Allosaurus, presumably a juvenile, appears and attacks the tribe. As the shell people flee to their cave, leaving behind the man the dinosaur catches first, Tumak springs into action and his heroism means that only one other tribe member is killed before the beast is put down for good.

Yet, Tumak manages to almost immediately piss away the good will he earned by being the hero. During the funeral for one of the slain men, Tumak decides to try and steal another tribesman's spear and Ahot catches him. After the two fight, Tumak is banished from the tribe--but Loana agrees to go with him.

Tumak and Loana together prove almost as incompetent as Tumak alone. After nearly getting caught by the ape men, they manage to blunder right into a Triceratops and piss it off. Worse, it chases them into a Ceratosaurus. Luckily for the two humans, the dinosaurs forget all about them and decide to fight it out.

Tragically, the Ceratosaurus loses. However, Loana and Tumak end up in Tumak's tribe and...

Look, I'll be honest with you, I kind of stopped caring what happens after this point. Oh, it's not that what follows is boring, exactly. I mean there's still a cat fight between Loana and Nupondi (Martine Beswick), as well as the famous sequence of Loana being carried off by a Pteranodon with bat wings. However, it simply must be said that this film does not do a good job of properly establishing its stakes and making you care about its characters.

So from this point on it's petty caveman squabbling until the volcano finally erupts and kills most of the cast.

Part of the problem, of course, is that the film uses a "caveman" language for its characters. This means that most of what they are saying is nonsense, but other movies have done this and been more successful at it. This film basically just tries to have its characters grunt and mime at each other and it's only occasionally successful.

However, this doesn't mean that the movie is bad, but it does mean that any scene in which Ray Harryhuasen dinosaurs aren't on screen can vary from "okay" to bordering on tedious.

Some of this may be because this is one of the few movies of this type I was not able to watch until I was well into adulthood. A movie like this is also going to do best when viewed at such an age that the viewer is primed to absorb it into nostalgia. However, I saw it well into my 20s and found it to be much less fun than I had predicted based on the trailer I had seen many, many times as a child.

If you're coming to this film for the dinosaurs, however, you will not be disappointed. It's rather clear that this was one of the lower budgets that Harryhausen had worked with, given the usual melodramatic stop-motion monster death scenes here are just "dinosaur falls over and breathes heavily until it stops." Yet even with that obvious handicap, Harryhausen does his usual exceptional job of bringing life to the prehistoric beasts of the film.

If you're willing to be patient with the film through its slower moments, it can be pretty rewarding. I would have to say I can't rank it as one of Harryhausen's best, and in fact--as we'll see in a few more days--I actually prefer a different Hammer-produced "cavemen and dinosaurs" movie to this one.

Still, there are far too few films that feature Ceratosaurus, one of my top favorites, so I'm obligated to recommend this based on that alone.

Welcome to the Day Fifteen of Hubri5Ween 2017, the fifth year of this nonsense! Click the banner above to see what everyone else did for O!
Posted by Random Deinonychus at 6:00 AM