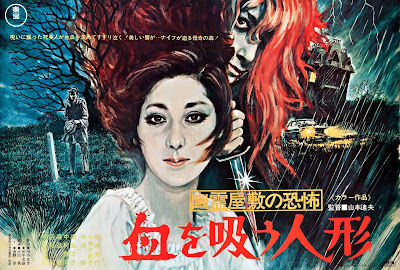 Thanks to the necessities of doing this all in reverse order, we finally come to the beginning of the Bloodthirsty Trilogy that would later give us Lake of Dracula and Evil of Dracula. Having watched this trilogy forwards and then backwards, I am delighted to say that this means we have saved the absolute best for last.

Sure, something about Evil of Dracula makes me call it my favorite, but this film is still superior.

One of the best parts of the film is that it manages to be so very familiar to Western horror fans, and yet so utterly alien to anything you expect to see in a vampire movie. It also takes some very clear cues from another Western horror movie that may not appear obvious at first glance, but it uses them to far better effect than mere imitation.

It's a dark and stormy night when a taxi deposits Kazuhiko Sagawa (Atsuo Nakamura) at an old house in the country, just barely out of the lashing rain. Kazuhiko has just returned from several months in America and is a bit concerned that his fiancee, Yuko, did not meet him at the train station despite his telegram. Naturally, the house belongs to her family and he decided to simply get directions to the place rather than waste time in town.

He's in for two nasty surprises in a row, however. First, the family's mute manservant, Genzo (Kaku Takashina, who would go on to play a similar role in Lake of Dracula), bizarrely attacks him once he is in the door. Luckily, Genzo is called off by Mrs. Shidu Nonomura (Yoko Minazake), his fiancee's mother. However, she then tells him that Yuko died a few days ago when her car was caught in a landslide.

To rub it in even further, Nonomura says her daughter called to Kazuhiko repeatedly on her death bed before she passed. Kazuhiko can hardly believe it, since Yuko (Yukiko Kobayashi, best known for her role as the heroine in Destroy All Monsters) was so full of life the last time he saw her--and she sure seems full of life when he finds her hiding in a wardrobe in the bedroom he was offered for the night. However, someone knocks Kazuhiko out before he can fully process what he is seeing.

Nomomura scoffs at his claim of seeing Yuko, saying again that her daughter is dead and they will go visit her grave in the morning. Kazuhiko isn't convinced, but he simply sits by the window of the bedroom and opens the gift he had brought for Yuko. It's some kind of ceramic doll and he drops it when he sees Yuko, clad in a flowing white nightgown, disappearing into the woods.

He follows her into the woods, finding himself at the site of her grave. Yuko is there, clear as day, but when he approaches her she begs him to kill her. Confused, he simply embraces the love of his life, assuring her it will all be okay. Which means Kazuhiko doesn't see that Yuko's eyes have taken on an inhuman appearance and a devious grin has crossed her face. He also doesn't see her raising a dagger in her bloodied right hand...

...and then Kazuhiko's sister, Keiko Sagawa (Kayo Matsuo) awakens from a nightmare in a cold sweat. She then answers the phone, relieved to hear it is her fiance, Hiroshi Takagi (Akira Nakao, who will be very familiar to Godzilla fans as he would later play prominent authority figures in Godzilla movies between 1992 and 2004, such as Commander Aso in Godzilla vs. Space Godzilla).

Hiroshi playfully chides her for still being asleep so late in the day on a Sunday, but Keiko tells him she had a terrible dream about Kazuhiko. She's very worried about him because he hasn't been heard from in eight days. She's tried calling the number he gave for Yuko's home, but that hasn't worked and she isn't sure if the lines might be down due to the recent storm. While Hiroshi would prefer Keiko not worry at all, he sees nothing for it but for them to take a drive out to Yuko's home.

As luck would have it, they stop for gas at the very station that Kazuhiko did when he asked for directions to the Nomomura home. The attendant doesn't recall seeing Kazuhiko coming back from the house, however, but he does tell Hiroshi and Keiko something he apparently neglected to mention to her brother--Yuko died recently in a car accident.

Mrs. Nomomura claims that Kazuhiko left four days earlier, but does not recall where he may have gone. While it is a frustrating dead end, the couple figure they ought to at least go to Yuko's grave to pay their respects. However, there is something odd about the grave site. Hiroshi notices that the dirt is soft as if it were recently disturbed--which is unusual in a region where cremation is the norm. Additionally, there are several dead crows nearby with their throats cut--and among their bodies is a very familiar-looking cuff link. Keiko immediately recognizes it as her brother's and Hiroshi observes that it is stained with blood.

Needing an excuse for the couple to stay longer and investigate, Hiroshi surreptitiously sabotages his car's drive belt. However, Mrs. Nomomura is sharp enough to keep the couple from looking too closely at things like the sound of a woman crying coming from behind the oddly heavy metal door to the basement--claiming it is merely the wind through a broken skylight.

Still, Keiko finds an unexpected clue when she finds the head of the doll she knows Kazuhiko brought for Yuko. It's good she found some solid evidence, since she is then suddenly confronted by Yuko in her bedroom and only escapes when Yuko recoils at the light from a lamp that Keiko knocks over. Even Hiroshi is skeptical of Keiko's claims, however.

Still, even Hiroshi can't deny the doll head when Keiko shows it to him the next morning. Feeling repentant for having been so quick to dismiss her the night before, Hiroshi suggests they go into town to investigate the Nomomura family.

Before long, the couple's investigations will lead them into a dark legacy of unsolved murder, cover-ups, the power of the will even after death, and what happens when you hypnotize someone at the moment of death. Worse, they'll put themselves right in the crosshairs of the vampire and the diabolical person pulling her strings...

I'm going to leave off there, fairly early in the narrative, because the rest of the film deserves to be seen fresh. Seriously, this film's reveals and climax are wonderfully deranged. It's nowhere near the level of bonkers as, say, the "rational explanation" in The Living Skeleton that actually makes less sense than if a ghost did it, but it is still a lot.

The atmosphere in this one is spectacular, but the film really shines due to its amazing cast. Although, while everyone is great in this one, the real standouts for my money are Kayo Matsuo and Yukiko Kobayashi.

If you've seen Destroy All Monsters, you may recall Yukiko Kobayashi did an amazing job with playing an innocent person who has found herself under the control of the evil alien Kilaaks. It isn't terribly shocking here that she is amazingly unsettling as Yuko, even though the contacts she has to wear were surely uncomfortable and most likely blinding. She also handles the switch back and forth from the vampire to the trapped soul of the innocent Yuko wonderfully.

Meanwhile, Kayo Matsuo is a perfect heroine as Keiko. While she is somewhat relegated to the background by the involvement of her fiance, she is still a very strong heroine and gets to do a lot of her own risk-taking and investigating. Matsuo is also an incredibly gorgeous woman that I confess to crushing on almost immediately--and I am ashamed to say I have seen her in nothing else so far.

I also have to commend Matsuo because she does the greatest expression of wide-eyed horror that I have probably ever seen, which really amps up the actual effectiveness of what's happening in the film.

Now, remember when I mentioned that this film rather surprisingly borrows from another famous Western horror film? Well, I was referring to Psycho. At first, it seems to only be borrowing the structure of introducing a character that seems to be the hero and then quickly killing him off so his sibling can investigate his disappearance. However, the film also later shamelessly steals the reveal of Norman Bates's mother.

Amazingly, though, those are the only aspects of the film that I can point to as having been borrowed from a more famous inspiration. (Although the method of preserving someone after death by hypnotism could well have been inspired by the segment "The Facts in the Case of M. Valdemar" from Tales of Terror) It's surprisingly rare to find a film that knows how to steal only a little bit in order to aid its original story.

While all three films are delightful, I can genuinely say that if you have not seen The Vampire Doll, then you are seriously missing out and need to rectify that at once. Especially with Arrow Video's amazing Blu-ray release, which deserves a lot of praise, as usual.

It would not be a stretch to say that this film is the best one I've reviewed for this year's HubrisWeen, and that is saying quite a lot!

This has concluded Day 22 of HubrisWeen 2018! To see what the other Celluloid Zeroes chose for V, click the banner above!
Posted by Random Deinonychus at 4:00 AM