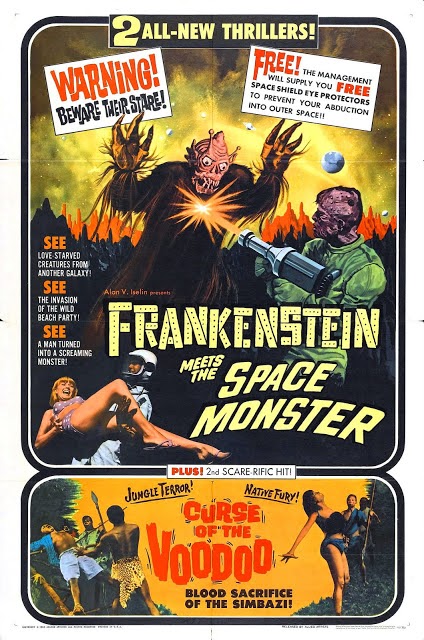 It's hard to say if there is a pop culture figure more misunderstood than Frankenstein. Show people a picture of Boris Karloff in box-headed make-up with bolts in his neck and ask them who he is. Did they say "Frankenstein"? Of course they did.

They're wrong, but after over a century--if not since the initial publication of Mary Shelley's original novel--they might as well be right. Most of you reading this probably know that Frankenstein was the mad scientist who created a monster in his lab, bringing dead flesh back to life and not the monster he created. However, by this point we might as well just give it up. The two are interchangeable now.

Slews of films that misidentified the monster would follow, like I Was A Teenage Frankenstein in which a dead teenager is brought back to life as a monster; and Toho Studios' glorious Frankenstein Conquers The World (known as the more honest Frankenstein vs. The Subterranean Monster Baragon in its native Japan), which chronicles how the Germans smuggled the heart of the Frankenstein monster to Hiroshima in the last days of WWII before the atom bomb there somehow allowed it to take form as a feral young man with regenerative powers who grows to 80 feet tall and fights the world's most adorable rampaging dinosaur. Which makes it the best adaptation of Shelley's story ever made. 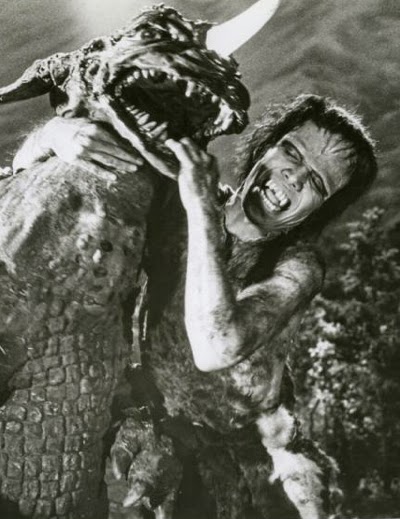 However, you have to admit that at least these films all contain an actual Frankenstein monster. That is not always the case. Usually it's because a distributor thinks a title with Frankenstein in it will lure more viewers, sometimes because it's a Godzilla movie released in Germany. You know the drill.

Today's film, however, did not alter its title with no regard to the film within. It isn't totally lying and saying we will be given a Frankenstein monster without ever making good on that promise. No, it gives us--to borrow the "affectionate" fan term for a certain American take on a famous radioactive reptile--FINO: Frankenstein In Name Only. Which, remarkably, is an accurate assessment regardless of whether you mean the scientist or the monster.

We begin aboard a Martian spaceship as it moves into Earth's orbit. Aboard the craft are a crew of bald, pointy-eared Martians and their gorgeous regent, Princess Marcuzan (Marilyn Hanold). The captain of this vessel is Dr. Nadir (Lou Cutell) and before we begin to describe the plot of the film, I must take a moment to describe Dr. Nadir:

Imagine, if you will, a Saturday Night Live-era Jon Lovitz dressed up in make-up to look like "Bat Boy" in an outfit that appears borrowed from Liberace's goth phase and delivering every line as if he was "ACT-TING!" It is glorious.

The Martians have come to Earth, as usual, to get our women. Seems that their planet has been devastated, equally as usual, by atomic war--leaving them with no women of their own, aside from Princess Marcuzan. Obviously Marcuzan is not sufficient to repopulate the planet, even if she wanted to try, so the best option is to go to the nearest planet with suitable humanoid females to steal.

However, the Martians are shocked when a rocket fired from Earth approaches their position. That their sensors detect that the rocket has a living occupant is no matter to them. Clearly this is a weapon launched by Earth and Nadir marvelously overacts the line, "And now--Maximum Energy!" The rocket goes boom as Nadir watches on the monitor and cackles.

Back on Earth, NASA calls a press conference near Cape Canaveral. The recent series of mysterious destruction of their rockets--and presumably their satellites full of sex geckos--has not daunted NASA's determination to explore the universe. It is the great honor of Dr. Adam Steele (James Karen!) to introduce the latest pilot to be foolhardy enough to go up into space, Colonel Frank Saunders (Robert Reilly).

The press is dumbfounded by the charming Col. Saunders, as none of them had ever heard of him before. They're understandably also perplexed when the Colonel suddenly freezes completely in the middle of laughing at a joke, like he were the physical embodiment of Internet Explorer. Dr. Steele quickly ushers Saunders out of the room, laughing the mysterious episode off as exhaustion. In an adjoining room, Steele and is assistant Karen Grant (Nancy Marshall) go to work on fixing the "exhausted" man.

You see, for some reason that is felt necessary to be kept secret from the public, Col. Frank Saunders is an android. Dr. Steele didn't feel any more human lives should be lost to the space race and, somehow, whipping up a wholly convincing mechanical human was considered the best way around that. Nobody seems to consider that announcing that the US has practically perfected robots would really put one over on the Russians.

At any rate, a newly repaired Frank is launched into space as planned. Unfortunately, the Martians are no less receptive to his space capsule's presence than the last and shoot him down. However, they perceive that Frank's capsule was not destroyed and crash landed in Puerto Rico. So, they land their ship there to both finish the job and begin kidnapping bikini babes.

One Martian does find Frank and zaps him with a ray gun. The blast fails to kill him, but it does burn off half his face and render him a bestial creature--striking out with violence at any perceived threat and also occasionally carrying off women. As "Frankensteins" do, you see. Because he's a "Frankenstein" now.

There's really not anything more to the plot than that. Frankenstein stumbles around killing people he encounters while the Martians kidnap women and lasciviously examine them--with Princess Marcuzan's yea or nay vote determining if they are put in storage or, as far as I can tell, vaporized. The rest is travelogue footage of Puerto Rico set to some truly awesome rock music while Dr. Steele and Karen search for Frankenstein.

Eventually they do find Frankenstein, but then the Martians find Karen. Oh, and there's a Martian mutant named "Mull" (Bruce Glover) that's kept in a cage inside their ship.

Eventually the military is involved and Frankenstein does, indeed, meet the Space Monster. So you can't fault them for false advertising there!

Though, like Frankenstein Meets The Wolf Man before it, there's no point in placing your bets on the winner. (And not just because it's totally Wolf Man, come on!) As in that film, the titular monsters meet their end when outside forces intervene and render their fight to the death a stalemate. In this case, when the now-heroic Frankenstein sacrifices himself by using a laser gun to somehow destroy the Martian spaceship.

If I made this film sound cheap and terrible, well, that's not far off from the truth. However, while most write the film off as terrible and leave at that, I found it a delight. Oh, it has all the hallmarks of a truly terrible viewing experience--a near total lack of forward momentum in what could loosely be called its "plot" and endless travelogue sequences that add nothing to the film beyond a time capsule of what Cape Canaveral and Puerto Rico looked like in 1965.

And yet, I love it for all that. The music accompanying those sequences is truly awesome. And while they're very repetitive, the scenes with the Martians are a sheer delight. Not least due to the wonderfully hammy performances of Lou Cutell and Marilyn Hanold as Nadir and Marcuzan, respectively. And despite looking like a cross between Paul Blaisdell's Martian from It! The Terror Beyond Space and a gorilla suit with mange, Mull is a fun matinee monster.

The only place the film can be said to "stumble" as it were, is with its "Frankenstein." The burned-off face of its android monster is incredibly unimpressive--even compared with the rush-job the film did on its Martian make-up--and we get no sense of Frankenstein as a character. Just because he's a berserk android killing indiscriminately (well, more like "killing when people decide they should attack a guy who looks like he just lost a fight with a flamethrower instead of offering him medical attention") doesn't mean he has to be lack any sense of personality or character beyond that.

Hell, Mull is just the typical gropy, growly monster in a cage that's barely in the movie and he feels more realized than Frankenstein--you know, the one we're supposed to root for in the final battle.

In spite of its incompetence and meandering nature, this is a damned entertaining yarn. I could never call it a good movie--it is definitely bad--but that doesn't make it any less enjoyable. If nothing else, you will probably find yourself, even weeks or months later, incapable of resisting the urge to imitate Dr. Nadir's line reading of, "And now, Maximum Energy!"

This concludes day 6 of HubrisWeen. Click the banner above to see what the other knuckleheads chose, won't you?