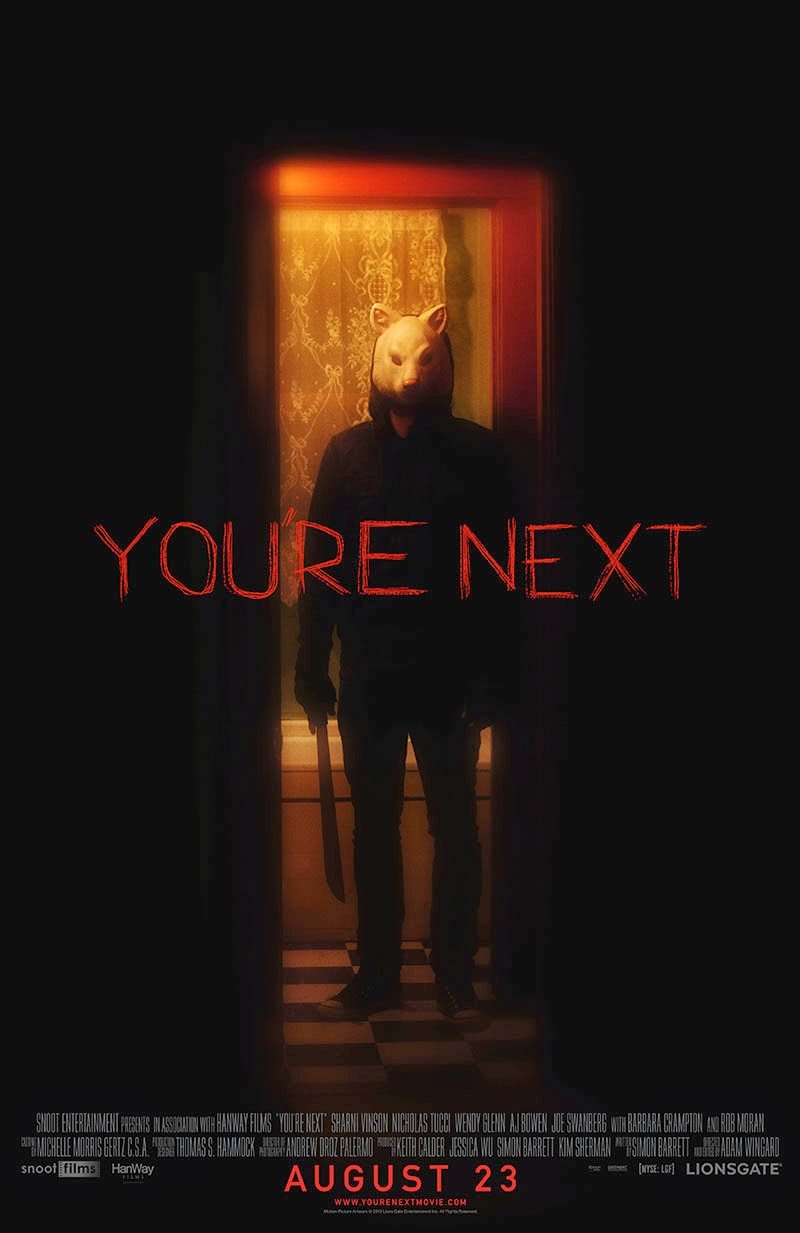 Pleasant surprises are one of the best parts of being a genre fan.

I guess I owe her one, because she made the right call and You're Next proved to be almost nothing like what I had expected.

The film starts off, not horribly promisingly, with a sex scene between a middle-aged man and his much younger girlfriend. After he finishes, he goes to take a shower, leaving her to make herself a screwdriver and blare some music on the stereo. Stepping out of the shower, the man finds that the sliding glass door between the bedroom and living room has something written on it in what appears to be blood. He can't read it at first, because it's written so it can be read on the other side of the glass, but we get to see that it says "You're Next."

If he appreciates the nod towards proper grammar, he doesn't get to express it. For right about then he sees his lover's dead body lies on the other side of the glass. And then somebody in a Lamb Mask (L.C. Holt) attacks him.

This may seem like a typical body count murder, but it will actually be relevant later on.

We now join Australian ex-pat and grad student, Erin (Sharni Vinson) as she rides along with her boyfriend, and former professor we will later learn, Crispian (A.J. Bowen), as he drives them to his parents' vacation home for a family reunion in celebration of his parents' anniversary. There's some banter about what to expect, but despite Crispian's doom and gloom, Erin is excited to meet his family. Though it is a little unnerving that his father works for a major defense contractor.

His parents, meanwhile, are just arriving at the house--which just so happens to be down the street from the murder house. Family patriarch Paul (Rob Moran) and Aubrey (Barbara Crampton! Whom I felt immediately ashamed at not recognizing when the end credits rolled, but to be fair I'm not used to seeing her fully clothed for an entire film) begin unloading their car and settling in--but then Aubrey hears someone upstairs when she knows that she and Paul are both downstairs. She freaks out and refuses to stay in the house, but Paul is stubborn and goes to investigate. Paul gets a false scare when Crispian runs into him, having just arrived--and wondering why his mother is in the driveway crying.

Erin is doing her best to comfort Aubrey, considering it's not an ideal first meeting. Aubrey is eventually convinced that it's okay and the house is safe. Soon after, Crispian's brother, Drake (Joe Swanberg) and his wife Kelly (Margaret Laney, credited as Sarah Myers) arrive; followed by his other brother Felix (Nicholas Tucci) and his girlfriend, Zee (Wendy Glenn); and finally baby sister Aimee (Amy Seimetz) and her boyfriend Tariq (horror director Ti West, of House of the Devil and The Innkeepers fame).

The next day, as the menfolk work on barbecue and the like, Aubrey sends Erin to go fetch something from the neighbors. Naturally, it's a no go because nobody answers the door, but Erin manages to avoid discovering why just yet. Meanwhile, Crispian gets to have a hugely uncomfortable talk with his dad about some academic promotion he failed to achieve. The kind of talk where your dad makes you feel like a failure because of circumstances beyond your control. Ah, family!

And so, that evening the family settles down to dinner. Naturally, Crispian's misgivings turn out to be well-founded as some clearly familiar sniping eventually turns into arguing. Drake, in particular, proves himself a massive douchebag. (Fitting, since the actor resembles a douchebag I used to know) First Drake mocks Tariq's artistic endeavors (he makes documentaries for "underground film festivals") and then he sets his sights on accusing Crispian of impropriety for dating a former student.

But that's nothing compared to what happens when Tariq sees something outside one of the dining room's huge windows--and takes a crossbow bolt between the eyes while investigating. In the subsequent panic, another bolt hits Drake between the shoulder blades. It's only Erin's cool head that gets the others out of the vulnerable position in the dining room to the largely windowless front hall. She also stops the others from pulling the bolt out of Drake's back, saving him further injury.

The group quickly discovers their cell phones are being jammed. Whoever's doing this is deliberately isolating them. Deciding that someone needs to go for help, even over Erin's objections, it's eventually decided that since Aimee is the fastest--well, second-fastest, but Drake can't run right now--Crispian and Felix will stand by the front doors and fling them open once she gets a running start. Surely, their assailants will struggle to hit such a quick target.

Of course, they don't need to. A garrote wire has been strung across the outside of the threshold, and it severs Aimee's jugular. The others can only watch helplessly as she bleeds out at their feet. Having to watch her only daughter die is too much for Aubrey and Paul takes her upstairs to lie down. Except that Aubrey isn't alone. A man in a Fox Mask (Lane Hughes) crawls out from under the bed--man must have the patience of a Graboid--and buries a machete in Aubrey's face. The others hear her scream but are too late to save her, and Fox Mask found time to write "You're Next" in her blood before vanishing.

Erin takes charge, directing everyone to secure the windows while she continues trying to reach 911 by sending text messages. As she is securing the windows in the kitchen, a man in a Tiger Mask (Simon Barrett) smashes through the window and grabs her. Erin is not the easy victim he expected, however, and he gets a knife to the hand for his trouble--pinning him to the window frame. However, he still manages to escape after Erin frees herself from his grasp.

Kelly, in the midst of covering Aubrey with a sheet, decides to check under the bed. Oh, hey, Fox Mask is still there. Kelly panics and runs out the front door, narrowly ducking under the garrote wire. Drake, a bit groggy from some pain pills he was given, attempts to follow and catches the crossbow bolt on the wire. Without thinking he pulls the bolt out...and immediately passes out from pain and blood loss. Crispian decides it's time to play the hero and, after going to check the cars--which, naturally, are all missing vital engine parts--he volunteers to go for help. Erin tries to remind him that there are an unknown number of hostile psychopaths who are really good at killing people and he's a paunchy academic, but it's no use and away he goes.

Oh, and Kelly? She finds her way to the sliding glass back door of the neighbor's house, but the man on the couch won't react no matter how much she pounds and yells. Of course, we know why but she doesn't find out until Lamb Mask looms up behind her and smashes her through the doors. Kelly now sees the man on the couch is quite dead, but she's too dazed to get back and flee. So Lamb Mask takes his axe, sets her head up like a croquet ball and then swings his axe into it. Lamb Mask has a seat on the couch to admire his work.

Erin, meanwhile is rallying Felix and Zee to help her round up weapons. She has just grabbed a meat tenderizer when Kelly's body is thrown through the dining room window and Tiger Mask enters, looming over Erin--and she smashes his knee with the meat tenderizer and then proceeds to tenderize his skull. Repeatedly. When she pulls the mask off and asks if either Felix or Zee knows the guy, Felix understandably replies, "It's...kind of hard to tell, now."

You see, as Erin will later explain, she had an unusual childhood. She was raised on a survivalist compound by her father. So those psychos in the animal masks have no idea what they're dealing with. Although, Erin may not know, either. You see, this is not just some random attack. This was planned, and the danger outside isn't the only thing Erin should be worried about.

I was a little hesitant on spoiling one of You're Next's greatest surprises, but given it's kind of a major selling point I figured it needed to be pointed out: the fact that Erin may be the most uniquely capable Final Girl ever. About the only way her opponents could be more out-matched would be if she had Ripley and Sarah Connor backing her up.

The part seems to have been written specifically for anyone who ever expressed annoyance with useless characters in a slasher movie. And while, technically, You're Next isn't a quite a slasher film, it definitely should be exactly what the doctor ordered if you're one of those people. When's the last time you saw anyone kill an antagonist with a blender outside of an early Peter Jackson movie?

The acting is quite good and very naturalistic, apparently a result of this film being an offshoot of "mumblecore", a horror subgenre I've otherwise avoided to my knowledge. Many conversations almost feel improvised or else copied verbatim from actual family squabbles. It's also clearly a film with a very dark sense of humor, but never to the detriment of the menace its masked assailants promise. Sure, they're fallible and mortal, but these are are still men who know how to kill you and well.

And, while definitely gory, You're Next doesn't wallow in slow, horrible death like so many films in the aftermath of Saw. These killers are here to make everyone dead, not to torture them. That as definitely part of the pleasant surprise for me, as I never looked back at the Saw franchise after part two and have no desire to--or its illegitimate spawn.

If you like horror movies, you'll definitely love You're Next. If you don't, well, this probably isn't going to change your mind.

This concludes day 25 of HubrisWeen, which means the end is nigh! Check out what the other maniacs chose for their Y movie by clicking the banner above.