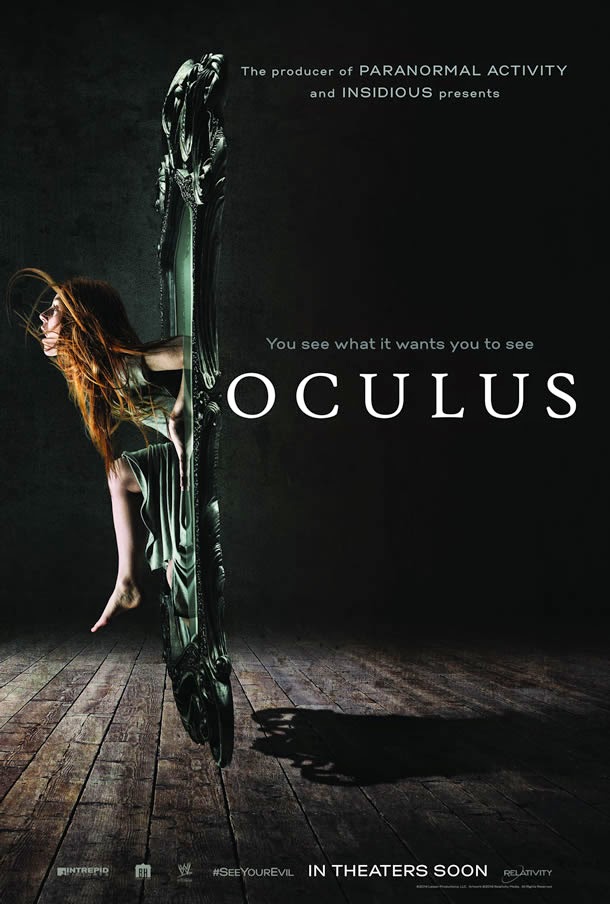 One of the curious aspects of human nature is that, if there is a rational explanation and a supernatural one—we tend to prefer the supernatural one. Surely humanity is not capable of such evil: the devil must have influenced us! That man couldn’t have killed his whole family because he was a cruel sadist: he was influenced by a demon!


It’s no doubt because supernatural evil is more comforting. It allows us to believe that humanity itself is basically good, but we are vulnerable to outside sources of evil.


Much as we would like to believe that outside evil exists, when it comes time to put that into practice our faith tends to vaporize—particularly in the legal system. A man claiming on the stand that he was possessed by a demon when he murdered three children is, at best, going to be seen as attempting an insanity plea. After all, a criminal case requires evidence and supernatural evil conveniently does not leave any.


So when ten-year-old Tim Russell (Garrett Ryan) shot and killed his father, Alan (Rory Cochrane), in defense of himself and his 13-year-old sister, Kaylie (Annalise Basso), it’s no surprise that his version of the events was concluded to be a psychological defense mechanism. Tim was committed until his 21st birthday and his sister was left to the foster system. 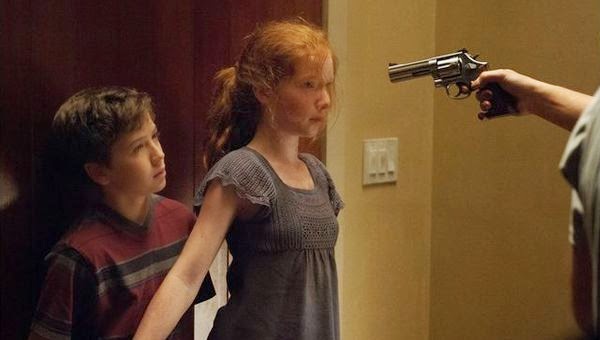 Tim (now Brenton Thwaites) has made impressive strides in accepting the reality of what happened over the intervening eleven years. When he tells Dr. Graham (Miguel Sandoval) about his recurring dreams about the night he killed his father, he reveals that lately the dream has changed. Now, after Tim and his sister flee from their gun-wielding father, only to run afoul of a spectral woman with silvery eyes (Kate Siegel)—the figure that then corners them with the gun is no longer their father, but Tim himself.


Dr. Graham concludes that this means Tim has finally accepted his responsibility. He recommends that Tim be discharged, and so he is. However, Dr. Graham warns Tim that reuniting with is sister may be a mixed blessing. Kaylie hasn’t had the same psychological treatment for the past decade, so she has had to deal with the tragedy in a different way. Dr. Graham encourages Tim to work on repairing the bond with his sister, but to be protective of his own recovery.


Speak of the Devil, Kaylie (Karen Gillan, sadly sporting an American accent—albeit a very good one) is meeting her fiancé, Michael (James Lafferty), at the auction house they both work for. Up for auction today is a rather sinister-looking antique mirror, and Kaylie eyes it with apprehension. When it’s sold, she seems to relax and then says goodbye to her fiancé so she can go pick up Tim.


It isn’t long after the two get caught up over dinner that Kaylie reveals she’s not just eager to have her brother back. See, she’s finally found it, and she reminds Tim of the promise they made in the wake of their parents’ deaths to kill it when they were older.


Oh yes, Alan Russell was not a single father when his son killed him in self-defense, or at least not up until right before his death. The movie actually begins to tell two different stories at this point, interwoven.—the present and the events leading up to the deaths of their parents.


In 2002, Alan and Marie (Katee Sackhoff), moved into a new home with their two children. Evidently, this was part of a push for a new business Alan was to be running out of this new home. Precisely what this business was is never fully elaborated on, but Alan felt it justified sprucing up his home office—by hanging a familiar antique mirror on the wall.


The mirror is what Kaylie is so excited to kill, naturally. She made sure that the auction house purchased the mirror for sale and—under pretense of having the crack in the mirror’s glass repaired—she has smuggled it into their old house. Tim doesn’t know this when he agrees to meet her there, and thus finds that she has set up a full paranormal battleground in their father’s old office. She has banks of cameras hooked to computers, thermostats, alarm clocks to ensure that Tim and Kaylie eat and hydrate regularly, dozens of houseplants, a Boston terrier in a kennel to serve as a guinea pig, and—most importantly—a “kill switch.” Said kill switch is a boat anchor suspended from the ceiling, weighed down by barbells, and triggered by a kitchen timer. No electricity is involved, Kaylie emphasizes: the mirror is placed in the path of this makeshift pendulum. If it wants to survive, it has to keep them alive to reset the timer.


Kaylie begins by addressing the cameras to give backstory on the dreaded mirror. No one knows where it came from originally, but everywhere it has gone, calamity has followed. People have died of dehydration in their bathtubs, murdered their children, or committed suicide. Everywhere it has hung, plants have died and pets have gone missing. And, in 2002, the Russells were the last family to own it—months before Alan Russell tortured and killed Marie Russell before being shot by his son in self-defense.


This is where Tim explodes. He was, effectively, heckling Kaylie throughout her presentation to the cameras by pointing out that none of this was conclusive evidence of an evil mirror—but bringing it back home and threatening his own recovery is too much. While Kaylie may still cling to the idea of an evil mirror influencing their father’s behavior, Tim has long since come to terms with the fact that their parents had a bad marriage and as a result their father was having an affair and, at some point, he turned violent and sadistic.


The two siblings argue loudly and violently. Kaylie remembers their dog mysteriously disappearing after being locked in the office with the mirror, but Tim counters that the dog fell ill and was taken to be put down. The spectral woman Kaylie saw whispering to their father in his office was just his mistress, and all their plants died because of water problems. After Kaylie essentially attempts to feed the Boston terrier to the mirror, Tim has had enough and lets the dog go. Kaylie tries to stop him, but is too late and the dog has already fled far off down the street.


This takes the two out of the room for only a few minutes, but when they return all the cameras have been moved face-to-face and all the plants are dead. When Kaylie pulls up the footage from a third camera, the two watch themselves move the cameras around while obliviously carrying on with their argument. This is too much for Tim and he rushes outside and dials Dr. Graham, desperately seeking help interpreting this event...

...only for Kaylie to suddenly shake him out of a stupor, sitting on the floor outside the old office. Tim never left the house, he just thought he did. The mirror wanted him to think that. Kaylie is triumphant, since it's pretty clear that there is no rational explanation for what just happened. The mirror is evil and it shall be destroyed.

Except how do you destroy something that can make you completely unable to trust any of your senses? 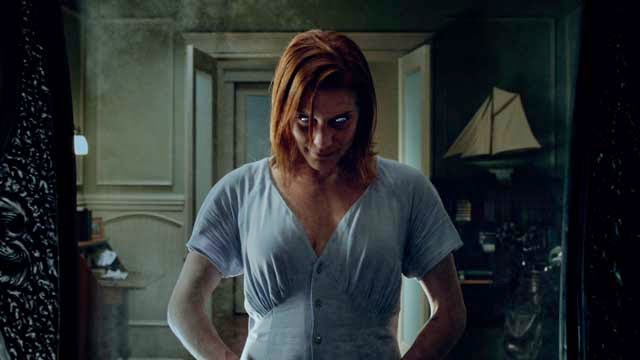 Mirrors are, without question, one of those completely innocuous parts of life that are also somehow intensely creepy. We've all had some moment where we expected the face in the mirror to move of its own accord, right? Well, what would you do if it did?

Oculus taps into that irrational fear quite nicely and, what's more, it's actually a very intelligent film. That's especially surprising given you don't expect an intelligent horror film to have the "WWE Studios" logo before it!
Yet that's what we get. It sets up its rules and it plays fair by them--though the brilliance of its rules is that they amount to, "This mirror is evil and can make you believe anything it wants you to, and it can make you do anything it wants you to." With such broad rules in place, it's hard to mess up and suddenly have the mirror do something it explicitly was said that it cannot.

The film's intelligence also lies in the fact that, for a good third of its running time, it is a two-person play where Kaylie and Tim argue back and forth about what exactly happened to their family--even using conflicting versions of the same flashback to illustrate their points. Both are convincing in their own way, though naturally it is Kaylie's version of events that wins out.

Personally, I feel that is the film's greatest weakness. We all know that the mirror must be actually evil, of course, but it would have been nice to maintain some doubt for a bit longer. I really enjoyed the interplay between the supernatural and the rational.

So how does Oculus compare to the average modern horror flick? Like its brethren it does tend to rely overmuch on loud noises and jump scares, but they never feel cheap. Far better is that it relies on fostering doubt in its audience about what is really happening.

When Kaylie set down that light bulb and that apple, which one did she really bite into? When they're outside, looking in at themselves standing between the mirror and the anchor, are they really? Is the person Kaylie killed, thinking they were a projection of the mirror, actually there? Some of these questions are answered, some aren't--and others maybe we only thought were answered. How could we ever know for sure?

For my own part, I enjoyed the film. That its focus was mainly on two people in one room, with flashbacks to illustrate the story of their first encounter with the mirror whilst they confront it again, really helps to build interest in the characters instead of making them just expendable meat. And everyone in the film puts in great performances, including the child actors in the flashbacks.

Is Oculus an instant horror classic? I wouldn't go that far. I don't think it's an especially memorable film, ultimately. It gets under your skin while you watch it, but it doesn't really stay with you. it's also not something I'm eager to watch again and again. However, it's a great movie for an afternoon or evening of ghost stories. I would recommend it, just maybe not as enthusiastically as some other horror movies.

I highly caution against watching it around mirrors, though. Don't give those bastards any ideas.

Hey, we've made it to day 15! Click on the banner above to see what everyone else chose.