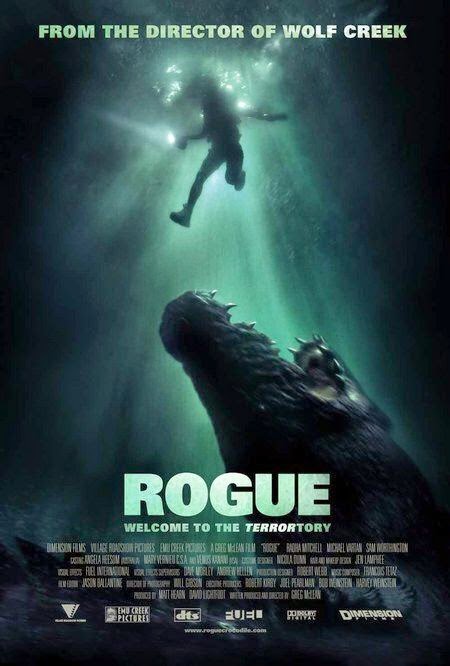 "What, another killer crocodile film? Wasn't one enough for a month? Does this reviewer hate himself?" Ah, but you see, there's a major twist here.

This is a good killer crocodile film.

We open with a little mood-setting wildlife footage of the sublime Australian Outback set to aboriginal chanting. This might as well be a video for the Australian tourism board, which is good since the rest of the film won't be. We're quickly reminded of why we're here when a water buffalo goes to get a drink--and a barely-glimpsed crocodile grabs it and drags it under the water, leaving only ripples.

American travel writer, Pete McKell (Michael Vartan) arrives at a small town in the outback. He's come there for an article he's writing, but he's in a foul mood because the airline lost his luggage--including his computer that he needs to write his article. He relays this to his editor via a cell phone, while waiting for the seemingly friendly bloke behind the counter of the pub he wandered into to fix him a cappuccino. Wadering the pub to get a decent signal, Pete finds himself confronted with a wall full of articles about killer crocodiles--including a photo of a twelve-year-old boy pulled out of the stomach of a croc. Pete's call drops and his complaint of, "The service here sucks," is overheard and misunderstood by the barkeep, who drops a dead fly in Pete's cappuccino in retaliation for the perceived insult.

Luckily for Pete, the capuccino is apparently awful enough that he discards it without swallowing the dead fly. And it's on to the riverboat tour that is apparently his reason for being there. The tour is run by Kate Ryan (Radha Mitchell!) and her "business partner", Kevin. (Her dog) Along for the tour are Irish tourist Gwen (Celia Ireland); American couple Everett (Robert Taylor) and Mary Ellen (Caroline Brazier); British family Allen (Geoff Morell), Elizabeth (Heather Mitchell), and their daughter Sherry (Mia Wasikowska, in one of her earliest roles); Australian Russell (John Jarratt), who has secretly brought ashes to scatter; and lastly Simon (Stephen Curry), also Australian.

The tour goes as expected, at first. Kate gets to explain a lot of facts about saltwater crocodiles on the way, the group sees one being fed by another tour and lunging several feet into the air to catch the offered meat. Kate assures the group that the crocs don't attack anything bigger than themselves, so they won't bother her boat. That rule doesn't apply to two local assholes in a motorboat, Neil (Sam Worthington, still a couple years away from his brief and inexplicable super stardom) and Collin (Damien Richardson), who decide to interrupt the tour. Based on the dialogue between them, I'd wager Kate not only knows both of them, but also used to date Neil. When Kate tells them to bugger off, Everett and Pete back her up--with Neil sarcastically labelling them "John Wayne" and "four-eyes", respectively. But Kate gets rid of them by effectively playing chicken, which results in Neil falling overboard. Though, despite an underwater POV shot staring up at him, he makes it back into his boat unharmed.

However, just as the tour is turning back, Everett spies a distress flare further up river--and then everyone sees a second one. Since Kate's radio doesn't work where they are, she is under obligation to go and investigate and provide aid if possible. After they go a few miles further up river there seems to be no sign of anyone who needs help, so Kate is about to follow Pete's suggestion of turning back. However, she then notices the boat that is just barely visible above water, already capsized and sinking with no sign of its occupants--and then a dark shape in the water rams the boat and punches a hole in it.

In a typical bit of horror movie desperation that seems smart but actually is the worst possible decision, Kate beaches the boat on the nearest dry land--an island in the middle of the river. It's only after they all file onto the island that Russell points out that they're in a tidal river, and based on the trees on their island, it's going to be underwater in a matter of hours. Russell panics and starts to swim for the river bank, reasoning that somebody needs to take the risk, but Everett stops him. The group is distracted because Simon gets a weak signal on the portable radio and they all turn to him--leaving their backs to Everett.

And before anyone can make sense of it, there's a splash and Everett has vanished--and a scaly tail breaks the surface of the water where he was standing before disappearing. This is the point where Rogue had me hooked because how many other movies of this type would have their first victim's demise be filmed with such horrifying subtlety?

Things continue to get worse, as the flares and other emergency supplies were on the back of the boat and have already floated away. Oh, and the signal Simon got? Music. Which turns out to be courtesy of Neil and Collin blaring music over the radio frequency as they approach the island and cruise in circles around it like jackasses. As they hover just out of earshot, mocking the group's frantic waving, it's Collin who realizes that something's wrong--just in time for their boat to be struck from below and go flying. Neil makes it to the island. Collin never resurfaces.

So our crocodile has already eaten two people that we know of, not counting the poor bastard who shot the flare. And Neil and Kate have figured out that the croc is acting territorial, which means that it was trying to warn them out of its territory when it attacked the boats. Only they didn't take the hint and that's got to be making it mad. And the fact that these flagrant trespassers are fragile, defenseless, and edible? Well, that means it's definitely going to be back. With dark falling and the tide rising, that means that our heroes are running out of options that don't involve being a crocodile's dinner.

I think I'll stop here as I really do think Rogue should be experienced and, while few of its developments are earthshattering in any way, they're delivered magnificently enough that I don't feel like spoiling them.

The film, despite it's "Dimension: EXTREME" release on American DVD that declares it "Unrated" in bloody letters, is much more of an old school horror movie. There's no nudity and there is surprisingly little gore. The film wants to scare you, not disgust you. It's mostly successful in that, too. The crocodile is barely visible until the very last section of the film, when two of the film's survivors find themselves in the crocodile's lair for the end game. We only need to know it's there, not see it. And the use of quick glimpses and the film's soundtrack--which sounds like Bernard Herrmann had been the one hired to score Jaws--do a marvelous job at building suspense.

The crocodile is largely CGI, but it's mostly convincing CGI. There's an actual attempt to give the creature mass, for one--observe it hauling its bulk out of the water for a nap in its lair--and it actually looks like the real deal. I mean, they actually replicated the pattern of the osteoderms on a saltwater crocodile's neck! It also behaves like an animal, not just a monster, which helps immensely.

I also have to give kudos to the film for not just blowing the crocodile up, like so many other Jaws rip-offs I could name. (Although, given the film's title, I once amused myself by imagining it starring a Sarah Palin parody and ending with her imitating the annoying reporter from the aforementioned other killer crocodile film and swimming into the croc's mouth with lit dynamite) Granted, I highly doubt the creature's vanquisher could have survived the method used to kill it, but that's not the only blatant instance of "hero's death battle exemption" in the film.

I highly recommend Rogue. It's not just a good killer crocodile film, which is amazing enough on its own, but it's a genuinely good horror film. I mean, my girlfriend even enjoyed it and she was not pleased that the dog doesn't make it to the end credits, which incidentally roll under "Never Smile at a Crocodile."

That concludes day 18. Go check out the other R entries by clicking the banner above.