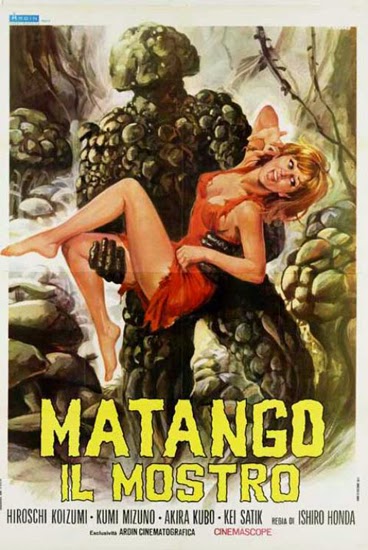 [aka, Attack of the Mushroom People]﻿

So many horror stories deal with monsters that are out to eat you, but there aren't very many that deal with something that might not seem as frightening at first glance: the monster that wants you to eat it.

When you consider how many examples in nature there are of horrifying parasites that trick their hosts into ingesting them so they can slowly destroy them from the inside, it's kind of surprising that more horror writers haven't exploited this angle.

Luckily, Ishiro Honda's second attempt at what could be considered a traditional horror movie focuses on just that. Adapting the short story "The Voice In The Night" by William Hope Hodgson--which I have not read--Honda delivers a horror even more effective than The H-Man. You could even argue that it is the equivalent of the Ryujin Maru II segment of that film expanded to feature length.

The film begins, much like The Alligator People and Equinox, with the lone survivor of the film's events telling the film's story via flashback. In this case, it's University Professor Kenji Murai (Akira Kubo, the man who seems to have had a lead in nearly every big sci-fi film that Toho released in the 1960s), who is pacing his cell in a Tokyo psychiatric ward. He knows the audience of doctors staring at him through the bars won't believe him, but he swears his story is completely true.

And then we jarringly cut to the opening credits where composer Sadao Bekku's jaunty theme music proves even more mismatched to the dark material than Masaru Sato's in the The H-Man. The credits roll over footage of a yacht at sea, which will turn out to contain Kenji and his timid student girlfriend, Akiko Soma (Miki Yashiro); famous singer and femme fatale, Mami Sekiguchi (Kumi Mizuno!); mystery writer and not-so secret lover of Mami's, Etsuro Yoshida (Hiroshi Tachikawa); Mami's official lover and yacht owner, Masabumi Kasai (Yoshio Tsuchiya); skipper Naoyuki Sakuda (Hiroshi Koizuma); and Naoyuki's first mate, Senzo Koyama (Kenji Sahara!). Right away it's importat to note that everyone in the group is wearing a gaudy gold medallion--except for Senzo, which automatically sets the sailor apart from the group of friends.

The group, clearly having rather a low opinion of life in Japan, have set up their little sailing vacation to get away from the hustle and bustle of city life. But as Mami strums her ukulele and sings a song that continues to have a ukulele part even after she puts hers down to dance across the deck, a horrible storm whips up. There may be no giant lobster to destroy their yacht, but they still end up adrift and at the mercy of the ocean currents.

It doesn't take long before the group are sniping at each other, especially after listening to a news report on their yacht's disappearance saps the last of their radio's battery. There's the typical alpha male posturing even this early on, and Senzo lecherously musing about how women are bad luck on boats because they distract the men. And Yoshida raises a false alarm after hallucinating a ghost ship running them down. Clearly low food and water is taking its toll.

The sight of an island, then, is a welcome one. Except the island--a beautiful yet foreboding place with black, volcanic sands and lush vegetation, but surrounded by fog--appears deserted at first. However, while fetching fresh water, Senzo observes that the stones in the stream have been deliberately rearranged. It isn't long before the group finds a ship that's run aground on the other side of the island, but Naoyuki dims their spirits by pointing out the sails on the wreck are rotted. It's been there at least a year based on that and the corrosion of its metal hull.

Inside, the ship is absolutely coated with mold of all colors--including a blood-red variety in the captain's cabin, where Kenji retrieves the log book. The group finds a lab in the ship, full of strange specimens like a sea turtle with no eyes--mutations caused by radiation. The shelves with the specimens are clear of fungi, so Naoyuki realizes they must have been disinfected somehow. There's some disinfectant fluid in jugs next to a locker labelled "Matango" in English--or at least modern Latin characters. Inside the locker is a giant mushroom, but no one really wants to hazard a guess as to whether it's edible.

Lucky thing that Kasai finds Senzo and Yoshida in the hold, helping themselves to canned food. The group works to scrub the ship's interior clean of mold and make the place livable for as long as necessary. Kenji is particularly unnerved by the ship, as it does not appear to have any distinct nationality--there are items from communist and democratic countries, and even Western and Japanese. It seems to have been on some secret mission, though whether benevolent or sinister is anybody's guess. At any rate, the log book strongly suggests that no matter what they should not eat the mushrooms that grow freely on the island. The crew of the derelict apparently went mad after ingesting them.

Unfortunately, the canned food will only last them a week. So they'll have to find other food by hunting, fishing, or foraging for edible roots and sea turtle eggs. Despite Kasai's efforts to clean the rifle found in the captain's cabin, there seems to be no animal life on the island--and, in fact, while hunting he and Kenji see a sea gull immediately change direction when approaching the island, taking it out range of the rifle. It couldn't have seen them from that distance, and yet something warned it off. Worse, Kenji and Kasai see something moving in the forest--something with a bulbous head and a vaguely humanoid body. Kasai puts three bullets into the figure, but there's no evidence of the thing when the two approach its last position. Other than the shattered chunks of mushroom they fail to notice, that is.

When Naoyuki and Senzo bring the yacht around to anchor it closer to the derelict for repairs, they discover that the water close to shore is riddled with sunken wrecks. The current around the island must trap ships, and worse the ever-present fog means no nearby ship would see them. And then Senzo finds Yoshida and Mami making out--and I do mean making out, something I don't think I've seen in any other Japanese sci-fi or monster film--and the two men fight because Senzo thought everyone had agreed to leave the women alone. Mami is positively delighted by the men fighting over her ("Everybody wants me," she tells Akiko haughtily), but it's the last thing anyone needs. Things look pretty dire even before one night, while Kasai is stealing food from the hold, something seems to attack him. Kasai and the others take shelter in the bunks, but the hatch opens--and a misshapen face that looks to have once been human glares in at them.

The next day, no one wants to acknowledge what they saw. Yoshida has been eating the mushrooms on the island and he grabs the rifle and threatens to kill the others if he doesn't get his way. They manage to overpower him and lock him in the captain's cabin, but that's the breaking point. Naoyuki steals all the remaining supplies, including the extra turtle eggs Senzo had been hiding in a cave, and sets sail with the now-functioning yacht. Mami lets Yoshida out and helps him as he uses the rifle to threaten Kenji and Kasai, while demanding Akiko be his. Senzo returns to the derelict just in time to take three bullets from the crazed Yoshida, but that allows Kasai and Kenji to take back the rifle. Kasai banishes Yoshida and Kasai to the wilds of the island to feed on the mushrooms to their hearts' content.

The yacht returns, but Kenji finds that it is deserted--the only sign of Naoyuki being a suicide note the skipper scrawled on the wall of the cabin before throwing himself overboard. Kasai wanders away from the derelict and runs into Mami, who explains she's not hungry anymore. She lures him into a cavern filled with mushrooms and coaxes him to eat them. Kasai relents and has a vivid hallucination of neon signs and show girls. When he comes down and reaches for more mushrooms, Mami tells him that she should have warned him--once you eat the mushrooms, you become a mushroom.

The sound of unnatural laughter fills the cavern as Kasai realizes that Mami's skin has taken on a decidedly unnatural tint. He sees Yoshida, laughing and waving despite his deformed face. And worse, humanoid mushrooms rise up all around him. The laughter grows louder as the mushroom creatures surround Kasai. You see, not only are the mushrooms addictive, but they're very determined to be eaten by anyone who comes to the island--and they won't take no for an answer.
Matango is one of those movies where you can't help but wonder if it inspired Night of the Living Dead or if they had similar inspirations. Both films deal with how a group of people in survival conditions fall apart and turn on each other, and the sequence of the deformed former crew of the derelict swarming the cabin to drag Akiko and Kasai to the mushroom cavern is highly zombie-like. There's even a severed arm from one of the transitional mushroom men! And both films have an incredibly misanthropic worldview.

What truly is amazing about the film is how well it sells its premise. The mushroom creatures should be goofy and laughable, but with the damned laughter that accompanies them they end up close to terrifying. The film is positively dripping with atmosphere, as well, from fog-shrouded shores, to derelict ships, and mushroom caverns.

The actors all turn in amazing performances, with the true standouts being Kenji Sahara as the sleazy sailor and Kumi Mizuno as the flagrant femme fatale. And the creature designs are marvelous, from the repulsive transitional humans to the full-on walking mushrooms.

Unlike Honda's previous horror effort, The H-Man, we don't waste time with characters not directly related to the main plot. There's no distraction from the monsters--especially since, like any zombie movie worth a crap, it may not be the mushrooms that are the real monsters.

See this, if you can. You won't regret it.

This concludes day 13 of HubrisWeen! Check out what the other maniacs chose for their M movie by clicking the banner above.