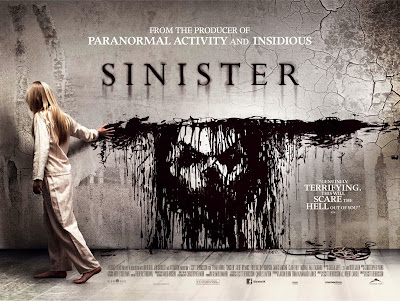 While watching Sinister for the first time, a thought occurred to me: the majority of the horror genre is about punishing the curious.

It takes all kinds of forms. The scientist who wants to prove a theory about human nature and instead turns himself into a monster. The archeologist who uncovers a tomb and unleashes a mummy. The poor schmuck who uncovers a coffin and pulls the stake out of the ribcage of the skeleton inside.

Or the outsider who starts digging around in secrets that the town they've wandered into wants to stay buried.

Horror hates a shit-stirrer, to be blunt. Unfortunately for Elliot Oswalt (Ethan Hawke!), "Professional Shit-stirrer" might as well be his job description. Ellison is a true crime novelist, who first made it big with Kentucky Blood, where he helped to crack the case of an unsolved murder. Since then he hasn't managed a true hit, so out of a strong desire to avoid writing textbooks he moves his family to a small town in Pennsylvania--where a year earlier an entire family was brutally hanged in their back yard and one of the family members, their ten-year-old daughter, went missing.

Ellison's wife Tracy (Juliet Rylance), pre-adolescent son Trevor (Michael Hall D'addario), and young daughter Ashley (Clare Foley) are less than thrilled about this, but they'd be even less thrilled if they were privy to knowledge that we are, thanks to the power of dramatic irony. See, at the beginning of the film we got to watch a Super 8 film of the murder (which brings back memories of my years as a film transfer tech), so we know that Ellison has moved his family into the actual house where the murder took place.

In a turn of events that is apparently all too familiar for the Oswalt family, they are greeted at their new home by the local Sheriff (failed presidential candidate Fred Thompson!), who is not at all thrilled by Ellison's arrival. Not only is Ellison an unwelcome outsider, but one of his last novels actually succeeded in fouling up a murder investigation so thoroughly that the killer was set free despite ample evidence. As far as the Sheriff is concerned, Ellison is nothing but an opportunist intent on cutting open wounds that hadn't even healed for his own glory.

The Sheriff isn't wrong. When investigating the house's attic, Ellison encounters an Emperor scorpion that has somehow gotten loose in Pennsylvania. (Maybe it was the family's pet?) He squashes it with a convenient box full of...8mm reels and a projector. A box that, according to Ellison's crime scene photos, shouldn't even be there.

And yes, the film reels are 8mm but the opening and the footage throughout the rest of the film is clearly Super 8. Sigh.

The reels are all labeled innocuously enough: "Family Hanging Out '11", "BBQ '79", etc. Of course, this does nothing to quell Ellison's curiosity and he watches the first reel. Turns out, "Family Hanging Out '11" is the murdered family hanging out in their back yard and then--hanging out in their back yard. Ellison starts to call the police to report evidence of the murder, but then glances at a copy of Kentucky Blood on his shelf and changes his mind. Sure, he could do the right thing, but he just happened upon the best material for a book he could ever have hoped for.

And that material pays even more dividends than he originally suspected. The next reel is a completely family and it ends with them, bound and gagged, being set on fire inside their car in their garage. Ellison has stumbled upon what could easily be the trophy case of a serial killer.

Except it isn't that simple. On one of the reels, a family is bound to lawn chairs and dragged into their pool to drown--and that's when Ellison notices something truly bizarre. Under the water of the pool, staring back at the camera, is a mysterious figure (Nicholas King) with a sharp nose, sunken eyes, and apparently no mouth. When Ellison tries to pause the film to get a better look at the figure, the relevant section of the film burns up. However, Ellison quickly discovers the figure is present somewhere in the background of all the previous reels and, using a digital camcorder and his laptop, Ellison gets a good frame of the figure's ugly face.

Meanwhile, strange things are happening in the household. Trevor's night terrors, which Ellison and Tracy thought he had outgrown, have come back. He's also acting out at school. And Ashley has been painting images of the murder on her bedroom wall. Then it somehow gets worse.

Late at night, Ellison hears somebody running around in the attic, but only finds a king snake, which couldn't have been responsible for the noise because--as will be pointed out to us later--snakes don't have feet. Ellison then finds the lid to the box of 8mm reels. It has drawings, done in a child's hand, of the various murders--and all of them include a figure labeled as, "Mr. Boogie." Ellison takes video footage of the drawings right before he falls through the ceiling. Upon reviewing the footage, he sees that he accidentally filmed his fall--and it appears that a bunch of tiny, ghostly hands grabbed him.

If you think he's freaked out now, imagine how freaked out he'd be seen that the still of "Mr. Boogie" on his computer had turned to look at him scant moments before. Has Ellison found something, or did it find him?

Sinister, at first glance, seemed to me to be very much a modern horror movie when I first saw trailers for it: wallowing in torture and loud jump scares. And it does have its moments of that. However, while the film does have some gore the most horrible fates are mostly implied--the film wisely relies on the inherent creepiness of grainy old film stock to set the mood.

I was pleasantly surprised by the film upon my first viewing. Watching it again for this review, I find it still to be an incredibly well-done horror story.

The film is not a character piece. It's not especially original. However, it is a very effective spook story and, like I said, immediately set me to thinking of how beautifully it shows how the horror genre feels about sticking your nose where it doesn't belong. The score is nicely distinctive and the use of Super 8/8mm is wonderfully atmospheric. And there is a jump scare with one of the 8mm reels that is incredibly effective.

If the film has a weakness, ultimately, it's that "Mr. Boogie" isn't horribly scary. He looks like the front man for a metal band more than the obscure ancient demonic deity he is meant to be. However, he is used sparingly enough that his presence allows him to unnerve us rather than his unremarkable appearance.

The film also more than makes up for this deficiency by featuring an uncredited Vincent D'Onofrio as Dr. FreeX!

In the end, the best recommendation I can give for Sinister is simply this: I wouldn't advise watching it right before bed.

Or after you've been stirring shit.

Posted by Random Deinonychus at 8:20 PM