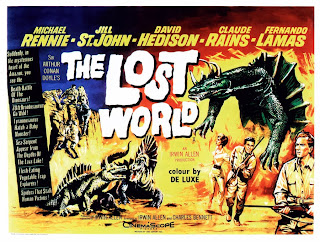 The suffering artist is such a cliche that we often forget that it's because there are a lot of suffering artists out there. Unfortunately, Willis O'Brien can be counted among their number. A pioneer of visual effects, O'Brien is usually credited with, if not outright inventing it, then certainly turning stop-motion animation into a viable special effects technique. Without Willis O'Brien we would not associate the Empire State Building with a giant gorilla swatting at bi-planes. Yet the film that arguably put O'Brien on the map was 1925's The Lost World, the first film adaptation of Sir Athur Conan Doyle's novel.

O'Brien's technique was still a bit jerky and not as smooth as it would later become, but there is nothing quite like watching his ferocious Allosaurus confront a sneering Brontosaurus. Said sneer would later be displayed by another Brontosaurus of O'Brien's just eight years later when he completed his masterpiece, King Kong.

And then it all went to shit.

Almost none of O'Brien's other projects that he wanted to complete could get off the ground, but O'Brien found himself attached to a rushed sequel, Son of Kong, that he wanted nothing to do with and left much of the animation to his assistants. At this time O'Brien's ex-wife, who was dying of cancer and tuberculosis, shot and killed their two sons before turning the gun on herself. In a truly cruel bit of irony, the bullet drained her lung and actually prolonged her life by another year. It was shortly after this tragedy that the best-known publicity photo of O'Brien was taken.

O'Brien had some scattered successes afterwards, but only Mighty Joe Young came close to the success of King Kong. So it is not surprising that O'Brien would turn to his earlier successes to attempt to find a return to glory. Fate and the whims of cheap Hollywood producers would conspire deny him that glory.

King Kong vs. Frankenstein, a proposal that would see Kong facing down another giant beast formed of African animals (though its concept art would just suggest a resurrected giant ape, similar to Kong), would instead be sold to Toho studios to become King Kong vs. Godzilla. About the only link to O'Brien in the film is a momentary bit of stop-motion when Godzilla kicks Kong square in the chest. Yet far more insulting is today's entry, Irwin Allen's The Lost World. O'Brien had envisioned overseeing the effects for a lush, Technicolor and Cinemascope remake of his 1925 silent film. Instead he got a tiny technical advisor credit and some jackasses glued stuff on lizards.

(Perhaps it is for the best that O'Brien did not live long enough to see Hammer studios take the inverse route when remaking One Million B.C. The original film was famous for its lizards playing dinosaurs footage being reused in virtually any cheapo sci-fi flick that couldn't afford its own dinosaur effects--and couldn't afford to pilfer footage from good movies. The remake is equally as famous for hiring O'Brien's protege, Ray Harryhausen, to do its effects and putting Raquel Welch in a fur bikini)

Now that you're adequately depressed, onto the film! We begin in a modern setting--which is a huge mistake, as a Victorian adaptation would almost make the lizards in costume approach charming rather than cheap--as Professor Edward Challenger (Claude Rains!) disembarks from a plane to be swarmed by reporters. Challenger is returning from the Amazon and he claims to have a discovery that will shake modern zoology to its core. The media is used to Challenger's penchant for exaggeration, and they're also equally aware of his temper. Yet Edward Malone (David Hedison!) still chooses to antagonize Challenger about his confrontation with another reporter. He gets an umbrella to the skull and a tumble down the mobile stairs for his insolence and is accosted by Frosty the poodle. On the upside, he makes the acquaintance of Frosty's owner, Jennifer Holmes (Jill St. John!), who appears to also be on her way to the press conference Challenger is holding.

Presiding over the press conference is a professional rival of Challenger's, Professor Summerlee (Richard Haydn), who is already skeptical of whatever Challenger is about to reveal. As Summerlee is setting up Challenger, Jennifer introduces Malone to Lord Roxton (Michael Rennie!), a famous big game hunter and explorer who clearly has a history with Jennifer. Challenger wastes very little time in announcing to the crowd that at the headwaters of the Amazon, atop a mysterious plateau, Challenger spotted live dinosaurs! Of course, he has no proof of this but he expects his word is enough to secure funding for a return expedition for Challenger, Summerlee, and two volunteers.

Roxton volunteers and so does Jennifer, but naturally Challenger does not take Roxton's word that Jennifer is as capable as any man (and this being a film from 1960, she isn't) because he wants no women along. Malone makes a snide comment and Jennifer angrily tells him to volunteer, which he does. Challenger likes the idea of a reporter even less than a woman--until Malone's employer (Jennifer's father) agrees to put forward $100,000 towards the expedition if Malone goes along. And so we are off.

At an outpost in the Amazon, we meet our horrible ethnic stereotype characters: the shifty helicopter pilot, Gomez (Fernando Lamas), and the greedy, cowardly,  brown-noser, Costa (Jay Novello). They alsio discover Jennifer has beat them there and brought along her even more useless kid brother, David (Ray Stricklyn), and Frosty the poodle. Challenger's horrified reaction is supposed to be hilarious, but it's the most sensible one. After some character scenes--Jennifer wants to marry Roxton, Roxton doesn't want to marry anyone, Jennifer suddenly hates Malone, none of this involves dinosaurs--we finally head off to the plateau by helicopter. Somehow, despite the plateau not being all that large and it being daylight, no dinosaurs are spotted from the air.

At night, the explorers make camp but suddenly hear a dinosaur approaching. We get our first glimpses of said "dinosaur" here, although the characters don't. Quick, if you had a camp near a cliff's edge, with a helicopter, lots of equipment, a roaring fire, and guns and you heard a large animal approaching, what would you do? If you said, "Well, I sure as Hell wouldn't flee into the jungle, in the dark, so I could almost be killed by carnivorous vines and allow a monitor lizard with a frill on its head to push my helicopter over the cliff," then you're smarter than our heroes. Also, at this point Challenger identifies the dinosaur--by sound alone, mind you--as a Brontosaurus.

Well and truly, boned, our heroes head further into the interior of the plateau, where they finally encounter a dinosaur. It's a Rhinoceros iguana with extra horns glued to its head, so it could be an Iguanodon or a Triceratops for all I know. They also encounter a clearly human woman (Vitina Marcus) and Malone gives chase, whereupon he encounters a Big Damn Spider and promptly shoots it dead. (No doubt in revenge for the ending of The Fly) The girl is eventually captured and David begins making goo-goo eyes at her.

Of course, if there's one native girl, there are probably other natives--and they aren't likely to be very friendly. Add to that the fact that they have no means of escape, they find a notebook from another doomed expedition (sent by Roxton, it turns out), Gomez definitely has a secret agenda, and, oh yeah, the dinosaurs all around; things don't look very good for our heroes. Or the audience, really.

The remaining running time only barely delivers on its promise of dinosaurs and when it does, you wish it hadn't. Malone and Jennifer are almost attacked by the "Brontosaurus" when what I can only assume to be an Allosaurus--an alligator or caiman (it varies from shot-to-shot) with horns and fins glued to it--appears and the two creatures engage in combat. And they actually do engage in combat. The caiman latches onto the foreleg of the monitor lizard and death rolls it, the monitor clamps its jaws over the caiman's eyes. The blood in a few shots is not stage blood. None of the wounds shown appear to be fatal, so maybe both animals lived long lives after this, but there is still a special place in Hell for the bastards who sprung for a full-size prop tail for the actors to interact with but felt that it was necessary to make two reptiles fight for our entertainment.

The only other dinosaurs in the movie are: a monitor lizard with horns and a fin, that lurks in a pool of water inside a volcano and gets the honor of being the only dinosaur to eat anybody; and a Tokay gecko with the same horns and fin. The Tokay is supposed to be a hatchling, and given the fin and horn pattern and where the egg was found it must be the same species as the water monster. Since Challenger identifies it as a baby Tyrannosaurus (and Claude Rains deserves an Oscar for delivering that line as if he believes it), that must mean the monitor lizard was a T-Rex as well. "Sea monster" is certainly an interpretation of the monster that I don't think any other movie has ever done!

So, The Lost World is a giant finger to Willis O'Brien and to people who care about the welfare of reptiles. It's also just not a very good movie. Oh, Claude Rains makes a way better Challenger than the movie deserves and there's unintentional comedy to be had from watching the "dinosaurs" aside from when they're made to fight--but there's so little of that to go around. You'd think with the money saved on effects they'd have done more with them. Hell, where's the recreation of the 1925 film's rampaging Brontosaurus done with a lizard on miniature London set?!

On the other hand, there is a monitor lizard with a doll in its mouth to indicate it is chowing down on a hapless victim, and that almost excuses all the film's prior sins. Almost.

Posted by Random Deinonychus at 11:11 PM