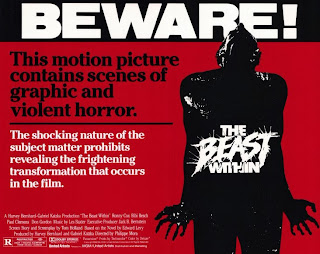 I love werewolves. I'm not sure why, exactly. Maybe it's because wolves are among my favorite animals--I always hated how they were the villains of most fairy tales as a child--or maybe it's because I find the ability to ability to change into something less mundane than a human being very appealing.

And yes, I realize most werewolves don't have a choice in the matter because it's a curse they can't control. You take the bad with the good, I say.

At any rate, werewolves are near the top of my list of favorite monsters--or would be, if I had an actual list--and like just killer crocodilians I am inevitably drawn towards films about them. Unfortunately, as with movies about killer crocodilians, most werewolf movies are terrible.

However, another awesome aspect of werewolves is that you can still basically tell a werewolf story without it actually being about a man who turns into a wolf. Any basic shapeshifter can follow the werewolf template.

And sometimes that means you get a were-cicada. Sort of.

The town of Nioba, Mississippi has a terrible secret. Unfortunately, newlyweds Caroline (Bibi Besch!) and Eli MacCleary (Ronny Cox!) don't have any inkling of that as they pass through it on their honeymoon in 1964. So when they get a flat tire just outside of Nioba, Eli thinks nothing of leaving Caroline alone in the car with their dog while he hikes back to get a tow.

Unknown to either of the MacCreary's, someone or something in a farmhouse cellar has just broken free of his chains. The cellar dweller quickly makes its way through the woods to the wrecked car. It promptly kills the dog--as is required by the monsters' union--and chases Caroline until she knocks herself out on a tree. Her barely glimpsed assailant then rapes her and departs, leaving her limp form to be discovered by Eli when he returns with the tow truck. As they leave the scene, two gunshots ring out--so presumably the fiend that raped Caroline has been dealt with.

Seventeen years later, Caroline and Eli have put the horror of that night far behind them--except that now their son, Michael (Paul Clemens), is sick and no doctor in Mississippi can figure out what is wrong with him. So Caroline forces Eli to face the truth--Michael may not be Eli's son, biologically. The only thing to do is to leave Michael in the hospital's care and go to Nioba to see what they can find out.

The town is somewhat less than helpful. Judge Curwin (Don Gordon) acts as if he's never even heard of a rape before when Eli meets with him. Edwin Curwin (Logan Ramsey!) at the newspaper office takes a lot of convincing to let Caroline glance at the old papers, and when she takes a newspaper front page discussing the murder of one Lionel Curwin in 1964, Edwin and the Judge have a secret meeting about how bad this is.

When Caroline and Eli meet with Sheriff Pool (L.Q. Jones) and Deputy Herbert (Meschach Taylor!), they find the Sheriff is quite a bit more helpful--but then he's relatively new, since he took over when the old Sheriff died in 1969. He tells them that Lionel Curwin wasn't just murdered--he was torn apart and partially eaten before his home was burned down. Worse, the culprit was never found.

Michael, as it turns out, may have some insight on that. He has been hearing a voice in his head and seeing visions of himself inside an old farmhouse and trying desperately to keep the trapdoor to the cellar closed as something tries to get out. Michael wakes from his latest vision and escapes the hospital in a car (no doubt stolen) and makes his way to Nioba. Once there, he finds the farmhouse and investigates the basement...

...Michael then finds himself at the house of Edwin Curwin. Edwin makes small talk with Michael after inviting him in for hamburgers, thinking him a grocery delivery boy. Well, until the sound of an oscillating synthesizer effect--er, I mean "cicadas buzzing"--gets Edwin's attention. And then Michael seems to undergo a subtle transformation and tears Edwin's throat out with his teeth.

Michael stumbles away from the scene with surprisingly no blood on himself and finds himself at the home of Amanda Platt (Katherine "Kitty" Moffat), whereupon he collapses and is taken to the office of Doc Shoonmaker (R.G. Armstrong!). Michael seems miraculously recovered and Eli and Caroline are eager to depart, but Michael refuses. He wants to stay in Nioba a while. Eli assumes this is because Michael has taken a shine to Amanda.

He's not entirely mistaken. Michael goes to see Amanda to thank her for helping him and they go for a walk in the woods by a bog. When Michael finds out Amanda's father is Horace Platt (John Dennis Johnston!), a cousin to Lionel Curwin, he recoils momentarily but then ends up making out with Amanda...until her dog interrupts by bringing them a severed arm he's just dug up.

The Sheriff and several townsfolk find far more skeletons, bones, and body parts buried in the bog. Worse, they seem to be the bodies of people thought to have been buried in the town cemetery--and they all show signs of being gnawed on. Combined with Edwin Curwin's death, it seems as though Lionel Curwin's murderer has returned--and that something far more sinister is also going on.

They're right on both counts. A sinister conspiracy has been hidden under the town's nose for the past 17 years, and Michael is killing off the conspirators one by one. Only, it's not actually Michael. Michael is just a shell and soon that shell will be shed, just like a cicada's skin. Only this is going to be a lot more unpleasant for everyone involved.

The Beast Within, while ostensibly based on a book I've yet to read, seems largely to have been conceived as a cash-in on The Howling and An American Werewolf In London--in that it is, effectively, all a set-up for a climactic transformation sequence when the titular beast within makes its way out of Michael. Even the film's promotional material is all geared towards selling you on the last 15 minutes or so of the film.

Which is a damn shame, really, because it's a fantastically silly sequence. First off, it involves most of the surviving characters standing around Michael's hospital bed and watching as he turns into a gooey monster. Secondly, the effects take their cue more from Rob Bottin's work on The Howling than the superior work of Rick Baker on An American Werewolf In London. The transformation scenes in the latter follow a sequential pattern, so you can see how David Naughton goes from human to enormous wolf in the span of a few minutes and it all looks as "realistic" as such a thing can. Whereas, the effects in the former don't follow any obvious sequential order and consist of a lot of silly looking air bladders. However, The Howling at least is a case of quantity over quality--The Beast Within has one big set piece and it looks sloppy.

Also, despite what most people will say when they describe this movie--and what I, myself, said above--it is not actually about a were-cicada. Michael's transformation is meant to mirror a cicada's in that he is the vengeful reincarnation of a man who apparently had some kind of kinship with nature that allowed him to resurrect himself by impregnating Caroline and then bursting out of Michael's body 17 years later. And "cicadas buzzing" accompany him when he goes on his rampage--why the filmmakers couldn't just sample cicadas like dozens of other horror movies have done for their non-cicada-based monsters is beyond me--but he looks nothing like a cicada.

And that's a damn shame, because this... 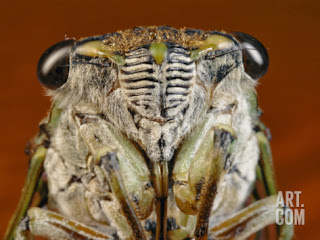 ...looks a lot cooler than this:

That's, wisely, a much better shot of the creature than you'll get in the film. It's a pretty terrible suit and keeps to the shadows. Honestly, a cicada man would have looked much better. Just watch the "Garamon Strikes Back" episode of Ultra Q,
So, the monster blows. How about the rest of the film?

Well, on the one hand, the film makes no sense. There's no genuine explanation of how Billy Connors, the wronged man who found a supernatural way to return to deliver justice to a corrupt town, managed this specific trick. That, by itself, is not a problem. However, when the protagonists eventually uncover Billy's skeleton in the basement where he had been chained and fed only on corpses, Deputy Herbert comments that it can't be Billy because it's "too big", and indeed his skeleton looks inhuman. Unless you're a Wendigo, eating human flesh generally doesn't transform you into an ogre. Again, not a huge deal, but you can tell that--as the director apparently claims--there was some exposition left on the cutting room floor.

Also, the film should really have been more about Michael. This is basically a werewolf story, after all. The Wolf Man didn't focus on the town constable and Larry Talbot's father figuring out what happened and then occasionally cut back to Larry wolfing out and killing someone. An American Werewolf In London didn't focus on the doctor's attempt to find out what happened to David and then cut back to him going on rampage.

Sure, Michael and Amanda have scenes together and Michael isn't kept in the background except for when he goes murder-happy--but we never get a true sense of him as anything more than a MacGuffin. Hell, when his parents are told what Billy Connors was like they recognize similar traits in Michael--but we sure as hell don't. We should feel for Michael as he begs to be killed before the monster inside him can tear its way out. Instead, our reaction to seeing his hollowed corpse is only slightly more blasé than his parents. And I can't even blame Paul Clemens for Michael's lack of dimension, as this is clearly a structural fault.

That said, this is is actually not a bad film. When we eventually find out the town's dark secret, it is wonderfully macabre. The performances are all wonderful, as well. And while I must warn that the film does contain two rather graphic rape scenes, they are A) nowhere near as brutal as, say, The Girl With The Dragon Tattoo and B) don't exist solely as an excuse for some nudity as in most films of this era.

Ultimately, the film just needed a couple more runs over the screenplay and a better monster and this might be a classic. And hey, the black guy makes it out alive! Sad that that's enough of a rarity that I need to comment on it, huh?

All in all, it's worth seeing if you're into horror movies, but you certainly aren't missing a lost classic if you skip it.

Also, as with Saturn 3, Shout! Factory has done a marvelous job with the Blu-ray for this film. It doesn't have much in the way of special features, but it sure looks amazing. Though I'm sure the monster suit would be happier if it didn't.

Posted by Random Deinonychus at 1:40 PM