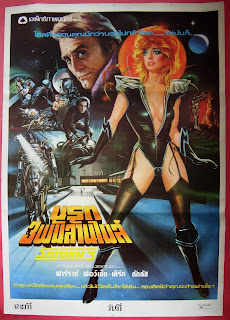 For a species that went from scrounging for nuts and berries to landing on the moon, humans are surprisingly resentful of change. In fact the majority of us either hate it or fear it. Nothing quite demonstrates this as well as our fear of robots run amok, turning on their masters.

A robot is, in essence, nothing but a tool. Most of us have no innate fear of a hammer or a car, beyond simple learned caution. Yet put a robot in front of us and a fairly large amount of us will be very uneasy almost immediately.

Science fiction and horror movies are both responsible for this uneasiness and reacting to it. Robots have been turning on us so frequently for the past century that it's remarkable anybody in these movies keeps making the damn things.

Yet we are a species that thrives on change as much as we fear it. Fire may burn us, but we still rely on it. Cars kill hundreds of thousands of us each year, but damned if we're going to scrap them all. And so it must be with robots. So what if one day they'll overthrow our civilization, they're awesome!

Saturn 3 opens auspiciously by ripping off three different highly influential movies at once. First, its obvious immediate inspiration (or, at least, inspiration for being greenlit) with its title forming piece by piece as in Alien. Then, we open with an obscenely large spaceship looming over the camera, as in Star Wars. And the sequence is accompanied by a theme that could only be described as the composer being told to get as close to "Thus Spake Zarathustra"as possible without just outright playing it.

The Not-Star Destroyer is currently in orbit of Saturn, about to launch a one-man lander to Saturn 3, a hydroponics laboratory on an unnamed moon of Saturn. The lander's occupant is running late for its launch. He's about to running even later than he realizes, for waiting for him in the locker room is Captain Benson (Harvey Keitel!), already suited up and waiting for his comrade. As the hapless tardy astronaut tosses out mocking expositional dialogue about how Benson was declared too mentally unstable for the mission, he fails to notice Benson strapping himself in and reaching for the emergency hatch release.

By the time Captain Deadmeat notices what Benson is up to, the emergency hatch has been opened and he is immediately sucked out into space. Well, he was in his suit so he might have survived that--except whomever thought putting an airlock in the ceiling of a locker room was a good idea also thought it should be placed behind metal slats so that anybody blown out by decompression would be trisected on their way out. There's also no alarm to alert anybody on the ship that an emergency hatch was blown, so Benson is able to close it behind the poor minced bastard and take his place when the lander is launched.

The lander's route, amusingly enough, takes it through the rings of Saturn. This is kind of a flawed idea on several levels. First, while the effects for this bit are ambitious, they're only slightly more convincing than the infamous asteroid belt fight in Godzilla vs. Space Godzilla. Two, I haven't the slightest idea why you would deliberately fly a vehicle that is mostly a transparent bubble through a dense field of debris.

Somehow, Benson makes it to Saturn 3 and is greeted by its lone occupants Adam (Kirk Douglas!) and Alex (Farah Fawcett!)--the latter of whom, naturally, Benson instantly begins to lust after. Unsurprisingly for a man willing to murder to come to the place, Benson also wastes no time in being a complete asshole to both of them about how they are no producing enough food for the starving people back on Earth and in other corners of the solar system. Adam objects that they are producing as much as they possibly can, though he neglects to add, "considering some moron decided to station a small hydroponic food-producing facility on the far side of Saturn so that it routinely is unreachable for nearly a month at a time and then staff it with two people."

Benson advises that he is there to help increase their production. Adam and Alex are understandably confused about how one extra person is going to do much of anything to help production, but Benson is not actually there to help them grow plants--he's come to set up their new robot.

Their new robot, whom Benson christens "Hector", is one of the new Demigod series. The Demigod series are robots that look like a human--though the human in this case is seven feet tall, headless, and has been flayed. Demigods are also, technically, cyborgs. Instead of a traditional CPU they use a jar filled with genetically engineered human brain tissue. In this case, that brain-in-a-jar is programmed off of Benson's own brain through a remote signal jack implanted in Benson's skull.

I can only assume the pitch for this robot was, "Let's make a robot that is guaranteed to go murder-happy!"

Hector, however, takes a while to be ready for action. So the immediate danger is from Benson. See, Adam and Alex are actually romantically involved--exclusively. The idea that Alex's vagina is not meant for public consumption so angers and bewilders Benson that you can only assume he's not wearing a fedora because he didn't have room for it in the lander.

Of course, Benson is equally as bewildered by the concept of "dogs."
Yeah, Adam and Alex have a dog. I didn't mention the dog because this is a horror movie, so we all know we shouldn't get attached to the dog.

As Adam, Alex, and Benson work side-by-side--Adam and Alex on whatever they Hell it is they do, Benson on getting Hector running--Benson's predatory interest in Alex quickly becomes apparent to Adam. Adam's reaction is to worry about how old he's getting and that maybe Alex would be more interested in somebody else. To be fair, he at least worries first that Benson might be a threat to Alex before worrying about whether she's bored of his withered hide, but damn, Adam.

Of course, once Benson does get Hector running it turns out this triangle is going to grow another corner. See, Hector got the information in Benson's head, which means he's also a murderous psychopath who lusts after Alex. Unfortunately for Benson, Hector also has enough of his own mind to see Benson as just another rival for Alex's attentions. So when things inevitably go pear shaped, Benson is just as likely to be on the lecherous cyborg's chopping block.

Saturn 3 is, quite frankly, not a very good movie. Going into it, I had encountered exactly one positive review of it. Most people find it dull, stupid, and full of way more naked sexagenarian Kirk Douglas than most people are comfortable with. (Though Keitel stays fully clothed throughout, so that's an interesting change of pace)

Most people are technically right. As my synopsis indicates, the film is very deliberately paced--as it has to be, since you can't do a body count flick with exactly three main characters--and rock-stupid in many places. That said, it coasts by a lot on the surprising chemistry of Kirk Douglas and Farah Fawcett, and by the surprisingly compelling Hector. The cyborg gets no spoken lines up until the last quarter of the film, its face is little more than two LED lights on a swivel arm and its body, while subtly horrifying, is clumsy and largely immobile. This is largely due to the fact that all the wires and tubes on the robot suit were liable to pop off any time the actor inside moved. And yet, damned if Hector isn't a compelling villain.

He's certainly more compelling than Benson. Harvey Keitel's performance is incredibly, well, robotic. How much of this is due to Keitel's lack of emoting and how much is due to the fact that he is very obviously dubbed (by an uncredited Roy Dotrice) is hard to say. However, he's definitely the weak point in the film.

The film as a whole, pleasantly surprised me. In fact, I quite dug it--right up until the climax and the ending. For one, the way Hector is finally dealt with is incredibly abrupt and perfunctory given all the build-up to it. Secondly, the film ends on a note that is either happy or ambivalent--yet the score would have us believing it was some kind of sinister stinger. I found it disappointing and I was mostly digging the movie from its gloriously silly beginning. I can only imagine to somebody who was already hating it that it would just be the final insult.

Also, I have to say that while he may have been well past the point where one is traditionally expected to be filmed strangling Harvey Keitel whilst wearing nothing but a grimace, Kirk Douglas still looked damned good. So I, for one, didn't mind. Your mileage may vary.

I'd be remiss if I didn't also point out that the new Blu-ray from Shout! Factory looks amazing, as well. God bless them for continuing to do the Lord's work and release high-quality releases of movies most people would prefer to forget ever existed. Hell, they even fully restored the deleted scene the space bondage get-up Farah Fawcett is sporting in the Thai poster above hails from. This was apparently a big selling point in most of the film's original promotions.

Posted by Random Deinonychus at 4:18 PM