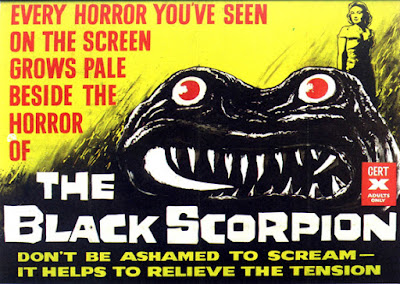 For both very good reasons and very, very silly reasons, we humans are terrified of arthropods--specifically insects and spiders. We are so terrified of them that we cannot help imagining how deadly they would be if they were bigger than us, even though we know physiology and physics prevent this from happening.

Well, on dry land, anyway, but that's a whole other discussion.

Of course, aside from being terrifying, giant scorpions are just plain awesome. It's no wonder then that when Them! and other giant arthropod films like Tarantula proved to be big hits, somebody in Hollywood was going to realize that giant scorpions would be a perfect way to cash in on the trend. Even better, that somebody tapped the man who brought King Kong to life, Willis O'Brien, to do the stop-motion creature effects for their killer scorpion flick.

Now, if you're wondering, based on the poster above--which Warner Archive used a variation of for their recent Blu-ray--what the hell a giant fanged frog has to do with scorpions, well, you're in for a treat.

You see, even in a film with stop-motion creatures, filmmakers usually liked to have a non-animated prop for close-ups. Unfortunately, they didn't usually seem to bother making sure that whomever made that prop coordinated with the animators to make sure that the monsters matched. And so, this film was blessed (or cursed, depending on how you look at it) with a googly-eyed frog-faced scorpion puppet that drools.

It's utterly ridiculous, but naturally I kind of love it.

Now, any film about scorpions that are big enough to consider humans viable prey is going to need to explain where those scorpions came from. The Black Scorpion decides to break with the major trend of the day, as its scorpions are not regular scorpions made big by radiation. No, indeed, these monsters are a prehistoric variety released from eons-long hibernation by the eruption of a volcano in Mexico.

The eruption of a new volcano, that is, created after severe earthquakes. Mexican geologist Dr. Arturo Ramos (Carlos Rivas) is sent to study this phenomenon, accompanied by American geologist Dr. Hank Scott (Richard Denning, best known as the reckless businessman in The Creature From The Black Lagoon). As they drive their jeep through the wrecked countryside they hear a strange roar (along with the unmistakable sound effects of the ants from Them!) and then come upon a wrecked house.

The house doesn't appear to have been wrecked in the earthquakes and next to it is a police car that has been smashed. The radio still works, however, which is good--not only do the two scientists find a baby alone in his crib, but they also find the dead body of the police officer. The dead man looks terrified and he has emptied the entire clip of his sidearm at something.

When the two get to town, they find that this is not an isolated incident. Cattle and people have gone missing or been found dead and the villagers believe a legendary demon bull is on the loose. Somewhat more helpfully, a local doctor has discovered both that the cop was killed by some kind of venom injected into the base of his neck, and that whatever killed him left footprints that yield a sizable plaster cast. He's sent the venom to be tested by an expert that both Hank and Ramos are familiar with, so they know an answer will be coming soon enough.

During their originally planned surveys of the area, Hank gets to meet-cute with Teresa Alvarez (Mara Corday, a B-movie legend in her own right) when he and Ramos come to her aid when she falls off her horse. Teresa is the owner of the nearby Miraflores (or, "Look! Flowers!") Ranch, and she has been struggling with how these strange incidents are scaring away her cowhands.

Of course, the answer to what is going on comes a little quicker than our heroes would probably like. When they all get to Miraflores, Teresa introduces them to a young boy in her care named Juanito (Mario Navarro), who will be exactly as irritating as you are already imagining. Ramos reveals that he found a chunk of obsidian while they were rescuing Teresa and reveals that it has a scorpion inside it. Much more astounding than that, however, is that when Ramos cracks the obsidian open the scorpion is freed and is still alive. And it's squeaking like a bat, to show it is "prehistoric," I guess.

This is, of course, patently ridiculous. Even the movie itself points out that obsidian is made from cooled lava. That scorpion would have been burnt to ash, not locked in suspended animation.

Just then, however, the phone rings because the telephone repairmen are calling the ranch to test the lines they just repaired. Which means Teresa and Hank are still on the line when a giant scorpion appears and attacks the repairmen. The last guy, who was on the pole, gets it worst of all since he is crushed in the scorpion's claws until he is coughing up blood and then gets stung.

Hank and Ramos are preparing to head to where the men were in order to investigate, but another giant scorpion makes its appearance at the ranch and saves them the trouble. Guns don't even tickle it and soon everyone is fleeing the ranch, while the village is terrorized by another scorpion. Of course, because the money for this movie's effects gradually ran out we get the first clear impact of that here: the scorpion that menaces the village is just a black silhouette that was matted into the frame with the intention of being replaced by the actual animation later.

Well, now that everyone is well aware of what has been plaguing the countryside lately, the military brings in Dr. Velasco (Carlos Muzquiz) to consult, since he was the doctor who examined the venom and footprint--as well as being an expert on entomology. Velasco believes the best bet is to gas the cavern that they believe is the scorpions' nest during the day, but he needs to know if the cavern is too big to be gassed, so Hank and Ramos volunteer to go down and investigate.

Teresa is not pleased with this idea, but when one of her ranch hands manages to fall into the fissure she understandably wants them to find out if he is alive or not. Unsurprisingly, he will not be alive when they finally get down to the bottomless pit filled with killer arachnids--he doesn't even leave a body behind!

Hank and Ramos find a few surprises in the cave, none of which are terribly welcome. First, the cave is home to over strange beasts--like a thirty-foot worm with tentacles, which soon becomes scorpion chow. Second, there is a scorpion in the cave that dwarfs all the other scorpions and even kills and eats the smaller ones when they displease it. Third, Juanito hitched a ride in their lift and they need to rescue him from a trapdoor spider-crab-potato bug.

(Fun fact, the weird spider and the worm are Willis O'Brien getting to finally use some of the monster models from the infamous unused "spider sequence" from the original King Kong.)

The upside is that they now know of a weakness that the scorpions have, since they watch the big one kill another by flipping it over and stinging it in the soft underside of its throat. Unforunately, after their lift is wrecked by a scorpion they no longer have the gas to use against the monsters and barely get out alive. The military opts for Plan B, which is just to dynamite the fissure closed and hope for the best.

Sure enough, the scorpions find another way out and wreck a passenger train. It's a genuinely unsettling sequence as we watch the beasts go into a feeding frenzy over the hapless passengers. I suppose the good news is that the frenzy gets so extreme that the big scorpion kills off all the smaller ones in quick succession. The bad news is that now there is a huge, hungry, and pissed-off scorpion headed right for Mexico City...

As a monster movie, The Black Scorpion is fairly standard stuff. Aside from being set in Mexico, there isn't a lot to differentiate this one from similar 1950s monster fare. And the budget clearly hampers it in many ways, since the special effects range from great to obviously rushed.

However, I think that the choice of monsters more than makes up for any shortcomings of budget and story. Even with the goofy puppet scorpions for close-ups, these are incredibly vivid monsters. O'Brien and his team do an amazing job imbuing these largely faceless creatures with life and personality.

The way that the final monster is defeated is also satisfyingly novel, even if it does involve a random character managing to electrocute himself in a moment that I'm still not sure if we were supposed to find funny or not. Of course, I'm always happy when the way a monster is defeated is more complicated than just "blow it up."

Of course, this film has bigger flaws than just its budget. Its attempt to build mystery and suspense early on ends up dragging instead. Not nearly enough to make the film boring, but this film is called The Black Scorpion, so it doesn't really help to play it coy for so long. Then again, that does make one even more grateful when the scorpions show up--and admittedly the film keeps a great pace going from there on in.

This film is far from a classic of the period like its obvious inspiration, Them!--but it is definitely a lot of fun. And the Blu-ray from Warner Archives has some amazing extras if you are a stop-motion monster fan like I am. I highly recommend giving it a look, if you are so inclined.

This has concluded Day 2 of HubrisWeen 2018! To see what the other Celluloid Zeroes chose for B, click the banner above!
Posted by Random Deinonychus at 4:00 AM