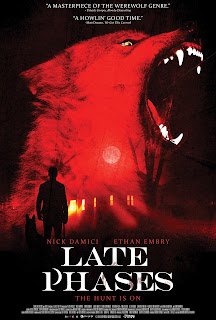 The trouble with werewolf movies isn't just that they are often terrible, but that they don't seem to come out out all that frequently. Presumably it's because they just require more resources to make than a cheapo vampire or zombie film. So I rarely hear about a new werewolf film at all, much less one that gets my attention.

So in 2014 it was a rare thing to hear of two that got my attention. Sadly, the one that really got me excited was WolfCop. But there was another film, a more serious one that I heard of briefly and then forgot until it turned up on Netflix. And then I heard more positive buzz about it and decided to check it out.

Happily, it turns out that 2014 did give us one really good werewolf film after all.

We open at a headstone vendor, as blind Vietnam veteran Ambrose McKinley (Nick Damici) is examining headstones, with his seeing-eye dog, Shadow, at his side. He ends up not finding anything he likes and tells the owner he'll be back. He still has time, after all. Ambrose's son, Will (Ethan Embry!) is waiting at the car. It's an awkward drive since Ambrose is rather terse with his on and chides him for texting while driving, which Will is amazed he can even tell he's doing. Will was just texting his wife, Anne (Erin Cummings!), to let her know that he'll be late for dinner.

Their destination currently is Crescent Bay, the retirement community that Ambrose is moving into. The guard at the gate is busy watching what sounds like porn and barely even acknowledges Will before letting him in. Ambrose half-jokingly chides at Will for calling the guy an asshole--he doesn't need his son to turn the folks he'll be living with against him, he can do that on his own. Will assures his father that the place is nice, but then asks why Shadow is freaking out and whimpering. Ambrose tells him it's because Will has his mother's scent, which is the first time he's mentioned her since the funeral, apparently.

They pull up to the house, apparently ahead of the movers. The house is therefore totally empty as they walk in, and as he feels along the wall, Ambrose discovers some strange scratches in the dry wall--and what seems to be a broken off claw. Going next door, he bumps into a garage sale run by his neighbor, Delores (Karen Lynn Gorney). The two hit it off almost immediately, somewhat flirtatiously. Ambrose asks her to identify what he found in the wall, and she could only sugegst it's some kind of a claw. Will then comes to collect his father, as the movers are pulling up and Will has to get going.

While he's trying to unload things that the movers have left, Ambrose is intruded upon by the community's welcoming committee: Emma (Caitlin O'Heaney), Gloria (Rutanya Alda), and Clarissa (Tina Louise). It does not go well, thanks to Ambrose's prickly persona and their stuffy attitudes--especially when they see he owns a loaded revolver. Having thus alienated the rest of the neighborhood, Ambrose settles in for the night, feeding Shadow and shutting all the windows.

It's a full moon that night, and as Delores answers a call from her daughter, Victoria (Karron Gaves), who's calling to try and get out of their plans tomorrow, we get our first glimpse of the werewolf as it walks past the window behind her. This was when I knew I would like this movie, because the first shot of the werewolf is not accompanied by a loud shock sting and there's no attempt made to draw your attention to it, aside from its position in the frame. It's a wonderful touch and somehow the fact that you could totally miss it without paying close attention makes it that much better.

As Ambrose discovers the movers didn't bother to put his mattress in the actual bedroom, he also hears an odd noise from outside and realizes Shadow is acting strangely. Meanwhile, Dolores shoots down her daughter's suggestion of getting her another dog to keep her company because the last three have run away. Oh, but she still has the doggy door--and something big and hairy is trying to come through it just now. When it doesn't fit, the beats smashes the door in. Hearing the commotion, Ambrose pounds on their shared wall to ask if Delores is okay.

She's very much not okay, as there is a werewolf disemboweling her at present. And when it hears Ambrose pounding on the wall, it comes for him. As Ambrose tries desperately to find his gun, Shadow attacks and wards off the werewolf. Unfortunately, the werewolf wins and mortally wounds Shadow--but it takes off when it sees Ambrose's gun. Unfortunately, Ambrose didn't have a phone set up yet, so he has no choice but to put poor Shadow out of his misery.

The next morning the movers come back, having forgotten something the day before. As they argue about whether old people or patchouli smell worse, they discover the scene of carnage. Ambrose is still sitting on the floor with the dead Shadow on his lap and begs for help, and then they find Delores next door.

Will and Anne go with Ambrose to the animal hospital. Anne chides Will for leaving his father alone in a new house without a phone. Meanwhile, the veterinarian asks Ambrose if he has any idea what attacked him. She thinks bear or mountain lion, but he tells her it smelled like a dog--and indeed, the vet does think the wounds look vaguely like a dog's teeth. She mentions that these animal attacks seem to happen every month at Crescent Bay, which gets Ambrose's attention. The vet attributes it to them being right on the edge of the woods, in an isolated community. However, Ambrose is already making connections in his mind.

To Anne and Will's chagrin, Ambrose insists on taking Shadow home to bury him and declines their offer to take him to get a new seeing-eye dog. Back home, the police have arrived on the scene. Delores' daughter, Victoria, is there and all a mix of anger and grief. Ambrose makes quite a sight of himself, walking up to her and the officers with blood all over his shirt. He gives his condolences to Victoria, who then--fighting back tears--says she should have taken her mother out of Crescent Bay as soon as she heard "the stories" about it. This also gets Ambrose thinking.

The cops inform Ambrose they don't need a statement. They've declared it an animal attack and are fine with leaving it at that. It happens in a place like this, on the edge of the woods with elderly folks who can't defend themselves. Ambrose gets started on digging a grave for Shadow as Anne walks up and offers her sympathies. She mentions off hand the fact that it's a full moon, and a final piece of the puzzle falls into place for Ambrose.

Yep, he's guessed it already. What attacked him and killed Delores and Shadow was a werewolf. With a month until the next full moon, Ambrose decides he he is going to figure out who the werewolf is--and end it.
Normally, I'd keep going but if a movie has a big switcheroo or a mystery that I feel needs to be fresh going in, I'm rather reluctant to ruin it so I'll actually be stopping my synopsis early. I do want to mention that the film also features Tom Noonan as a priest and a nigh-unrecognizable Lance Guest as a friend of the priest who helps transport the parishioners as needed. The identity of the werewolf is actually spoiled fairly early on, but I'd still rather not reveal it, nor spoil the ending.

From here on in, the movie is about Ambrose becoming more involved in the community with the aim of uncovering the werewolf's identity. And, ultimately, it builds to a climactic confrontation where Ambrose prepares himself for a siege and he finally gets to face the werewolf down for a fight to the death.

The middle stretch of the film, therefore, might test the patience of some viewers. It's very character driven, with none of the werewolf action that precedes or follows it. However, while I don't have the greatest attention span, I don't have much sympathy for those who can't handle it. There's a lot of great stuff there and the mystery and Ambrose's preparations for siege are fun to watch--as well as the preparations of the werewolf, once it knows it's been found out.

Really, it's hard not to see this film as a more straightforward Bubba Hotep and I'm far from the first person to make that comparison. Both films focus on an elderly community nobody gives a shit about being preyed on by a supernatural creature and both have some things to say about the poor treatment of the elderly in American society. Of course, Bubba Hotep managed to be an incredibly touching and affecting story, despite its completely gonzo concept. Late Phases, quite frankly, does not succeed nearly as well--but that does not mean it doesn't try its damnedest.

A lot of the film's success is definitely down to Nick Damici, who has to carry the majority of the film. He makes a surprisingly sympathetic asshole, someone angry at the world and too far past caring if he rubs people the wrong way. He also does a pretty decent job of playing a blind character, although that brings me to the first of the movie's two big weaknesses.

First, the climax is set up with the promise of the really neat idea of Ambrose setting up traps and, well, melee weapons to take on the werewolf. Except his plan then ends up revolving around the use of a sniper rifle (!) with silver bullets. I see no problem with him using silver bullets and silver shotgun shells, but something that requires as much visual acuity as a sniper rifle renders the climax kind of silly.

Second, the film falters in its werewolf when we finally get a good look at it. On the one hand, I have to give credit for a lot of practical effects use. The transformation effects are also similar to WolfCop in that they involve the werewolf basically tearing its way out of its human skin, which works a lot better here. However, the werewolf itself is...well...

If the film was a horror comedy, this design would fit because it's a mix of ugly and cute. This isn't a horror comedy, though. For a movie like this, your werewolf needs to be scary. It needs to be intimidating even when we get a good look at it. So the fact that the werewolf looks more like a were-bunny undercuts all of its menace. It's like a cat gremlin with an underbite.

I am all for trying to be unique with your werewolf design, but this is not the way to go with that, at all. Having most of the werewolf vocalizations be stock monster roars doesn't go far with making it seem less silly, either.

That said, if a movie is good enough it can overcome even a weak monster. Happily, Late Phases is very good. While it's unlikely to bump any candidates off my unofficial "favorite werewolf films of all time" list, there's no denying it's a damn good movie and I highly recommend it.

Today's review is brought to you by the letter L! Click the banner above to see what the other Celluloid Zeroes did for their L.


Posted by Random Deinonychus at 4:00 AM